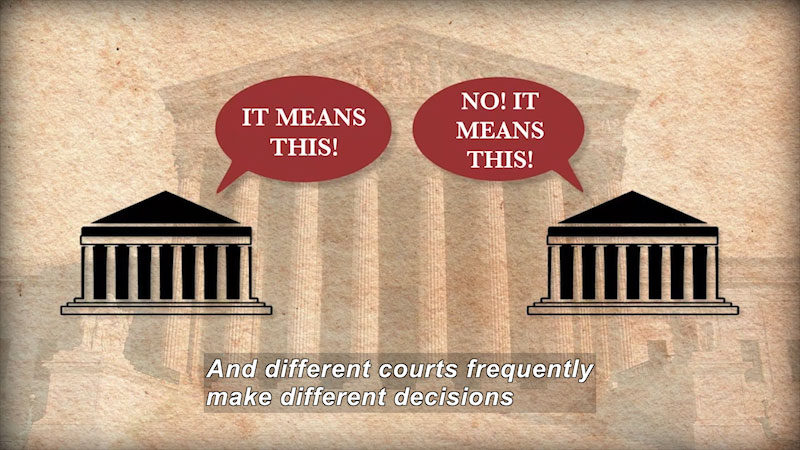 Hi, I'm Andy Rudalevige, professor of government at Bowdoin College. Welcome back to beautiful Brunswick, Maine, Moulton Union, and to Founding Principles. At this point, we need to spend time thinking about civil liberties and civil rights. These terms are closely related. They're often used interchangeably. It might help to think about them as freedoms from and freedoms to. Freedoms from government interference, say, and freedoms to participate in the public sphere actively and equally. Civil liberties would include the freedom of the press and of speech and of religion along with freedom from arbitrary arrest and prosecution. Some people argue they include other things. For instance, is there a right to privacy? Let's turn to the Bill of Rights, the first ten amendments to the Constitution.

The framers of the Constitution did not originally include a Bill of Rights. They figured it wasn't needed. The federal government wouldn't be strong enough to do much damage. There was already language in various state constitutions protecting individual rights. If you included some rights in a special list, didn't that mean any that weren't included could be more readily violated? Not everyone was willing to take the weaknesses and benevolence of the federal government on faith. Patrick Henry, for example, argued that... In the end, an informal trade was arranged. If states like Virginia and New York--closely divided over ratification of the Constitution-- would approve it, a Bill of Rights would quickly be added. In the first Congress in 1789, James Madison took on the task of drafting what were originally 12 proposed amendments sent out to the states for consideration. Ten of them, of course, became the first ten amendments to the Constitution in 1791. It's worth reminding ourselves of what they include. The First Amendment addresses religious freedoms, freedom of speech and the press, the right to public assembly. The Second-- the right to bear arms. Those are in the news. The Third Amendment reflects a particular complaint the American colonists had about the British government-- the quartering of troops in private homes. The next amendments then deal with criminal procedure. The Fourth protects against unreasonable searches and seizures. The Fifth... You don't have to testify against yourself in a criminal case. That's why you "take the fifth" if you exercise your right to remain silent. The Fifth to the Eighth Amendments protect against excessive bail or fines, as well as cruel and unusual punishments. You can't be tried twice for the same crime. You'll get a speedy trial by an impartial jury while represented by an attorney. If the government takes your property, you get paid for it. The Ninth Amendment tries to solve the problem noted earlier by providing that... The Tenth Amendment holds that the powers not given to the United States government by the Constitution remain with the states or with the American people.

So said Supreme Court Justice Robert Jackson in 1943. That sounds clear, except that the Bill of Rights is rife with political controversy. And different courts frequently make different decisions about what terms like "reasonable" or "cruel and unusual" mean in practice and about the legal principles involved. After all, the First Amendment starts by saying... ...and so on. The courts have held "no law" means not too many laws. We'll come back to that in a moment. Go back a few words in that sentence, "Congress shall make no law." Originally, the Bill of Rights only applied to the federal government-- Congress. Could a state establish a religion or search unreasonably? Sure thing. In 1833, the Supreme Court heard a case called Barron v. Baltimore. Baltimore had taken a wharf owned by John Barron without what he considered just compensation. They gave him exactly nothing. Barron sued, citing the Fifth Amendment. The Supreme Court responded, "Too bad, no cash for you." The Court ruled if Maryland didn't protect its citizens against such seizures, he was out of luck. The Bill of Rights would have protected him if the United States government had taken his property. These days the Supreme Court would have no problem ruling in favor of Mr. Barron. It does so all the time. What happened in between? One change is the Fourteenth Amendment, which was ratified in 1868 after the Civil War. Before that, people were first considered citizens of their states and then the national government. But the Fourteenth Amendment specifies that... ...language which overlaps with the Fifth Amendment's guarantee of that same due process. The Supreme Court decided these provisions meant the Bill of Rights applied not only to the federal government but to states. If state residents were U.S. citizens, and states could not abridge the rights of those citizens, the Bill of Rights made sense as a way to define what states could and couldn't do. The bulk of cases extending the Bill of Rights to states-- called incorporation-- took place from the late 1920s to the late 1960s. You can find such cases as early as 1897 and as late as 2010. The Second Amendment was one addition. Until the early 21st century, the Court had not found an individual right to bear arms that limited the states' ability to regulate guns. This proves complex. We could give each amendment its own series-- playing out political and legal interpretations across the sweep of American history. Tell Bowdoin you want that. In the meantime, let's think about issues that arise in a couple of areas. We can start at the top with that injunction... There have been Supreme Court justices who have read that literally and opposed any limitations on speech. But most have not drawn the line so firmly. What about obscenity? Can I say anything I want anytime, anywhere? What about libel? What about commercial speech? Can companies tell lies about their products? Did you know every episode of Founding Principles you watch you get $20 richer and ten pounds thinner?

As you might guess, defining all these terms is itself contentious. When does exaggeration become actionable untruth? One person's piece of art is another's dirty picture. One justice said the best definition of obscenity he could come up with was... What about wartime? Do you know that when you see it? Defining freedom of speech consistent with national security is yet another tricky issue. In 1798, the Sedition Act went so far as to make it a crime... That would make most of the Internet illegal. That act didn't survive long. There was another Sedition Act passed during World War I and plenty of censorship during other wars-- both hot and cold. Justice Oliver Wendell Holmes wrote in 1919 that... After all, he said, "You shouldn't be allowed "to falsely shout 'fire' in a crowded theater and cause a panic." Thus... Holmes had a high bar for his clear and present danger test. After World War II, Congress passed a law restricting freedom of assembly by banning membership in the Communist Party. The Supreme Court said that was fine. Being a member might not lead to immediate action... We might call this a clear and probable danger standard. The outcome might not be likely. If it did happen, it would be horrific. Speech could be banned to be safe. Over time, the Court has been more open to free expression even when it is offensive, especially political speech about ongoing events or public officials. There may be limits on timing and location of such speech but not its content. Holmes's standard seems to have taken hold. Does the speech in question so imminently threaten immediate interference of lawful and pressing purposes of the law that an immediate check is required to save the country? As the court put it in the 1960s... Questions arise about other liberties not mentioned directly in the Constitution. How about a right to contract to sell your labor? In the early 20th century, opponents of laws that limited work hours or required a minimum wage argued these laws unfairly constrained workers' rights. In the 1905 case Lochner v. New York, the Supreme Court agreed. The right of an individual to be free in his person and power to contract labor was one liberty protected in the Fourteenth Amendment. Lochner was a baker. New York law prevented him from working more than 60 hours. The Court held bakers are smart people and are able to assert their rights and care for themselves without the protecting arm of the state interfering with their independence of judgment and action. The Court reversed during the New Deal-- allowing more expansive state action with regard to working conditions. In either direction, the key was not the intelligence of bakers but the role of government in the economy. What about another version of this? Is there a right to privacy? That's not specified in the constitutional text. There are amendments where privacy is implicitly defended. The right to remain silent might imply a right to personal autonomy. Your home can be searched if the government gets a warrant. Perhaps the right to privacy exists in the shadows cast by these other amendments. When this argument has centered on questions of reproductive rights and private relationships, the courts have decided that this is indeed the case. Laws barring access to contraception were struck down in the 1960s. The Court found in its 1973 Roe v. Wade decision that... That remains a controversial decision many decades later. The nature of arguments that arise under the Bill of Rights guarantee they will not be settled soon. There are lots of questions. Is it better to release a guilty person because of too much due process or convict an innocent one because of too little? When does national security override personal freedom? Is it okay to watch or read communications of people who haven't done anything yet, in case they do? History suggests all these questions must be answered in specific ways that rely on specific circumstances and that the answers will vary over time.

(Describer) Back in the union...

Given the complicated balance between an individual's rights and society's needs, between liberty and security, we'll be debating the Bill of Rights as long as we have one to debate. The same when we think about civil rights, equality, and how we define equal protection of the law. Tune in next time, and we'll do just that. Accessibility provided by the U.S. Department of Education.

In this episode, Dr. Andrew Rudalevige explains how civil liberties are protected under the Bill of Rights. Through a study of foundational documents like the Constitution and key Supreme Court cases like Barron v. Baltimore, New York Times v. The United States, and Roe v. Wade, students learn about the ongoing debate about the scope and reach of the Bill of Rights. This episode covers issues like state’s rights, the complexity of freedom of speech, due process of law, clear and probable danger, and libel. Part of the "Founding Principles: American Governance in Theory and Action" series.