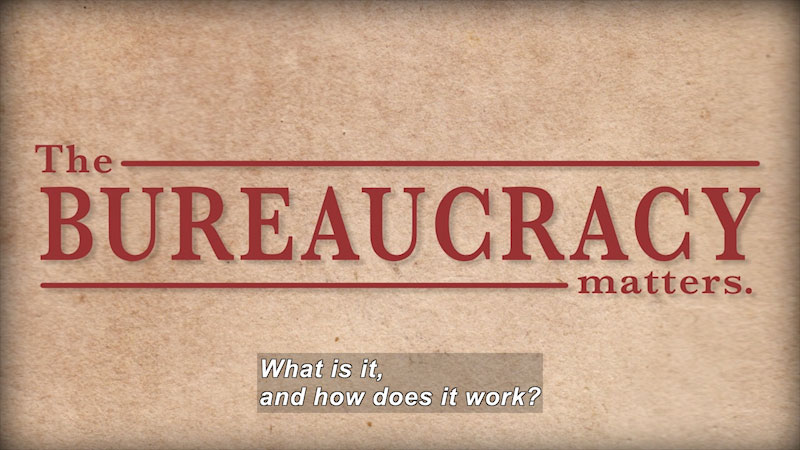 Hi, I'm Andy Rudalevige-- Professor of Government here at Bowdoin College. Welcome back to beautiful Brunswick, Maine and to Founding Principles. Back in 1798, Alexander Hamilton observed, with some alarm, that policy implementation is a pretty iffy business. "How widely different the business of government is from the speculation of it," he said. "How different is the energy of the imagination "from the execution and detail. "Those differences," he said, "cause delay and feebleness." Feeble is one of the nicer words you might hear if you're having a conversation about government bureaucracy. Execution in detail is still one of the most important things we ask government to do. Many of government's tasks are difficult, almost by definition. As Woodrow Wilson said, "It is harder to run a constitution than to frame one." Let's see why.

(Describer) ...with many more pieces.

They've invested a lot of resources in building up management capacities, using the office management and budget to influence what the wider executive branch is up to. Central clearance gives the White House a chance to review proposed legislation, testimony, and regulations. Presidents often use executive orders and other directives to shape how laws are implemented, usually to make sure they're interpreted in the way the President prefers. These directives can be controversial. They often wind up in court, so the judiciary enters the picture as well. This is especially true on regulatory matters. Judges interpret the Constitution, of course, but as we saw back in Episode 5, they also interpret laws and make sure that departments and agencies are implementing those laws in reasonable ways. Sometimes this is about process-- the way a regulation was formulated. But usually, it's about substance too and whether the executive branch is doing things that the law allows. To see this in action, let's turn to a recent and ongoing example stemming from the 2007 Supreme Court case-- Massachusetts v. EPA. The question was whether the Environmental Protection Agency could regulate automotive tailpipe emissions as a pollutant under the Clean Air Act passed by Congress. The EPA under President George W. Bush said no, but others said that tailpipe emissions could, to quote the law... Massachusetts and other states argued that climate change-- partially caused by greenhouse gas emissions-- was endangering just that. A divided court agreed. EPA had to at least look at the question. It rejected taking action for arbitrary and capricious reasons and has refused to comply with a clear statutory command. "Presidential authority," the court intoned... The EPA went back to study the question and decided these emissions were harmful pollutants. When it told the White House, the Bush Administration told the agency to check its math and refused to accept the report. The agency decided to go back to the drawing board-- delaying the issuance until 2009. By then, there was a new president. The Obama White House, unlike its predecessor, was eager to embrace the Supreme Court decision and EPA's new rules. Over several years, aggressive readings of the Clean Air Act wound up as regulations. Some went back to the Supreme Court. They were attacked by groups who thought they were aggressive and misreading the law. Congress held investigative hearings. Many of the EPA's new rules wound up being accepted. Other cases, the court said the agency had gone too far. At every stage, every branch of government had the chance to weigh in. It's a messy process, and we like to complain about bureaucrats and bureaucracy. Spare a thought for the tasks they face. We argue they're inefficient and waste our money, but easy jobs don't get turned over to the government in the first place. Further, unlike a private company, government agencies don't have a simple performance metric, like monetary profit or loss. And finally, and crucially, one person's red tape is another person's vital protection-- helping to fight against corruption, guarantee transparency, and make sure everyone is treated equally. Public sector management can surely be done better. The executive branch will never look like the Fortune 500. Running government like a business sounds great as a campaign promise, but given our separated system and its administrative tasks, it's a promise that can never be kept.

From here, we move to another fundamental aspect of policymaking. One distinctive feature of American politics is how it is defined by rights and liberties of individual citizens. How do we define those? First, the Bill of Rights-- also more than 200 years of arguments about what rights mean in practice. See you there. Accessibility provided by the U.S. Department of Education.

In this episode, Dr. Andrew Rudalevige discusses how government policy is implemented and how government agencies are involved in many aspects of daily life. Through a study of foundational documents like the Constitution and the Supreme Court case Massachusetts v. EPA, students learn about the complex world of bureaucracy and the role of each branch of government in overseeing government agencies. This episode includes a summary of the spoils system, civil service, regulations, statutes, congressional oversight committees, executive orders, and judicial review. Part of the "Founding Principles: American Governance in Theory and Action" series.