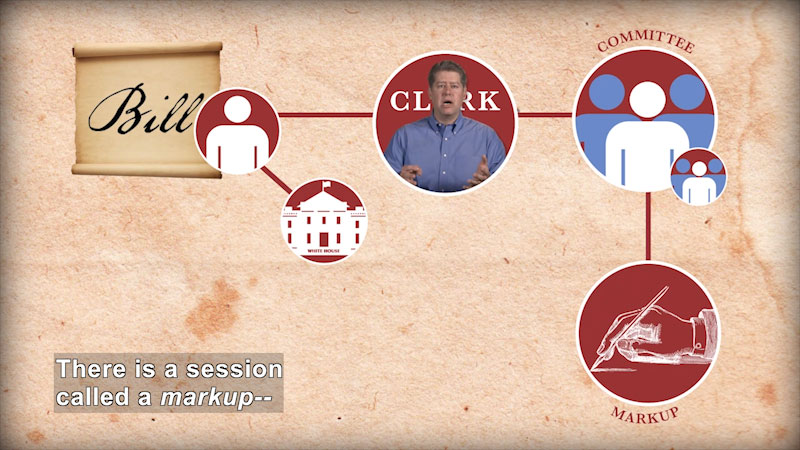 Welcome to Bowdoin College in beautiful Brunswick, Maine and to Founding Principles-- our series introducing you to American government and how it works. I'm Andy Rudalevige, professor of government at Bowdoin. In previous episodes, we've talked about the broad structure of the separation of power system created by the Constitution, the branches of government, and the role of public participation in the process. We want to pull that together and think about the policy produced as a result. We start with the legislative process. Now they say that law is like sausage-- you don't really want to see how it's made.

Well put on your safety goggles. We're going in. Next stop-- the lawmaking factory.

In Episode 3, we talked about the structure of Congress. It's time to dig deeper into how lawmaking works or sometimes doesn't work. Given the importance of the budget process, we'll pay attention to the "power of the purse"-- what James Madison called the complete effectual weapon with which any constitution can arm the immediate representatives of the people. On our way there, let's think about the legislative process more broadly, starting with regular order-- what the textbooks, for that matter the legislative rulebooks, say is supposed to happen. We start in the House of Representatives. A House bill is introduced by handing it to the House clerk by a member of the House. The president cannot submit legislation directly but must find a congressional sponsor. It's referred to a committee-- perhaps subcommittee. The bill will receive a hearing--or more than one-- soliciting testimony on the topic and ways the bill could be improved. There is a session called a markup-- amending the chairman's mark before it is reported to the House floor. The committee votes to report it. We're halfway there. The bill goes to the House Rules Committee. Rules must grant a rule, which determines how long the bill will be debated, how many amendments can be offered, by whom, how much time each will get. The full House takes two votes. It must accept the rule, debate the bill under its terms, and vote on the final product that results. The Senate is doing the same thing. With major legislation, there's a House and Senate version moving through the process at the same time. The key difference is the Senate has more open rules of debate. A senator can offer any amendments. Those amendments don't have to be related to the underlying bill. If you were a senator whose pet project is placing a 25-foot-high statue of Tom Brady in front of National Football League headquarters-- excellent idea, by the way-- you can try to add an amendment to every bill moving through the process. You could talk for as long as you want-- that is, filibuster. Unlike the House, where time spent on the process is limited and spelled out in advance. Let's say after debate, the full House and Senate both pass a version of the bill. Those versions probably differ. Only one might contain the Brady statue provision. At this stage, each chamber appoints members of what's called a conference committee. This committee's job is to put two versions into one compromised version, which goes back to both House and Senate for approval. If that happens, an enrolled bill goes to the president, who has ten days to sign or veto it. If the president signs it, the bill is law. If the president vetoes it, it's not, unless 2/3 of the House and Senate vote to override that veto. Phew! As one scholar observed way back in the 1960s... You can argue that in recent years this obstacle course has gotten more formidable. As the parties in Congress have grown increasingly polarized, the minority party, whichever it is, has wanted to block the majority from achieving any important accomplishments. The majority party has often avoided the regular process I just traced because it tends to be inclusive-- giving the minority party both the chance for substantive input and to slow things down or stop things altogether. So larger-scale bills have often been treated by unorthodox means. Bills get sent to special committees, multiple committees, or no committees at all with rules designed to make amendments to the bill or replace its substance. In the Senate, an increase in filibusters and delaying tactics in the early 21st century led efforts by the majority party to limit amendments and eliminate some uses of the filibuster. In the fall of 2013, for instance, filibusters over presidential appointees, except those to the Supreme Court, were ruled out of order. But majorities change, and the balance between majority rule and minority rights is evolving and elusive.

(Describer) Title: The Power of the Purse and the national budget.

On that happy thought, turn back to the power of the purse. Passing a national budget is one of the important jobs Congress has. After all, the Constitution specifies that... And money, as Alexander Hamilton observed in Federalist 30... As we'll see, the basic functions of government have expanded over time and so has the federal budget. It took the U.S. 60 years to spend a billion dollars and 80 more to get over $100 billion. That figure was matched in a single year of World War II when $91 billion was spent during 1944 alone. Now that 91 billion is about 1.2 trillion in today's dollars. But even so, it looks like a bargain since the fiscal year 2015 budget ran to $3.7 trillion. As Senate Leader Everett Dirksen supposedly said, "A billion here and a billion there, and pretty soon, you're talking about real money." What does that real money buy? Well 65% of the budget-- some $2.4 trillion-- is devoted to what's called mandatory spending, or entitlements. Another 6%, or $229 billion, pays interest on the national debt. More on those in a second. The remainder is termed discretionary spending. This $1.1 trillion is what the arguments that hit the headlines are about year to year. More than half of that figure, about $600 billion, goes to the Pentagon. The rest is parceled out across the government, spent on education, housing, law enforcement, national parks, medical research, our embassies abroad, et cetera, et cetera. That's a limited fraction of the budget-- less than a third of the total-- spent on what we think the government does. The big-ticket items, besides the defense budget, reside instead in that mandatory spending category I mentioned. Social Security and Medicare benefits between them make up over 35% of total federal spending-- some $1.4 trillion in 2015. Unemployment compensation, food stamps, veterans' benefits, and a sliver of transportation infrastructure spending are also in this category. All of these programs are effectively automatically funded each year. The reason is when Congress created these programs, they did so based on the notion anyone who qualified would be entitled to the benefits they provide-- hence the term entitlement spending. If you are a certain age and met certain conditions over your working life, you will receive a check of Social Security benefits each month. The only way for Congress to change that is change the law that governs the formula for benefits by raising the retirement age or amending the way benefits rise with inflation.

The process is called reconciliation-- when the language of the law is reconciled with what legislators would like to spend. Let's go back to interest payments. You might have seen a similar line on your credit card bill because you didn't pay off your entire balance. The federal government probably brought in more than you last year, unless you made $3.25 trillion in fiscal year 2015. About half of that was from personal income taxes. This is a relatively recent development. There was a temporary income tax during the Civil War. The 16th amendment to the Constitution in 1913 made the wonderful number 1040 a permanent part of our April to-do list. Back in 1913, only about 1% of wage earners paid income tax. Now more than 100 million households file a return. Another third of federal revenue was from payroll taxes paid by workers and employers. These are mostly for Social Security and Medicare and appear as deductions on your pay stub. A little over 10% was from corporate income taxes-- the rest from excise taxes on gasoline or tobacco; from customs duties on imports; and from small random things, like national park entry fees or...the bobblehead dolls

(Describer) He holds a doll.

(Describer) He hands off one of Reagan.

Again all that added up to $3.25 trillion. But as you'll recall, government spending was closer to $3.7 trillion, leaving about a $440 billion gap. When spending is more than the amount brought in through taxes and fees, there's an annual deficit. Those deficits, when they accumulate year to year, add up to the national debt. This debt goes up. Only 5 years in the past 50 have seen a budget surplus instead of a deficit. The fiscal 2015 deficit figure was actually not that high in relative terms. It was only about 2.5% of the U.S. gross domestic product. Still the national debt passed $18 trillion in 2015. That money in $1 bills, put end-to-end, the line would go from Earth to the far reaches of the solar system, past the planet Uranus, heading for Neptune. Some long-term thinking is in order, but that is often in short supply. Changing laws, as we've seen, is hard, so lowering entitlement spending is hard. Passing a budget on time has been a rare achievement-- last time was nearly 20 years ago. Instead, Congress has resorted to a series of budget tricks-- imposing automatic cuts and putting them off or getting around them, creating huge omnibus bills called continuing resolutions that put off tough choices, even flirting with allowing the country to default on its debt. Of course, what this means is the lawmaking process accurately reflects American political truths. So the process succeeds, when it does, only through listening, deliberation, and a big dose of honest compromise. The story doesn't end once a law is passed. I can't think of singing cartoons about what happens after a bill becomes law, but auditions are open. After all, the process of policy implementation matters an awful lot to what happens on the ground after all that hard work on the Hill.

(Describer) Back at the fireplace...

Let's turn our attention to that next part. Thinking about how laws get implemented leads us away from the marble pillars and monumental statuary of the Washington tourist circuit and out to concrete office buildings and suburban strip malls across the country. It leads us deep into the executive branch, deep into the bureaucracy. You might want to hold on to those goggles. Accessibility provided by the U.S. Department of Education.

In this episode, Dr. Andrew Rudalevige details the process of lawmaking in the legislative branch of the U.S. government. Special attention is given to the use filibusters in Congress. Part of the "Founding Principles: American Governance in Theory and Action" series.