If you're the movie-watching type, you know that you get to enjoy great films the way they were meant to be enjoyed: on the big screen. Watching a movie in a theater allows you to enjoy technically illustrative audio and be mesmerized by bigger-than-life visuals. It allows you to fully empathize with the characters, lose yourself in the dialogue, and fully engage with and follow the plot. But what if you couldn't see? You couldn't be mesmerized by these visuals. You wouldn't be able to empathize with the characters as well if you couldn't decipher what they looked like, especially if a character has a particularly important feature used to identify and differentiate him/her from others. Could you differentiate between voices? Would you be able to follow the plot as well as if you had sight?

Every time people who are blind or visually impaired enter a movie theater with the hope of watching a movie alongside their sighted family and friends, so much information can be lost. Imagine everyone in the audience laughing during a moment in the film where there is little to no audio—everyone but you. Imagine you hear your friend or family member whisper, "Wow," and you don't know why. What an isolating experience!

But with technological information exponentially growing and creating new ways to meet and exceed our needs, there is a way to alleviate this type of isolation: described movies.

Description is the verbal depiction of key visual elements that are inserted into natural pauses in the movie's soundtrack. Since the setting, action, clothing, gestures, scene changes, body language, facial expressions, and other visual components would not be discernable to anyone listening to the production's audio source alone, description helps movie viewers follow visual cues.

The person who performs the description is called a voicer (or sometimes a voice talent or narrator). The describer is the person responsible for authoring and editing the description script to be recorded by the voicer. Describers will initially listen to the film without watching it in order to approximate the experience of a person who has limited or no vision. They pay close attention to what is already communicated by the soundtrack. They use specially designed computer software to map out the pauses in the movie, and then they craft the most expressive and effective description possible in the space available. After a script is written, it is edited and rechecked several times. The script is checked for timing, continuity, accuracy, and a natural flow. Professional voicers will then read the script while watching and listening to the program, and that audio track is then provided to accessibility-equipped theaters on a disk that synchronizes with the movie's soundtrack as it plays.

Each earpiece had its own volume control.

Description at cinemas dates back more than a decade, to November 14, 1997 at the General Cinema Sherman Oaks Theater in Sherman Oaks, CA. Blind and/or deaf visitors could see The Jackal, as it was the first movie ever to be equipped with DVS. There are over 450 theaters nationwide that are considered to be accessible.

Examples of different equipment include:

DVS Theatrical®, developed by The Media Access Group at Boston public broadcaster WGBH, makes theaters accessible to audience members with visual impairments the same day films debut and during subsequent showtimes. WGBH's Media Access Group's MoPix is utilized in theaters to provide patrons who request description to enjoy the film along with sighted members of the audience.

DVS Theatrical allows theaters to provide description without broadcasting it to the entire audience and without the need for special prints, showtimes, or awkward equipment.

The description is fed via infrared or FM transmitter to a small portable receiver, enabling users to hear the description on their headsets from anywhere in the theater—privately.

Note: This system is currently available in select theaters in the U.K.

When screening Dolby® Digital 35 mm films, the Dolby ScreenTalk™ system superimposes subtitles over the projected image using a video projector or displays the text via an alternative subtitling device. There is no need for special prints; the film distributor simply provides the cinema, either electronically or via CD-ROM, a computer file containing the subtitling and audio description information for a particular release.

For audience members with disabilities, the system interfaces with the cinema's wireless headphone installation to transmit audio commentary directly to visually impaired patrons. Subtitles for the hearing impaired can be projected simultaneously, using a different color for each character's dialogue to provide a more satisfying cinema experience.

Providing access for blind moviegoers, the audio description is received on infrared headphones and does not disturb other patrons. Blind patrons using these headphones hear all the dialogue and effects, as well as a vocal narration in between describing the scene and the action. Characters are described, visual jokes explained, and people's body language are all outlined in the narrative.

If you're a theater owner, costs vary from theater to theater depending on factors like theater size and existing equipment. The cost of adding description may be $5,000–$6000 or more.

If you're a consumer wanting to view a movie and you've found a theater that offers the accessibility feature of description, it's free! Depending on your local theater's policies, a small (refundable) monetary deposit may be required to borrow the wireless receiver that you'll need to access the description.

If you are a producer and want your film described, prices for description of films vary by studio, length of film, turnaround time, and other related factors. But because the description is not on the film itself, there is no need to create special prints. Don't forget that once the description has been created, it can be incorporated into other formats, such as DVD, Blu-ray disc, and streaming video (or audio).

WGBH's Media Access Group provides theater locations and accessible movie listings (those currently available in theaters as well as upcoming releases) in the U.S. and Canada. Specific showtimes and movie schedules can be obtained directly from theaters equipped with MoPix Technology or from Caption Fish, which also provides information on captioned movies in your area. (Note: To find described movies on Caption Fish, use the search filter marked "DVS.") Additionally, the Media Access Group typically announces new releases via its Facebook page and from the Twitter account @accessWGBH while also providing frequent updates via its Mopix newsletter.

Not all new releases come out with description, and those that do often don't have it as an accessibility feature on the VHS, DVD, or Blu-ray disc, for example. The Media Access Group, however, partnered with both Sony Pictures (read about the partnership with Sony) and Universal Studios (read about the partnership with Universal) in 2009 to greatly expand the number of titles that are available with description upon their release on DVD/Blu-ray, and they provide a list of these (and other) home releases at http://describedmovies.org (a similar listing is available from the American Council of the Blind's Audio Description Project website).

For more information on how to advocate for description in movie theaters, check out the following links:

Description is a fairly new accessibility feature, and thanks to the ever-growing field of technology, it's constantly progressing. As of this writing, chains that have at least some accessible theaters are AMC, CEC, Consolidated, Douglas, Carmike, Gateway, Clearview, Muvico, National Amusements, and Loews Cineplex. 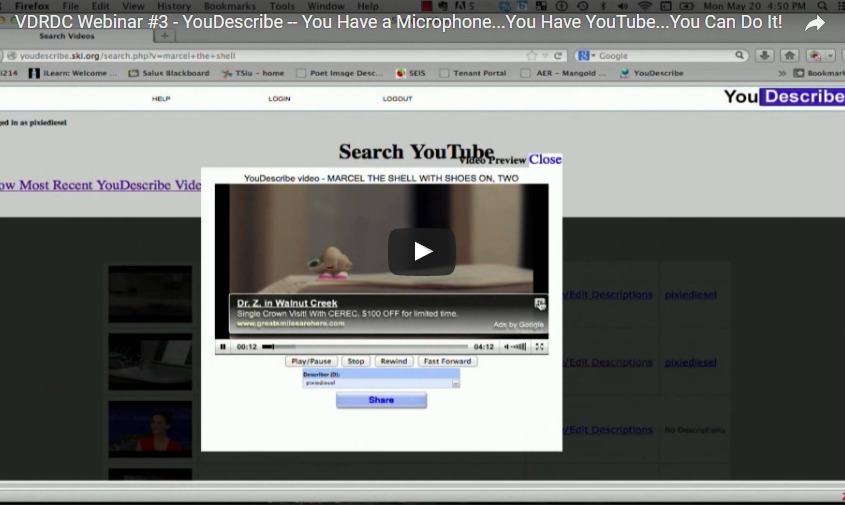 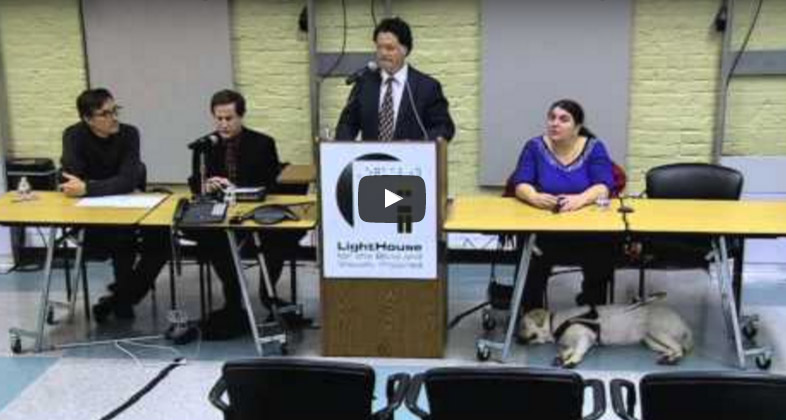