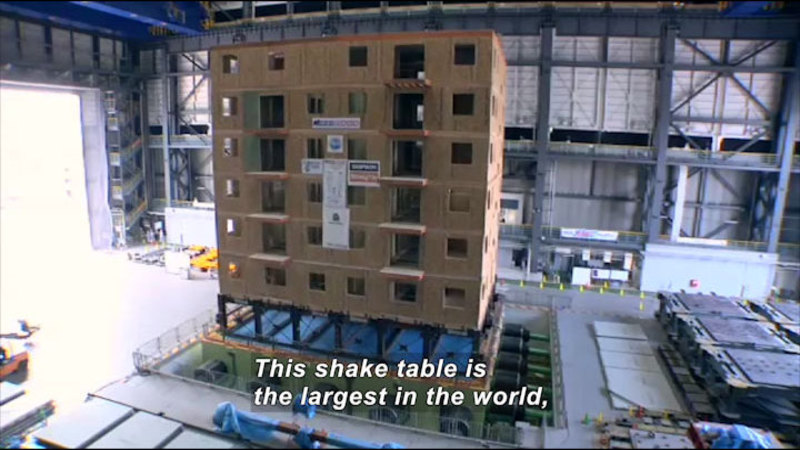 (Describer) Streams of light collide to create a globe filled with water. Title: Science Nation. A six-story building is shaken on a platform.

(male narrator) It swayed, but it didn't fall. Perched atop the largest shake table in the world and subjected to a massive simulated earthquake, the six-story wood-framed condominium stood tall. The success of the test may lead to safer, taller wood-frame building construction in earthquake zones.

(male) The earthquake being simulated here

is an earthquake that would occur, on average, only once every 2,500 years. It's a very strong earthquake. Much stronger than we currently design for in the U.S.

(Describer) A man hammers around the platform's frame.

(narrator) Colorado State engineer John van de Lindt leads a team that's developing new ways to build mid-rise wood-frame buildings that can stand up to earthquakes. In many earthquake-prone areas of the U.S., wood-frame buildings taller than 3 stories are uncommon. And building codes generally limit such construction to just 4 stories. Van de Lindt hopes validation of the new design techniques could safely push building codes to 6 stories or taller. The detailing that we've incorporated into the structure

is not difficult, is not expensive. It's just an engineered system. We can put this into all of our structures built in high-seismic regions and expect them to perform well in earthquakes, and that, indeed, lives can be saved.

(narrator) To test their new design, van de Lindt turned to E-Defense, a remote shake table facility in Miki City, Japan. It was the finale in a series of tests on wood structures funded by the National Science Foundation's Network for Earthquake Engineering Simulation. This shake table is the largest in the world, and it's triaxial, meaning movement in three directions at once. That's key for simulating an earthquake as realistically as possible.

(narrator translating) When testing, it can be felt in the surrounding area. They built it where there are no people around. It is isolated. They actually flattened a mountaintop, dug a crater, and put 22-foot-thick concrete around it to try to limit the effect on the surroundings. The building is outfitted with over 300 sensors that provide researchers with exhaustive data on how it holds up to seismic forces. One major design innovation is a backbone of steel rods called an Anchor Tie-down System.

The steel rod behind me provides the overturning restraint for the entire building. It goes up story to story, effectively making a continuous steel rod from the first level to the roof. You can see strain gauges.

We're measuring--by getting the strain in the steel, we know how much it's elongated. What this does is this system prevents the overturning of the entire building.

(Describer) A screw is drilled into a floor.

(narrator) Another innovation they are testing is called performance-based seismic design, a nail-pattern technique that distributes stiffness throughout the construction and makes it stronger.

(Describer) Construction is shown in fast-motion.

(narrator) Just getting the building materials to Japan and erecting the condo was a huge logistical challenge. As always, the devil is in the details.

(van de Lindt) There were also smaller challenges, like language barriers with the carpenters, going both directions, trying to explain differences in construction methods to them.

(narrator) At last, came the moment of truth-- the simulated 7.5 magnitude earthquake.

(Describer) As the building is shaken, a table with dishes falls over inside.

The test was payoff for years of work for van de Lindt.

(van de Lindt) What we learned is that a six story light-frame wood building designed with performance-based seismic design, you can use that philosophy to design a six-story structure. Honestly, looking at that, we could do an eight-story.

(narrator) Post-shake inspections confirm there was no significant structural damage to the building.

(Describer) Van de Lindt and other spectators cheer and clap.

(narrator) Its success may pave the way for a new era in wood-frame construction in earthquake zones.

In Miki, Japan, a six-story wooden model condominium was shaken by the equivalent of a 7.5 magnitude earthquake. The test was said to be the largest simulated earthquake ever attempted with a wooden structure. The full-scale building sat on a metal shake table that rocked it violently back and forth. The table, designed to hold up to 2.5 million pounds, reproduced forces based on those recorded during the 1994 earthquake in Northridge, California. But, it was scaled up by 180 percent to simulate an earthquake so violent it would only occur an average of once every 2,500 years. Part of the "Science Nation" series.