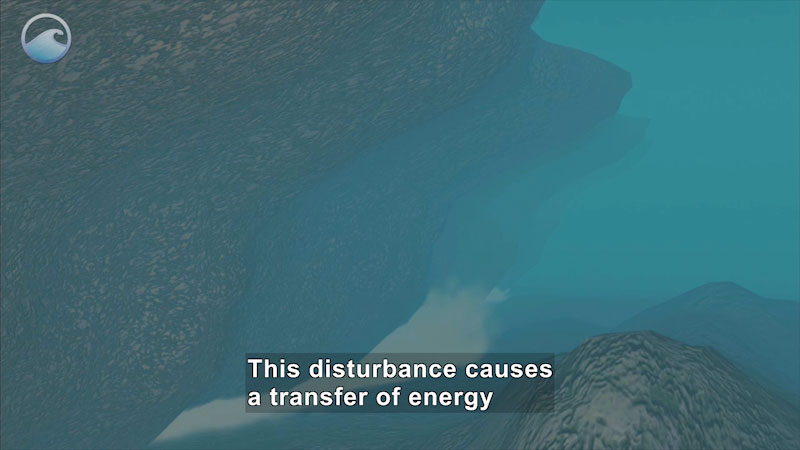 (Describer) In computer animation, part of the floor breaks and rises.

This disturbance causes a transfer of energy from the seafloor to the ocean, generating a series of ocean waves known as a tsunami.

(Describer) A long swell moves and gets bigger.

In about 20 minutes, waves strike the Japanese coastline. Other nations go on high alert because the tsunami was propagate, or spread, throughout the Pacific Ocean.

As the tsunami radiates outward from Japan, it encounters a variety of ocean features, such as ridges and underwater volcanoes, which guide the tsunami and create a complex pattern of scattering and reflective waves. In eight hours, the waves reach the Hawaiian islands, and in nine and a half hours, the West Coast of the United States. In 16 hours, the tsunami reaches the Indian Ocean and New Zealand, and by 22 hours, the entire Pacific Ocean had been affected. The impact of a tsunami can be highly variable because of the complicated interactions with ocean features and coastline elements. Wave height and speed will differ from place to place. Since tsunamis can be hundreds of miles long, and travel thousands of miles from where they originated, they are considered a worldwide threat when they form.

A 9.0 magnitude earthquake rocks the ocean floor about eighty miles off the coast of Japan. This disturbance causes a transfer of energy from the seafloor to the ocean, which generated a series of ocean waves known as a tsunami. Within 20 minutes, the waves struck the Japanese coastline, and other nations go on high alert as the tsunami spreads throughout the Pacific Ocean. Part of the "Danger Zone" series.

Danger Zone: Break the Grip of the Rip

Danger Zone: The Making of a Super Storm

Danger Zone: Fuel for the Storm