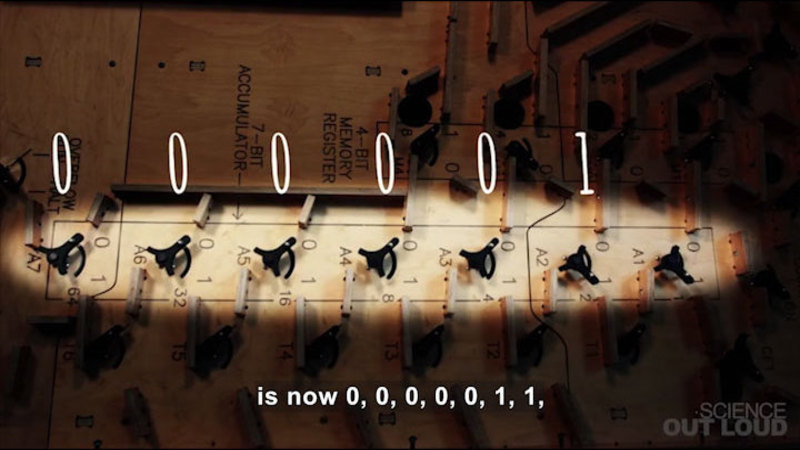 (Describer) Title: Science Out Loud. Outside a building, the letters M-I-T have mirrored surfaces.

Although we think of computers as super-complicated, high-tech machines with tiny parts, they can also be huge, wooden, and mechanical, like this computer here. Even though they look different, they're both made of the same basic part--a switch. One switch doesn't seem interesting. It's either off or on. But if we arrange switches in a specific pattern, we can do math or logic. For instance, this circuit turns on the light if both switches are turned on.

(Describer) A plus B.

But this circuit turns on the light if either or both switches are turned on.

If we connect more switches, we can do more complex math and logic. Fundamentally, a computer is a carefully constructed arrangement of switches.

A light switch has a mechanical input and an electrical output. Because the input and output types are different, we can't connect the output of one to the input of another.

To make more complicated circuits, we need a switch with identical input and output types so that we string several switches together.

(Describer) On the big computer...

Our Digi-Comp has switches with a mechanical input and mechanical output.

Like the light switch, these switches have two states-- either left and right, off and on, or 0 and 1. What's cool here is, instead of programming this computer by writing code, we program it by physically setting the position of several different switches.

(Describer) ...which are small black lever between ramps.

I'll set this computer to count the number of balls here by setting the count switch to on. The sum is given by these switches here. We'll set the sum to 0 before we start counting. Let's start counting by pressing this lever.

(Describer) A pool ball rolls down like in a plinko machine, moving along different ramps and switches. It moves the position of one switch and then rolls between ramps down one side of the wooden board.

(Describer) It rolls to a stop at the bottom.

(Describer) He sets another ball rolling from the top.

(Describer) It turns one switch, then another, then continues to the bottom.

So what happened this time? I'll reset the sum back to 1.

(Describer) He send a third pool ball down.

(Describer) It moves another switch from 0 to 1 and goes on to the bottom.

But modern computer chips have over a billion switches. They're made from wafers like this one, where each square represents a chip. They're made from semiconductor switches called transistors, which are solid state, meaning they have no moving parts. This allows engineers like me to make them smaller, faster, and more energy efficient. We can make them over a billion times faster than the Digi-Comp. These semiconductor switches make modern electronics possible.

(Describer) Title: Made with love at MIT. Accessibility provided by the U.S. Department of Education.

Most computers are super high-tech machines with tiny parts, but they can also be huge, wooden, and mechanical. It's what they have in common that makes them computers. Part of the "Science Out Loud" series.