A Tale of a Troll and His Captioned Media

[Editor's note: This article was originally written in 2005 and has since been archived. Some content may be outdated.]

Once upon a time, in a land not too faraway, sat a modest cottage where a modest creature named Mr. Bridgewater lived. 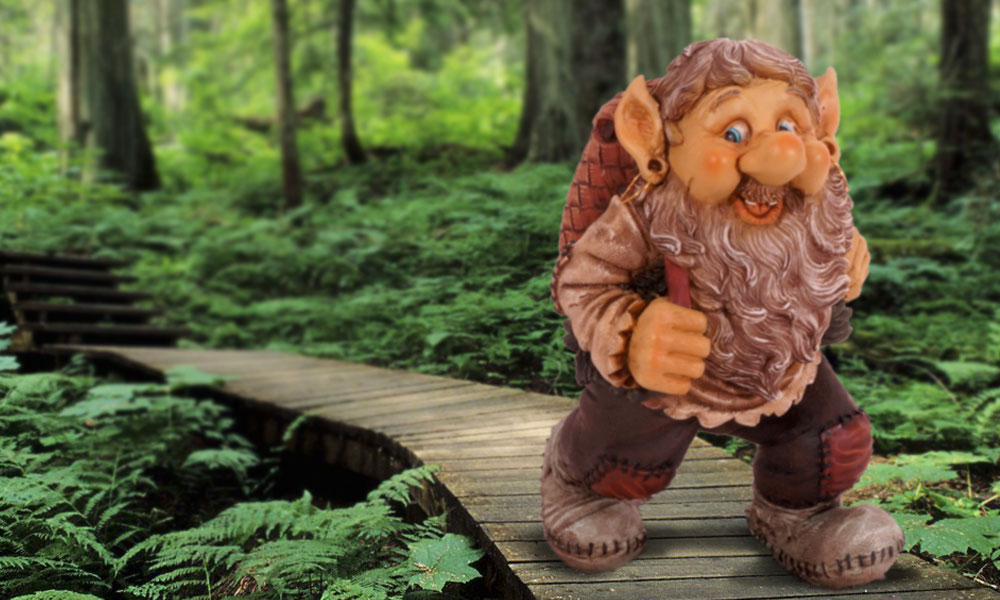 "Yes," he nodded, and with his fingers told her that this was a package from the Described and Captioned Media Program (DCMP).

"They offer," he signed, "a free-loan program of open-captioned videos to all who are deaf or hard of hearing. I ordered The Jabberwocky, Treasure Island, Rikki Tikki Tavi, and one you might be interested in called The Boy and the Snow Goose."

"Oh, that's wonderful!" she responded, making gestures in the air with her hands. "I'll be sure to spread the word as I go on my morning route." Then she signed "good-bye," hopped on her goose, and swooped up into the clouds.

Mr. Bridgewater took his package inside and then text-messaged his friends Goldilocks, the Wicked Witch of the Southwest (she wasn't really wicked, but suffered from eczema which made her very irritable), and Jack. He wanted them to know he had a special surprise, that they should come over right away.

They all responded that they would be over in no time, so Mr. Bridgewater went to preparing snacks and unpacking the brown box. In it he found black cassette boxes with the names of each video on the outside of each box: Danny and the Dinosaur, Five Creatures, Summer of the Monkeys, Pete's a Pizza, and many more.

"I've been waiting for so long to see the tales of Hans Christian Anderson," he thought. "Why, here's The Ugly Duckling, The Red Shoes, and The Emperor's New Clothes. And I also have Black Beauty by Anna Sewell and The Giving Tree by Shel Silverstein."

He was not only happy about being able to watch these programs and understand them, but also because they were free and he could order as many as he wanted at one time.

As he sat thinking, the little yellow light above the door started blinking, indicating he had a visitor.

"That was fast," he thought. But when he opened the door, it wasn't Goldilocks or the witch or Jack. It was an old woman who began telling him with her hands that she was terribly sorry to bother him, but Mother Goose had let her know that he had found some captioned movies, and sorry, she knew it was terribly rude, but would he mind terribly if she joined him? She would terribly appreciate it.

He told her that would be fine and asked if they had met before as she looked very familiar.

No, she was quite certain they had not, and he could just call her Old Lady, and how it was terribly nice to meet him. He signed "likewise," and invited her in.

Abruptly the yellow light started blinking again. He opened the door, and before him stood a wolf in a pink nightgown and a pink headdress covering pink rollers.

"Hey," he said, staring past Mr. Bridgewater into his house, "did an old lady just come in here?"

Mr. Bridgewater motioned that he was deaf and the wolf would have to sign.

"Oh, sorry," signed the wolf. "I think my grandmother just came in here. I want to have her for dinner, I mean, I want to invite her over for dinner. Heh heh." Then he rubbed his paws together and peeked again at the old woman.

"Hey, you're not the grandmother I'm after, I mean, my grandmother," he signed, pushing his way past Mr. Bridgewater.

"No, you got me," she responded. "I've been trying to live in hiding since my life story, There Was an Old Lady Who Swallowed a Fly, was produced. It's been terribly hard. All the paparazzi, fans wanting autographs . . . Although the documentary ended with my death, it was feigned. The rumors of my death are terribly unfounded . . . as you can see."

"I knew I recognized you!" signed Mr. Bridgewater.

"No autographs, please . . ." she signed and turned away, not seeing the wolf as he rolled his eyes.

Mr. Bridgewater shrugged and suggested they help him unpack the box.

"Excellent!" fingerspelled the wolf as he held up the videos for Max's Christmas and Max's Chocolate Chicken.

The yellow light started blinking again, and without waiting for a response, in bounded Goldilocks, the Wicked Witch of the Southwest, and Jack. Goldilocks and Jack were startled to see the bed-ready wolf, but relaxed when the witch signed she'd turn him into a winter coat if he tried anything. She turned her steely eyes to the wolf and he responded by sulking in Mr. Bridgewater's E-Z Boy, his hands firmly grasping the two videos.

As they all sat around the living room enjoying Aesop's Fables and eating their snacks (Goldilocks stuck to her porridge), the wolf, whose fur was smarting from all those pink rollers, became restless.

"What if we don't get the videos back in time and they charge us a late fee?" he exclaimed.

The witch walloped him over the head with her broom and told him to stop his yakking.

"You see," she explained, "this is a free-loan program, and although we must be careful to get these back on time, there is no charge if we don't."

The wolf seemed a little relieved when she said this, and went back to noisily slurping his whey up through a straw, much to the chagrin of his hearing friends.

Just then there was a knock on the door and the little yellow light above it started flashing.

There at the door stood the largest dragon they had ever seen. She began to sign.

"Hey! I understand there is a party going on in here and you guys are watching videos from the DCMP. Mind if I join you?" A breath of hot air filled up the room as she grinned at them, flashing her teeth.

Mr. Bridgewater motioned that she was to come inside, at least as far as her neck would allow her. He then signed that they were watching Aesop's Tales, but would be putting in Peter Rabbit ("Mmmmm . . . rabbit," signed the wolf.) after it was over and asked her if she wanted any snacks. This he wanted to get quite clear, so he watched her claws carefully as she signed back. Luckily for them, she was only interested in ice cream and a tub of cool water.

They watched the videos into the wee hours of the night and slowly, one by one, they all fell asleep.

The next morning, they discovered something "terribly terrible!" All the videos were gone and the only clues were giant footprints on both sides of the cottage--and the fact the roof was missing.

Jack knew immediately who took the videos. "To the beanstalk!" he signed with gusto.

They raced with him up the beanstalk and into an enormous castle to find the giant watching the DCMP videos on a little 13-inch TV/VCR combo.

"Fee-Fie-Fo-Fum—ah, forget it," he signed, with a brush of his hand. He turned instead to the little darkhaired giant on his knee all dressed in pink, her big eyes riveted to the tiny little screen. On it was showing Ramona: Squeakerfoot.

"I'll squish you like bugs if you try to take these videos away from my daughter," he signed emphatically. "She hasn't been able to understand the broadcast cartoons since closed captions are not required on smaller sets, and I knew you had some open-captioned videos. And I'm not giving them back!"

"You do know you can get your own?" Goldilocks asked with her hands.

"Yeah," signed Mr. Bridgewater, "just contact the Described and Captioned Media Program and sign up with them. It's absolutely free. You won't even have to pay for a stamp."

"I thought you had to be deaf to register," he responded. "I'm not deaf."

"But your little girl is," signed the dragon, who didn't look quite as big anymore. "Anyone with a deaf family member or anyone who works with those who are deaf and hard of hearing qualify for the program."

"Oh, well I guess I can do that," he nodded. "Do you know if they stream over the Internet? My computer monitor is much bigger than this TV."

"Yes, they do," signed Mr. Bridgewater. "Some of the titles that I didn't order which are available both streamed and on video include Long John Silver, Angus and the Ducks, Amazing Grace, Honk!, The Teacher from the Black Lagoon, and Miss Nelson has a Field Day—just to name a few."

"Well, this is definitely good to know. You can have your videos back, but would you mind if we held on to Ramona: Rainy Sunday and Ramona: The Patient just for a little while? So she can finish watching them?" asked the giant.

"Sure, and could you do me a favor?" asked Mr. Bridgewater. "Fix my roof?"

Later that night, Mr. Bridgewater settled into his favorite chair to enjoy A Kid for Two Farthings, a goat tale (old habits die hard). He was glad to have shared knowledge of the DCMP with so many creatures, and was content in the fact that they would all live happily ever after. (Except for the old lady. She realized how much she missed fame and fortune and decided to star in her own reality show called There Was an Old Lady Who Lived in a Shoe.)