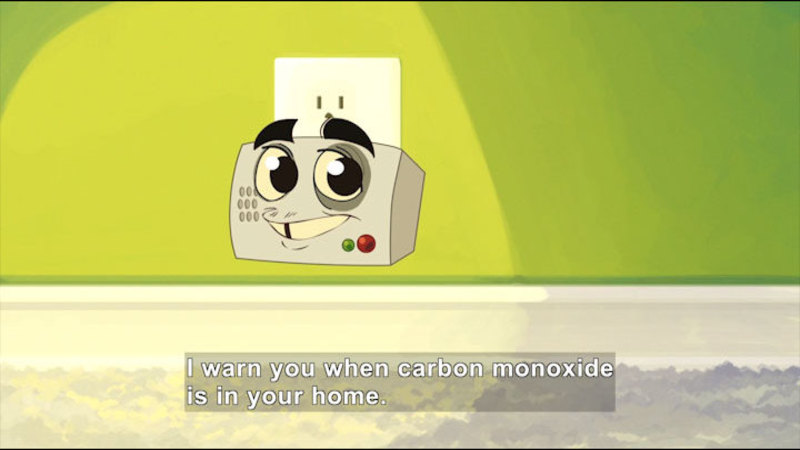 (Describer) The word “fire” is on fire, but it's put out by a wave. A boy and girl sit on the front bumper of a fire truck.

Hi everyone. My name's Jackson. And my name is Audrey. Today we're gonna learn about fire safety.

Did someone say fire safety? Hey, who are you? I'm Frankie, your local fire hall. Will you teach us about fire safety? You bet. I have some friends to help. Ready to start?

(Both) For sure. First a riddle. The most important thing to keep you safe is the most quiet. It's round, white, and beeps when there's smoke. What is it?

Ooh, I know. It's a smoke alarm. That's right, kids. Come with us. My friend, Alerta the smoke alarm, will teach us everything.

(Describer) Next to a house...

Hi, my name is Alerta. I'm a smoke alarm. I warn you when there is smoke. I let off a loud [beeping] and shout at the top of my lungs. When you hear me, you know there is smoke. Where there's smoke, there could be fire. Have at least one smoke alarm on every floor. Ask your parents to test your alarms once a month. When you test me, I will beep loudly. You'll know I still work. You should change my battery every year.

(Describer) A battery pops out of her back and another pops in.

Once I'm ten years old, get a new smoke alarm.

(Describer) At the truck...

We have to check our alarm every month and change our battery every year. Get a new one every ten years. And when there's smoke, there might be fire.

(Describer) Jackson and Audrey walk on the fire truck, looking around.

(Describer) Audrey goes down a step.

Are you invisible? You got it. Like the invisible gas, carbon monoxide. Hey, I've heard of that. Carbon monoxide is invisible. You can't see, smell, or taste it. It's dangerous. How can we keep safe from carbon monoxide? I've got a friend to help us.

(Describer) Plugged into a wall...

Hiya kids, my name is Carlos. Can you guess what I am?

When you hear this noise, don't look around for anything. Just get out! Remember to replace me every five to seven years.

(Describer) At the truck...

(Describer) At the bottom of a fire pole...

Whoo! That was fun. I want one of these.

(Describer) They walk from it.

Firefighters have many ways to get around. If there's a fire in your home, have an escape plan. Escape plans tell how to get out safely. Practice so everyone knows it. In my new house, our family drew a map of our escape plan.

(Describer) She unrolls some paper.

You should too. Let's take a look.

(Audrey) Have two exits just in case fire blocks one.

(Jackson) Have your meeting place in front, where fire trucks will come.

(Describer) Lines are drawn to a meeting place.

Don't use an elevator. Firefighters use them in emergencies.

(Audrey) Use the stairs. Feel the door first. If it's hot, there's fire behind it. Find a safer way. I feel safer with an escape plan.

(Describer) Jackson and Audrey crawl on a mat, using their elbows and knees. Frankie appears.

Hey, what are you guys doing?

(Describer) They sit up.

We're practicing. What for? When there's fire, there's smoke. Smoke rises. You can't breathe smoke. So it's best to:

(Audrey) Though fires are scary, don't hide, get outside.

(Audrey) Never enter a burning house even if you left something. Wait outside until the fire department arrives. Firefighters will make sure everyone is out and you are safe. That's lots to remember. Let's see if we've got it.

♪ Don't stop to pick up any toys, ♪

♪ Fire can be scary, but don't hide. ♪

What's that for, Audrey?

(Jackson) If a fire starts, use your escape plan to get out. At your meeting place, call 9-1-1.

(Audrey) If you're without a phone, go to your neighbor's and dial 9-1-1 from there.

(Describer) In a kitchen...

Hey, Audrey, what are you doing? There are matches here. I don't know what to do with them.

(Describer) They're on a table. A cartoon match pops out.

Who are you? I'm Milo, the match. I heard you talking. I want to help. Matches should never lie around. We're dangerous if used improperly. Fires can start accidentally by playing with them. Could you teach us? Alright, brace yourselves. Lighters and matches are adult tools and should be locked away high and out of reach. Thanks, Milo. If we shouldn't play with matches, we shouldn't be playing with you.

(Describer) Milo laughs, and then frowns.

(Describer) Walking along the truck, Jackson and Audrey find the mat.

(Describer) They hop in place.

Next, you drop to the ground.

(Describer) They get on their knees, then their elbows.

Use your hands to protect your face from the fire.

(Describer) They cover their faces.

Roll back and forth until the fire is out.

Fire likes air. Without air, there's no fire. Good job! Rolling smothers the fire and puts it out. Remember, if anything on you catches on fire, don't run.

(Describer) A sign on the back of a fire truck says “keep back 150 meters”. A door has the numbers 9-1-1. Jackson and Audrey walk by racks where firefighters' jackets are hung.

♪ It's good to know about fire safety ♪

When you're near fire or hot things, you can get burned. It's important to know how to cool a burn.

(Jackson) You can get burned from anything hot, even hot chocolate, so be careful.

(Audrey) If you get burned, run it under cold water. So remember...

♪ It's good to learn cool water is the best ♪

(Describer) A man stands next to a red car.

(both) Hi, firefighter Chris. Firefighters can look scary with our gear on. But gear protects us from fire and smoke.

(Describer) Someone in full gear walks in.

(female) We're here to keep you and your family safe if there is a fire.

(Describer) Wearing gloves, she takes off her helmet, then the hood over her head.

(Describer) She takes off her visor and air mask and smiles.

Remember, kids, firefighters are you friends.

(Describer) She steps over to Jackson and Audrey and high-fives them. Chris waves with them.

♪ They may look scary in their gear ♪

♪ But they're here to help so have no fear ♪

♪ Firefighters are your friends ♪

♪ Your trust in them you can depend ♪

(Describer) A toaster, iron, heaters and lighters are on the kitchen table.

What's all this? Maybe he wants to sell stuff. No way. It's for a riddle. These things have something in common with a stove. They're all in our homes. And they all get hot.

(Frankie) Anything hot is a possible fire hazard. Some things could catch fire if put near something hot.

(Audrey) Keep things that burn away from hot things.

(Frankie) A great rule! Kids, remind adults to blow out candles when leaving the room.

(Jackson) Remind adults to unplug electrical items like kettles and hair dryers when not used.

(Audrey) Also, remind adults to stay in the kitchen while cooking. Lets' try to remember...

♪ Keep your eye on ♪

♪ objects that get hot ♪

(Describer) By the truck with Chris and other firefighters...

I hope you learned a lot. In a fire, I'll know what to do. You know to be careful and keep fire from happening. In a fire, we will help. See if we remember what we learned. Thanks for joining us.

(Describer) Jackson and Audrey practice crawling on the mat, and outside, the firefighters turn on a hydrant and fill a fire hose.

♪ It's good to know about fire safety ♪

Frankie the Fire Hall teaches students about fire safety. He provides tips on how to stay safe at home as well as provides fire prevention advice. 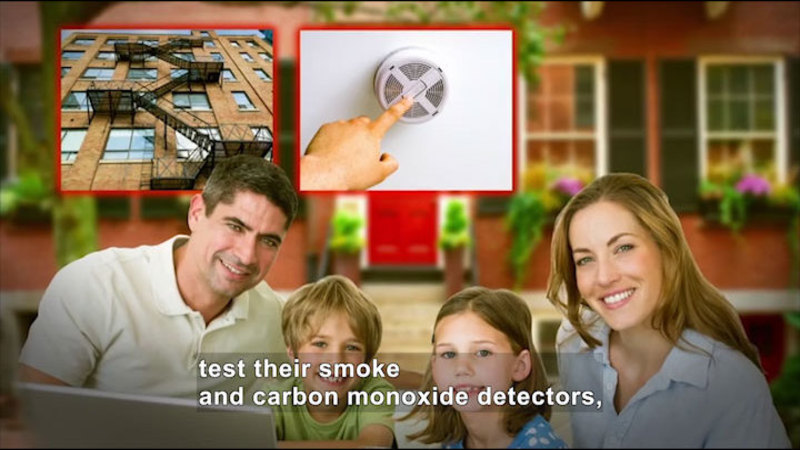 All About the Holidays: National Fire Prevention Week 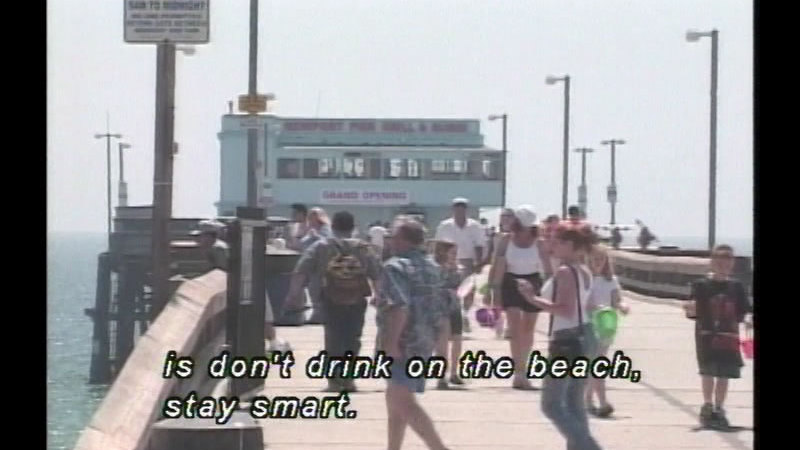 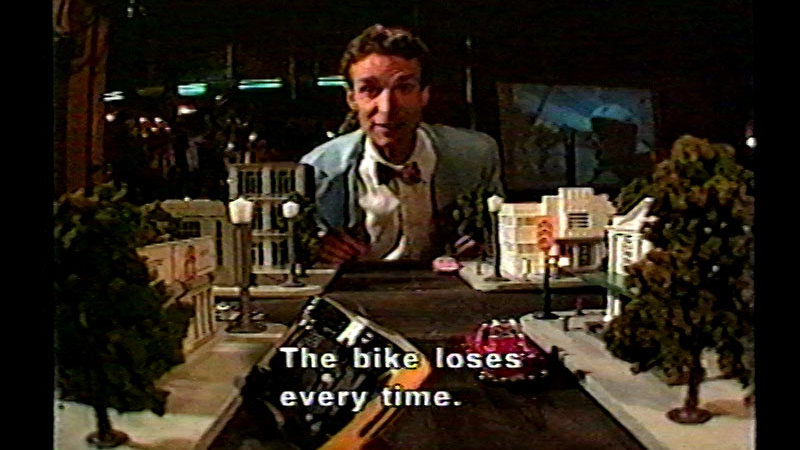 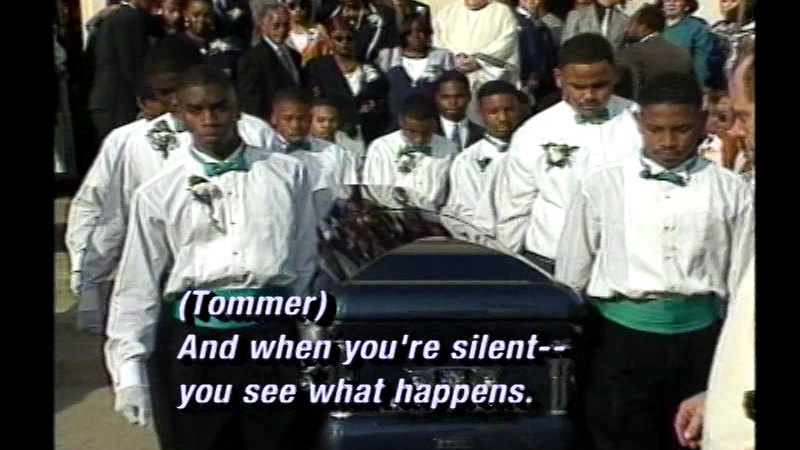 Break The Code Of Silence: Save A Life! 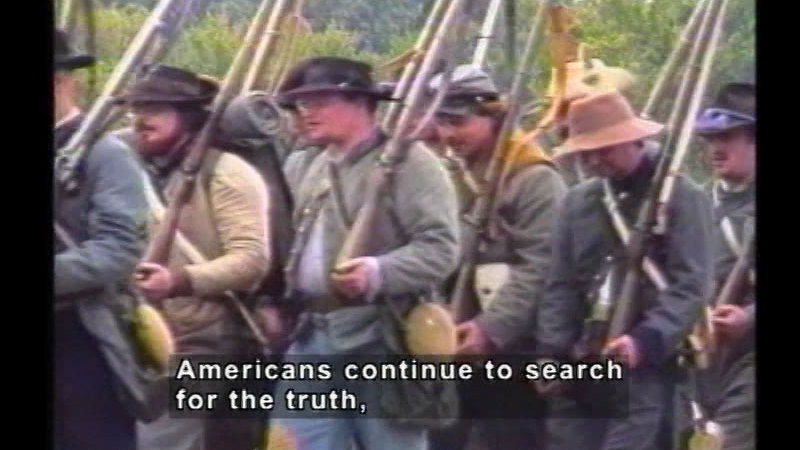 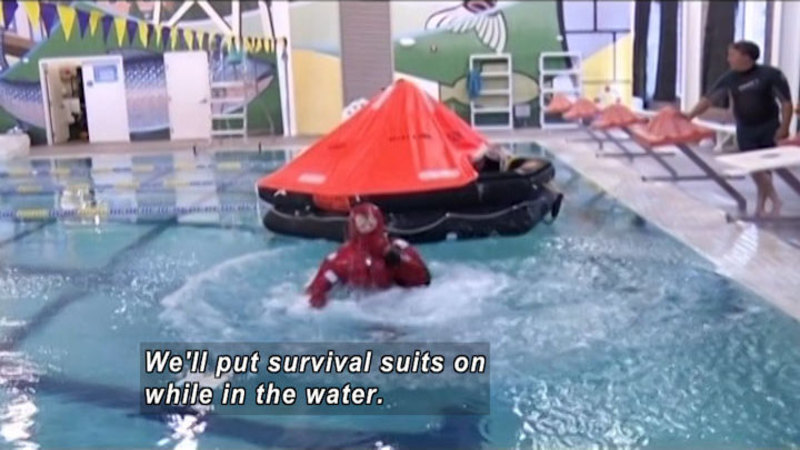 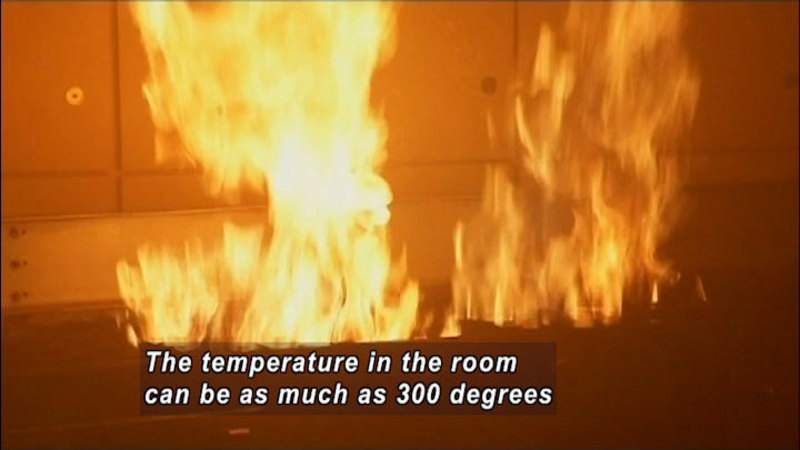 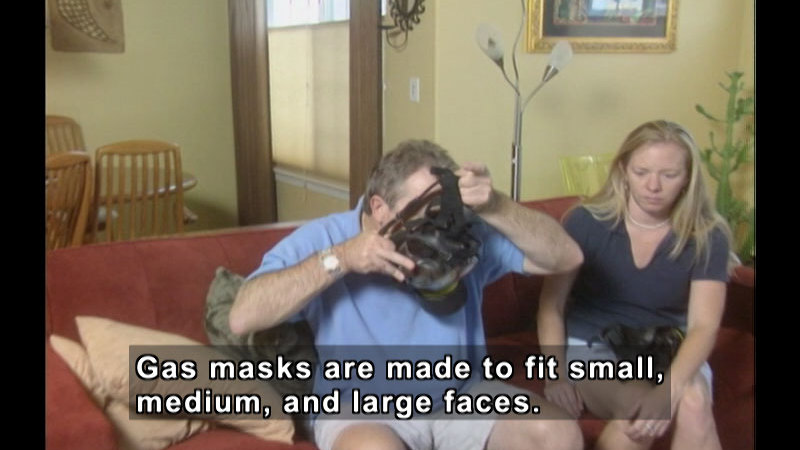 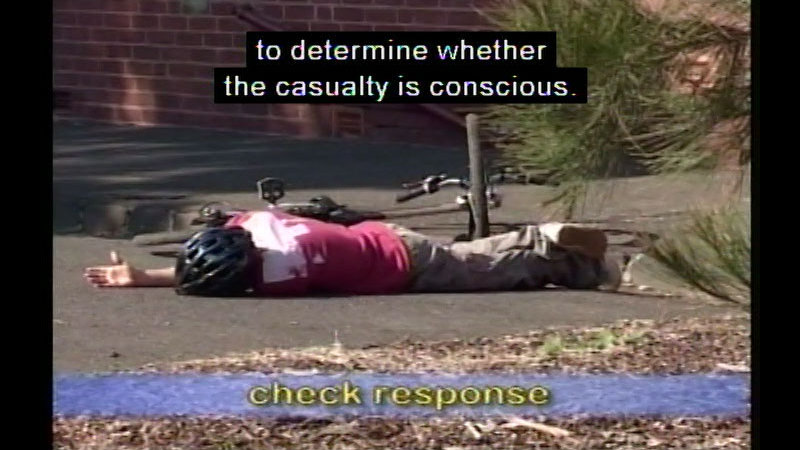 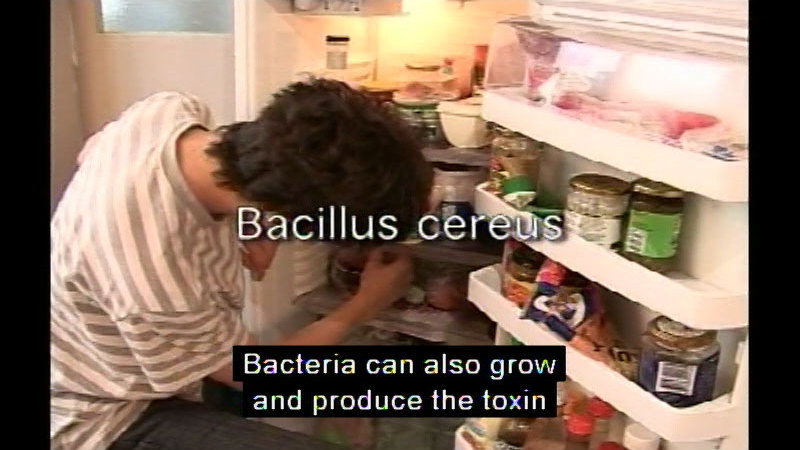