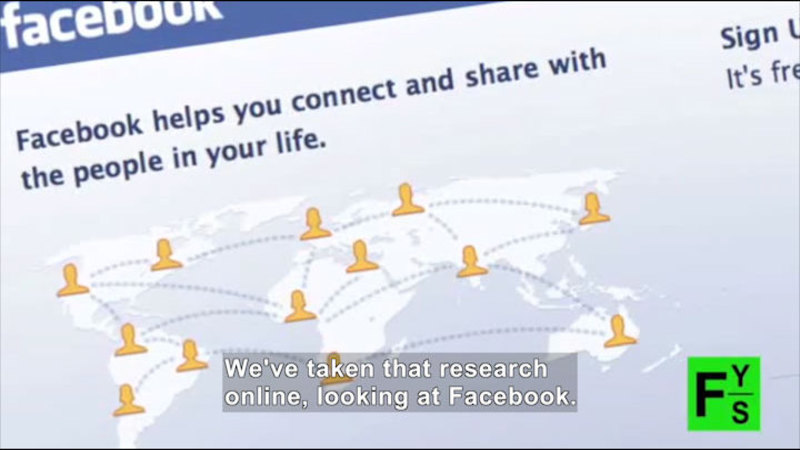 (Describer) A transparency is placed on an overhead projector. Beside a letter F with a Y over an S, title: Finding Your Science.

where we have all these online sources of data now, just hundreds of millions of observations of human behavior every day on Facebook, on MySpace. And developing the methods to really understand those complex interconnections is what keeps me up at night.

(Describer) Titles: James Fowler is a political scientist at the University of California, San Diego. He studies how social networks influence our behavior.

Nicolas Christakis and I study social networks, and we've spent time studying real-world social networks. These people say who their friends are in reality, and we've studied things that spread between them from person to person to person. We've taken that research online, looking at Facebook. We've found that smiling profile pictures tend to cluster. If your friend has a smiling profile picture, chances are so do you, and that's not all. If your friend's friend has a smiling profile picture, then you're more likely to have one. We call this the three degrees of separation rule. Repeated studies show that we're influenced by our friends, our friends' friends, even our friends' friends' friends, but no further. And one interesting thing about that is that's a sociological phenomenon, where we're studying things that spread from person to person, like obesity, smoking, and drinking behavior, or happiness, loneliness, and depression. But we think this is about how we became human in the first place. There's this anthropologist named Robin Dunbar, who has studied ancient human groups, finding that those groups tend to have a size of about 150. What's interesting is that we tend to have about five or six close friends, we have about 25 to 36 friends of friends. We have about 150 friends of friends of friends. In early human groups, we wouldn't have been connected to others by more than three degrees of separation. We're exploring this rule's biological basis. Maybe we evolved to influence and be influenced by people at no further than three degrees of separation from us.