Science Nation: The Secret of a Snake's Slither 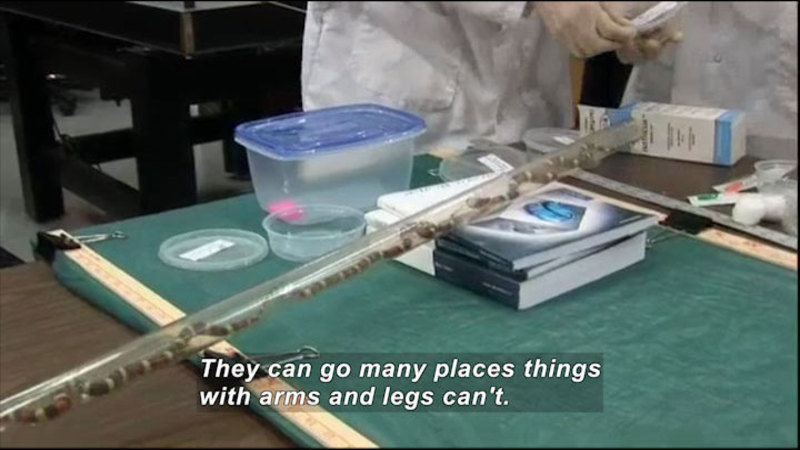 (male) Having no arms or legs seems like the worst body plan. These snakes use it to their great advantage. They can go many places things with arms and legs can't.

It's amazing how versatile this long string-like body is.

(male narrator) Professor David Hu studies how snakes and other animals move. He's a mathematician and a mechanical engineer.

(Hu) There's much interest in animal locomotion-- what can we learn from how animals walk, swim, fly? Their interactions with their surroundings, for example fluids and the solids around them, is very complicated. It's complex, so mathematics plays a large role in understanding how they move.

(narrator) Hu's National Science Foundation study uses math to determine how snakes slither. They move in a much different way than scientists have long thought.

(Hu) People think that snakes keep their bodies flat against the ground when moving. Actually, they lift parts of their bodies to increase their speed and efficiency.

(narrator) Hu demonstrated a few experiments for us. Using highly concentrated gelatin and polarizing light, it's possible to see where the snake is pushing down and what parts of its body are lifted. By concentrating its weight, the snake optimizes where it intersects with the ground.

(narrator) Graduate student Jasmine Nirody learned to like snakes, but the smaller ones she worked with just don't take directions very well.

(Nirody) They escape anything. We found snakes in printers, air vents, under tables and desks. They've just popped up out of drawers. If you have ten snakes, you sometimes don't realize there's nine. Next day you'll find it in the drawer.

(narrator) Some experiments require putting the snakes to sleep.

(Hu) Snakes don't breathe much, so this takes a while. They can hold their breath for a couple minutes. They have slow metabolisms because they're cold-blooded. They're almost asleep.

(Hu) If you take this cell phone,

(Describer) He lays it on a panel, which he tilts, and the phone slides down.

it'll slide equally in all directions. It's because the bottom is flat. These snakes--you see how they have these scales? They're like overlapping shingles on your house. If you rub the snake towards the tail, it feels very smooth. That's the direction the snake moves in. If pulled along by the tail, the scales will catch.

(Describer) The panel is tilted again.

(narrator) When you put these snakes on an inclined plane, the snake that's head first moves fastest. Tail first comes in second. Sideways is last because of the friction of their scales. For decades researchers thought snakes moved through a forest by pushing off rocks, twigs, branches. But that did not explain their relative ease navigating smooth surfaces.

(Hu) The snake has overlapping belly scales that push into small bumps in the ground. That small amount provides enough force for movement.

(narrator) If the scales are covered, there's no traction, and the animal goes nowhere fast. Look how it struggles compared to an unclothed snake.

(narrator) This milk snake showed Hu what it thought of the exercise. But these snake moves are valuable in merging math, biology, and engineering. Anyone can put snakes to sleep and see that their bellies are smooth one direction and rough another, but it's only using the math that tells you that these friction measurements are sufficient to get these snakes to move.

(narrator) Hu can calculate when snakes use each of four movements, or gaits, to get around.

(Hu) A slithering snake, not going very fast, will use gear two. Gear two, instead of undulating, will be extending and contracting. It's automatic--when they're hatched they can do all gates. This is what they do when going through small tunnels.

(narrator) The other two gates are sidewinding and a straight-line motion. An understanding of snake movements is helping engineers design better snake-like robots.

(Nirody) If you have a limbless robot for a search and rescue team, they can get into much smaller spaces.

(narrator) Because they're so different from humans, snakes often get a bad rap. Someday soon a snake, at least a snake robot, may work its way into many people's hearts--literally. Instead of opening the chest, you can drill two holes and insert surgical snake robots to perform operations. The healing time is faster.

(narrator) Sometimes modern technology can learn a thing or two from a simple, elegant design from Mother Nature.

Snakes certainly make it look easy when they slither forward, leaving perfect S-curve tracks behind them, but scientists have long been puzzled by the mechanics of their locomotion. Now, after a series of experiments and some computer modeling, David Hu has cracked the case. With funding from the National Science Foundation, he’s using math to determine how snakes slither and it turns out they move in a much different way than scientists have long thought.