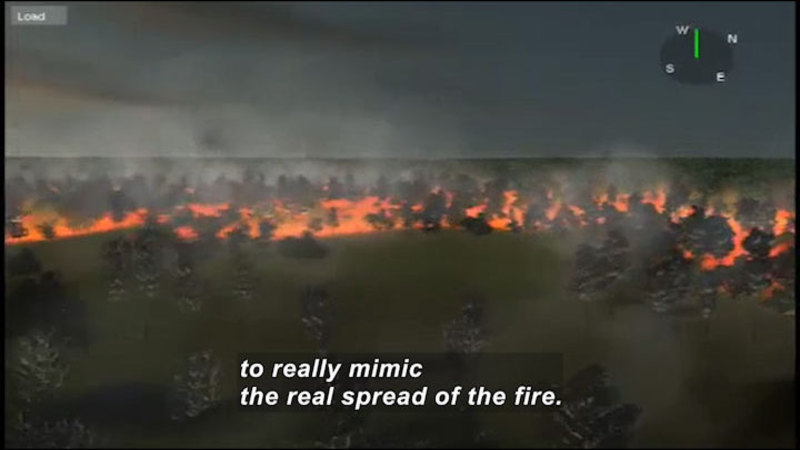 (Describer) Wind blows a fire along a forest floor.

(male narrator) This fire is real.

This one is pretty close, using technology called "mixed reality."

(narrator) The Media Convergence Lab is a vibrant place on the University of Central Florida campus.

(Describer) When a stick is moved...

experiences that put you in the middle of it all. These tools can make any subject come alive. The whole idea behind the forest fire project came from people in another discipline walking through our lab and realizing that we have technology to solve problems that they have.

(narrator) The problem three UCF departments tackled-- find out if virtual reality would motivate Florida residents to invest in wildfire protection. Stephen Fiore is director of the Cognitive Sciences Lab. From psychology you had the study of expertise and decision-making. From computer science you had virtual reality simulations of real-world contexts. And from economics you had environmental policy and decision-making. We realized we had a unique opportunity to combine these approaches.

(Describer) In a video game, a soldier rappels.

(narrator) Virtual reality is widely used for video games and military training, but is it effective in public safety and policy decisions? A National Science Foundation grant aimed at interdisciplinary research helped scientists find out. Here's what participants saw.

(Describer) In the animation, a line of flames moves through a forest with smoke trailing.

You can move through the whole fire and change perspectives, fly out or fly in. We try to make it as realistic as possible to really mimic the real spread of the fire.

(narrator) Test subjects get real money-- a hundred dollars to bet whether a lightning strike starts a fire that burns the house down. About 300 people will take part in testing. I gave them money. I said, "You can use this money to pay for a prescribed burn.

If the house doesn't burn, I will pay you to buy it back." There are real economic incentives involved.

(narrator) Professor Elisabet Rutström specializes in experimental economics. The next step, to customize these videos so people see landmarks in their own towns, making the message about fire risk more personal.

(Rutström) We find that people make better decisions when they are shown virtual reality simulations, being able to interact and move around and see the information from the angle they need. Rather than being shown still images or pictures, they're always very limited. Virtual reality software had a significant impact on the accuracy of people's perception of the risk.

(narrator) To make sure their academic design matched realities on the ground, the researchers worked closely with local fire experts. I'm the fire boss for the University of Central Florida.

They came to us as experts on vegetative communities in Florida and the visual components of the program they were building. Also to help educate them on prescribed burning and wildfire vernacular.

(male) I was trying to make sure that it depicted wildfires as accurately as possible. I was interested in what kind of things went into it-- weather parameters, landscapes, that kind of thing.

(narrator) The project sometimes meant leaving an academic comfort zone. For Fiore it meant getting his clothes smokey to witness prescribed burns. It was an interesting experience to take live video and get different examples of the fire in a palm tree versus a palmetto versus in just grass, to see the smoke, the color of the smoke, the form of the smoke and how wind interacted with the smoke color and form based upon the type of vegetation.

This is the beginning. I think virtual reality will become a very important part of social sciences research in the future.

(Hughes) Everything we do we want available to the public, to other universities, to continue the research.

(Fiore) I do think that science has matured enough in the past century, where we can begin to solve some of these really complex environmental, medical, social problems through interdisciplinary research.

(narrator) The next step, these scientists say, is getting politicians and policy makers to deal with daunting problems, whether it's wildfires, traffic, or water policy.

In a year when many Floridians have experienced first-hand the dangers of raging wildfires, University of Central Florida researchers are preparing to study whether interactive, virtual reality simulations of wildfires can make residents more willing to invest in preventing them. With funding from the National Science Foundation, the UCF research team is developing an interactive simulation of a wildfire spreading through Volusia County. Participants will decide how much they want to invest in prescribed burns and insurance, and their decisions will be contrasted with those who only receive written information about the danger of wildfires.