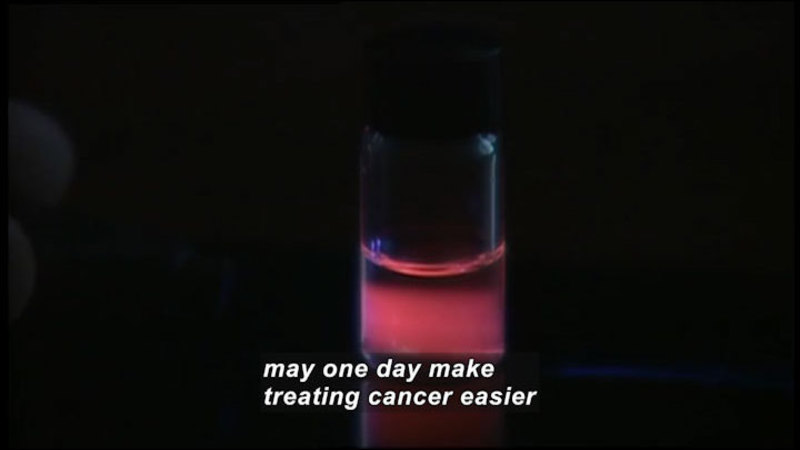 (Describer) Streams of light collide to create a globe filled with water. Title: Science Nation. In a lab, a man studies a substance in a vial.

(male narrator) Researcher Michael Sailor hopes the tiny nanoparticles in this vial lighting up, may one day make treating cancer easier than putting on a Band-Aid. They've gotta light up, glow, then find the tumor. I went in for a biopsy.

I found out it was cancer. I have three girls, my husband, and I.

Three of us have cancer.

(narrator) Maggie and Lydia, diagnosed and treated for breast cancer, can talk about the issues and images that come to mind with the words, "You have cancer." The mammogram was irregular. My first surgery, they removed 4 1/2 centimeters. What's next? What do I need to do? That was anguishing to decide to do chemo. I cried a few tears. You have aching body, you feel depressed, you have headaches, muscle pain, nausea--everything. And everything 24/7.

(narrator) At the University of California, San Diego, Sailor is working to dramatically change those images and how cancer is treated. He's on a quest to create nanoparticles that travel through the bloodstream, latch on to cancers in their earliest stages and destroy them. You'd like to find the tumor when it's at one-cell level,

a single cell of a tumor that's just starting to form. We can't do that now. But one of the long-term goals in nanotechnology is to do that.

(narrator) What Sailor has done is figure a way to make nanoparticles seek and destroy certain cancers in mice. The NSF has been key for my research program.

(narrator) Because 17 years ago when he received funding from the National Science Foundation, Sailor wasn't thinking cancer. He was figuring out how to make nanoparticles. We didn't consider human use. We thought, "We can break up silicon chips and make nanoparticles."

(narrator) Why silicon? Because silicon can degrade in the body into harmless by-products. We'd like to have a nanostructure that goes away once it's done something in the body.

(narrator) What's evolved is a recipe for making nontoxic nanoparticles. First, take a silicon wafer, the same used to make computer chips, and turn it into a sponge using an electrochemical bath. It punches tiny holes into the wafer, each 10,000 times smaller than the diameter of a human hair.

(Sailor) Those holes are not so small you can't load drugs into those pores. They're very small silicon sponges. But they're not that small. They're still pretty big.

(narrator) Next is turning the spongy wafers into nanoparticles. What we have here is an ultrasonic bath,

(Describer) A vial is held in liquid.

(Sailor) These aren't nanostructures yet. These are still about micron scale. After eight hours, these will be small enough to inject inside the body.

(narrator) The particles are also chemically coated to emit a fluorescent glow. We want them to get into the body, find the tumor, and then glow, which allows us to image them.

(narrator) Today nanoparticles injected in mice are helping researchers find certain cancers. Sailor hopes in five to ten years these materials will be proven safe and effective for humans.

(Describer) Maggie walks through a courtyard.

(Sailor) One of the goals of nanotechnology is to build these vessels that can hold a drug that is toxic to the body-- in fact, it's toxic to the tumor too-- and it hold that drug until it finds the tumor. Then it lets it out.

(narrator) What keeps Sailor going are the letters he receives.

(narrator) The letters outside his office remind him and his team and future scientists of the importance of this research.

(Sailor) Having the personal interaction with an old friend who's husband died of cancer, now her mother-in-law has got cancer, and she's afraid her daughter's gonna have cancer 'cause it's a genetic indication. You do what you can do.

Being a cancer survivor, I really believe that early detection is vital.

The less they have to remove, the sooner that you get the diagnosis, the better the quality of life. If they could target just the cancer cells, oh, that would be amazing.

Professor Michael Sailor hopes to dramatically change how cancer is being treated. With support from the National Science Foundation, he is on a quest to create nanoparticles that travel the bloodstream, latch onto cancers in their earliest stages, and destroy them.