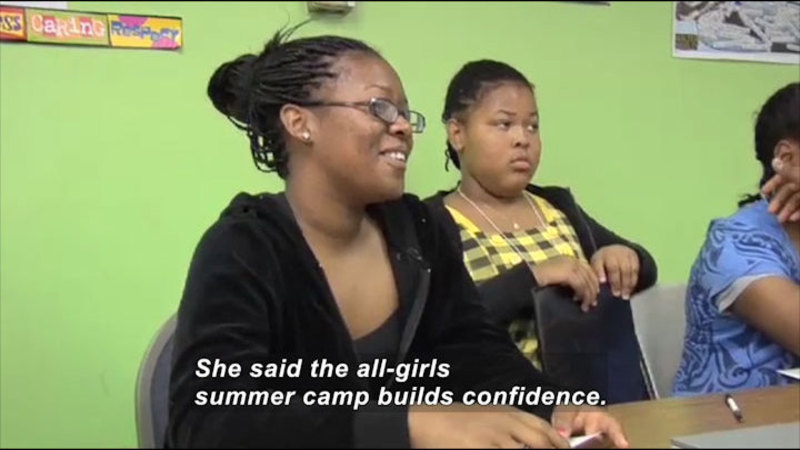 (Describer) Streams of light collide to create a globe filled with water. Title: Science Nation. A girl looks into a huge telescope.

(male narrator) They say women are from Venus. If so, these girls are dying to know more.

(narrator) They are seeing the solar system at the Chabot Space and Science Center in Oakland, California. It's hands-on. It's not text book.

It's not a teacher lecturing about something. It's more you get to do what you want to do.

(narrator) Twenty-one bay area 6th through 10th-graders spent a week studying the heavens and designing video games as part of Universe Quest. It's a National Science Foundation funded project aimed at getting girls hooked, not just on Venus, but on scientific exploration. Today we're going to learn about requesting images from a telescope.

This is a digital camera that fits on the back of a telescope.

Just like we have lines of longitude going up and down from north to south, if you extend those lines out into space, we now have what's called a celestial sphere.

(narrator) The goal is letting them figure things out for themselves-- maybe converting numbers into a picture of a constellation or wearing filter glasses to determine what color an object is in outer space.

Take one, pass it around.

(Describer) A couple students sit by a man at a laptop.

(narrator) Carl Pennypacker is in charge. He's an astrophysicist at the University of California Berkeley Space Sciences Lab. The educator says a big part of good teaching these days is keeping up with technology that kids embrace easily. Unless we use some of the language that is so intrinsic to their daily life, we're working at a much lower efficiency. So again, games, computers, technology.

(narrator) Things like a Skype video conference with astronomer Dara Norman at the National Optical Astronomy Observatory in Tucson. There is energy around a black hole. There is no light radiating from it. It's all trapped within the confines of the black hole.

(narrator) She explained how a career studying black holes and dark matter can be exotic and challenging. In essence, math and science can lead to great adventures.

(Norman) One of the most interesting, coolest places I went to because of my job was Saint Petersburg, Russia. I got a chance to live in South America-- to live in another culture for five years. All right. Good luck, guys!

(female) I love space a lot. I have been studying it since I was born. I love space. It's like, the best.

(narrator) No summer camp is complete without recreation. But why miss a teachable moment? At Golden Gate Recreation Area, the girls created seesaws from driftwood. That prompted some impromptu physics lessons.

(female) In elementary school from grades K through 5, boys and girls are really interested in science, but something happens in middle school.

(narrator) Sharon Parker is cofounder of the ASA Community Science Center in Oakland, where Universe Quest programs run during the school year. She said the all-girls summer camp builds confidence. Programs like this allow girls to just be with girls and to ask questions, especially the ones who might not have asked questions.

The boys jump up and take center stage and don't leave much space for women to blossom. We're sort of creating a safe, fertile ground for them to discourse, dialog, to see things that matter.

We hope that, as the program progresses, the girls will be able to communicate with other students throughout the world.

(narrator) The students also created their own video games. Good preparation for a whole range of 21st Century jobs. Many of these young women already have plans for a science-related career. Not astronomy, but I would like to become a dermatologist. An engineer or an ob-gyn doctor. Something in the science field. I want to be a marine biologist. I've always loved it. We don't want to produce a million astronomers, but if we produce kids who love science, technology, engineering in the future, that'd be a good thing for the world.

(narrator) Whatever they end up doing, they have learned the most important lesson-- there's a whole universe of options, and there's no good reason to put limits on their quest.

Carl Pennypacker at UC Berkeley runs Universe Quest, a summer program supported by the National Science Foundation to engage girls in science exploration. Some of the summer activities include: looking through a world-class telescope, going out to the beach to measure tides, and designing online games.