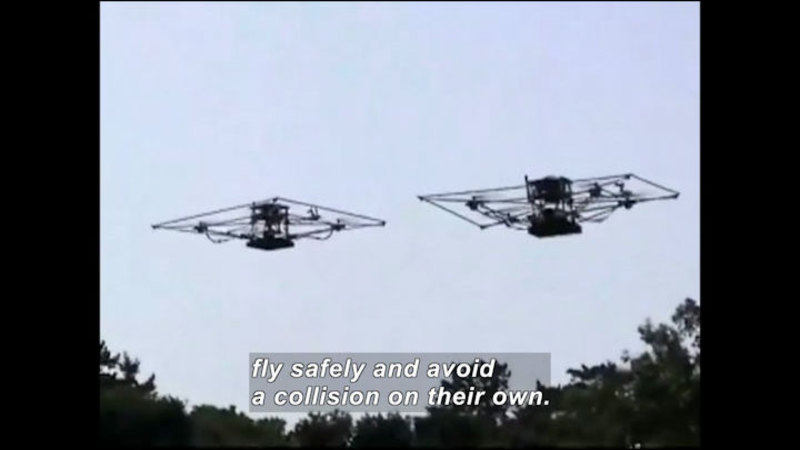 (Describer) Streams of light collide to create a globe filled with water. Title: Science Nation. A helicopter descends to a dock.

(male narrator) In New York City, the airspace 1,000 feet over the Hudson River is very crowded. It's up to pilots, not air traffic controllers, to see and avoid running into another aircraft. It may sound like the Wild West, but over the years the system worked well

until August 8, 2009, when a helicopter carrying some sightseers collided with a small single-engine airplane over the river. Nine people died in the crash. Wouldn't it be nice if aircraft could help pilots avoid trouble.

(Describer) A box with square frames around it rises.

(narrator) The answer might be here. They may look like toys, but these small helicopters fly safely and avoid a collision on their own.

(Describer) Propellers are on the square frames.

(female) What we're interested in is developing automated collision avoidance algorithms that can be used for civilian aircraft in the air traffic control system.

(Describer) A panel is taken off the top.

(narrator) Electrical engineer Claire Tomlin and her students are testing the idea without using expensive aircraft, runways, and control towers. Their key research tools are these modest quadrotors, also known as STARMACs.

(Tomlin) We built it with these light carbon fiber tubing and these plastic tube straps, which are good--it's like LEGO, assembling things quickly.

(narrator) Tomlin's earlier work at NASA involved a lot of expensive equipment. So as a Stanford, and now Berkeley professor... We built our own platform, which is stable, robust, you can fix it in about ten minutes. We designed our own printed circuit boards. Basically, the brains of the vehicle are whole computers onboard a circuit board that we designed ourselves.

(male) Most helicopters will have complicated mechanisms for tilting the main rotor to fly. The way we control STARMAC is, you spin one motor up and one motor down. That allows for a simpler control mechanism than with actual helicopters.

(narrator) Tomlin used a career award from the National Science Foundation to create the first of these aircraft. There's been trial and error. Tests are done inside the lab or outdoors. Many of the discoveries made here can be adapted for use in civilian and military aircraft. Vehicles may differ in size, but the scientific principles involved in collision avoidance are the same.

(narrator) Students try to get aircraft to crash into each other. But the collision avoidance program, based on so-called reachable set technology, kicks in and creates a no-fly zone.

When the vehicles detected they were coming close to each other's no-fly zones, the automated algorithm would say, "No, you can't do that." It would safely guide the vehicles along the boundaries.

(Describer) An avalanche rolls down a mountain.

For instance, robots like these could also be valuable searching for lost skiers in an avalanche. For this test, researchers used off-the-shelf rescue beacons, the same devices used by backcountry skiers. While one helicopter sent out a distress call, the others receiving the signal communicated with each other to quickly find their stranded counterpart.

The blue dots is where he thinks the victim could be.

(Describer) A search area map is by video of the search.

As they're flying around taking measurements, where the victim could be reduces into this small area, which is about 5 centimeters. This only took a couple minutes before he had the victim.

(narrator) This test, the choppers have been programmed to navigate around several obstacles.

(male) We told the craft the obstacles' location and implemented a path to avoid them.

(narrator) To be the most value to humans in navigating narrow or dangerous places, these bots must have the tools to make those decisions on their own. Adding cameras and other sensors make that possible.

(narrator) Maybe one day the reward might be measured in crashes avoided and lives saved. For Science Nation, I'm Miles O'Brien.

Claire Tomlin is pushing the envelope of aerospace design by building a new class of autonomous helicopters, with support from the National Science Foundation. These aircraft don’t need a pilot steering them remotely because they navigate themselves. Tomlin believes these helicopters will have applications in the military, civilian search and rescue, and many more venues.