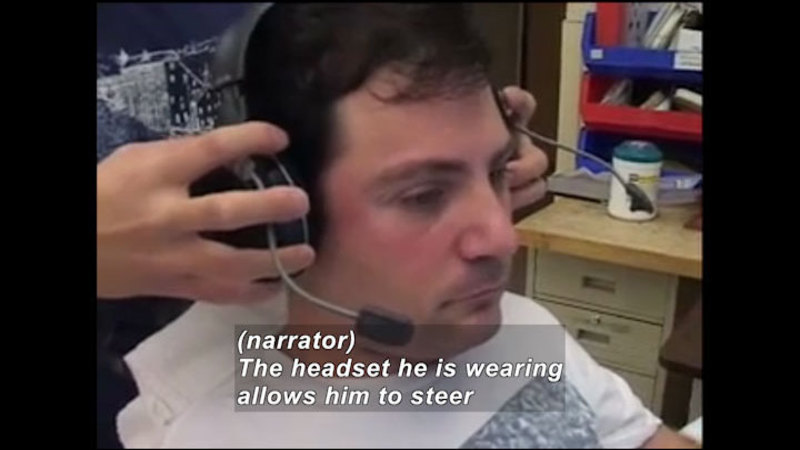 (Describer) Streams of light collide to create a globe filled with water. Title: Science Nation. A man in a harness is lowered.

(male narrator) For Jason DiSanto, a measure of freedom and independence may one day be on the tip of his tongue.

(Describer) He wears a headset.

(narrator) The headset he is wearing allows him to steer his wheelchair with his tongue. It is the brainchild of Maysam Ghovanloo, a researcher at the Georgia Institute of Technology.

(male) There is this strong connection between brain and tongue. So even people with high-level spinal cord injuries, they don't lose their movement of the tongue.

(narrator) Jason's life changed in a split second in April, 2009 , when he dove into a swimming pool.

(DiSanto) I hit my head on the bottom of the pool and broke my neck. So I have my shoulders, my head, and neck. Everything below my shoulders is paralyzed. It takes me a while to eat.

(narrator) It's not an overstatement that Jason's life has changed since the accident.

(narrator) And there is the stark reality of his physical limitations. I have a little spasm here. My wife takes really good care of me-- feeding me, brushing my hair, brushing my teeth, turning on the TV, changing channels. I can't do much because I have no use of my hands.

(Describer) Govanloo confers with a colleague who holds the headset in front of a computer.

Do we have a magnet to test?

(narrator) For the past four years, Maysam Ghovanloo has worked to improve life for quadriplegics like Jason. With support from the National Science Foundation, Ghovanloo and team devised a headset that responds to a magnet. This plus a wireless connection and navigation software will allow Jason to steer a wheelchair with his tongue.

(Ghovanloo) The tongue has so many degrees of freedom that you can touch every single tooth with the tip.

(narrator) A course is laid out where Jason receives treatment. Using a dental adhesive, a small magnet is temporarily glued to Jason's tongue. Two sensors are attached to each side of a headset. Those sensors will detect changes in the magnetic field as Jason moves his tongue inside his mouth. For the left turn is...

(Describer) Without the sensor, he moves his tongue.

moving my tongue to the left-hand side. And then the same for the right.

(Describer) He moves it to the right.

Forward and back is on the top of my mouth.

(narrator) The sensors send the information to a laptop, maybe someday a smartphone, which transmits that information to the device. In this case, the wheelchair. It can control other things also. You could control a TV, access a computer, drive your wheelchair, you name it. Anything that can be connected or controlled by a computer can be controlled by the tongue drive system. I thought it was really quite easy to move around and control the chair. Jason says it's easier than the sip-and-puff method he uses to operate his current wheelchair. Since the tongue driver could help him control any number of devices, like TV or his computer, it means more of the most precious commodity-- independence. Jason can easily shut off the tongue driver with his tongue when he wants to talk. He appreciates this professionally as well. He's an electrical engineer.

(Describer) Guiding the chair through the course, he runs into a pylon on a corner. The colleague kicks it back in place.

This is your test drive.

(narrator) A commercial version is years away, but Jason can see and touch the future right here. Eventually, researchers hope to shrink the device into an out-of-sight mouthpiece with a tiny magnet pierced on the tongue. I wouldn't stand out as much. Sometimes it's a little hard being in a wheelchair. In public, people don't know how to approach you. I think the less awkward I look, the better and easier people would be to approach me.

(Describer) He drives through an open doorway.

With funding from the National Science Foundation, Maysan Ghovanloo at Georgia Tech designs technology that allows disabled people to control everything - from wheelchairs to computers - with their tongue. Jason DiSanto, who is paralyzed from the neck down, is testing the tongue controller by navigating his wheelchair around a small course.