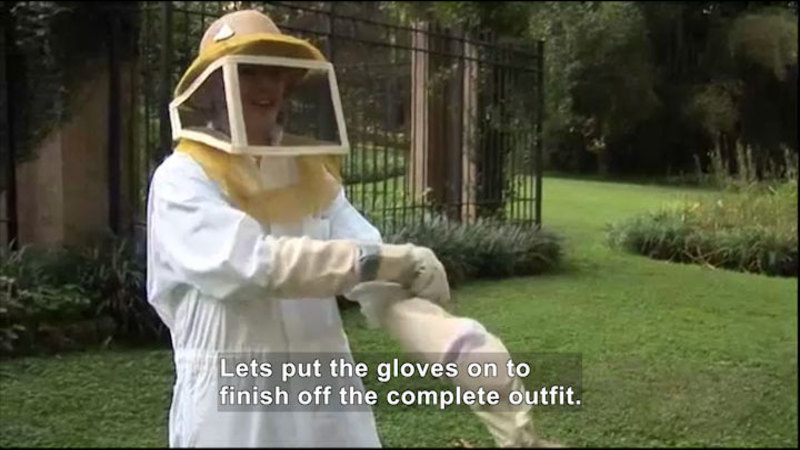 (male narrator) Learning the secrets of the birds, bees, and wasps can be a hazardous pursuit. Did you get stung? I sure did. Your leg swelled like a melon.

(narrator) Georgia Institute of Technology biology professor Michael Goodisman and his team are willing to take it on the ankle and wherever else these aggressive yellow jackets may sting.

(Describer) They wear hats with netting on them.

(narrator) They want to know what happens in the queen's boudoir. Lets put the gloves on to finish off the complete outfit.

(narrator) They also want to make walking through this backyard a little less perilous.

because they are the nastiest, most aggressive, insects I've encountered.

(Describer) They fly around ivy on a wall.

(narrator) He's talking about yellow jackets-- wasps with an attitude. And perhaps not coincidentally, the Georgia Tech mascot.

They build nests in bad places, underneath plants and houses. We're gonna dig them out of the ground while still alive, pour a little ether down their entrance to, hopefully, anesthetize them. Here they come.

(Describer) Kneeling in the bushes, he opens a canister.

I can't get it in there, can you? They are agitated.

(Describer) He pours the clear liquid.

(Describer) Reaching down, he pulls out a layered nest.

She's big. Not many workers, though. Very interesting. Yellow jackets may seem eager to inflict pain, but they have some important redeeming qualities. They kill harmful garden pests and are among the most social insects on earth, like their stinging cousins, the fire ants and honeybees.

(male) They are like honeybees in that they have a single queen heading the colony. There's the queen-- this larger individual surrounded by all of her daughter offspring. They'll come to in a minute.

(narrator) Evidently, yellow jacket queens are players. DNA testing reveals they have multiple sex partners, unlike honeybees. So, instead of sister workers, half-sisters guard the nest and feed the queen. Goodisman is using National Science Foundation support to try and understand these complex relationships and how they impact these intricate communities.

(male) There's a big question about why females of any animal species would mate with multiple males.

(narrator) Goodisman is not just focused on sex, he's also curious about how social insects within a community work as a team. They have the highest level of sociality.

(narrator) He also studies another aggressive backyard pest, fire ants. At this Georgia Tech physics lab, photographs and X rays capture fire ants digging elaborate underground tunnels. For these ants, caring for their brood and keeping their queen safe are more important than their own lives. This floating blob of fire ants demonstrates their allegiance.

(male) Fire ants do form these living rafts of ants. When they get flooded, they basically float on their young and they'll cannibalize each other to some extent, until they hit land. The colony survives. That's what it's about. The colony and the queen survive. That is a queen.

(Describer) She crawls on his glove.

She's very different from the workers, much larger than the workers. The male has wings. It's got a tiny head and big shoulders, which is a running joke. They're all muscle and little brain. They don't do much except fly off and mate. We study social insects to understand social behavior.

(narrator) He also understands a lot by studying wasps nests. He hopes to learn what determines whether an egg becomes a worker or a queen.

(male) Queens are much larger. They're built differently. Their physiology is different. They're really two completely different animals.

(Describer) He holds a nest layer.

What we have here is actual comb. You see the cells here are pretty small. That's because this comb is used exclusively to rear workers and males, both of which are relatively small.

(narrator) The queen's quarters, or comb, have much bigger cells. Goodisman believes that may make the difference.

(Describer) He puts it on top of a regular one.

This comb was produced exclusively to rear new queens, which are larger than workers and males.

(Describer) In the bushes, he pulls out another nest, and puts it in a container.

Let's get this sucker out of the ground.

(Describer) The container is closed.

(narrator) the hunt is a success. The homeowner has reclaimed his garden and researches leave with three nests. And this time, nary a sting.

(Describer) They're stacked up, with screens in the tops.

(narrator) Careful how loud you say that on this campus.

(Describer) The mascot is shown.

Michael Goodisman is digging up the dirt on yellow jackets' peculiar lives by studying their nests, behavior, and genetic make-up. With support from the National Science Foundation, he is getting a better understanding of what drives their complex family relationships. Yellow jackets, like honey bees and fire ants, exist in a sophisticated social hierarchy. Unlike other animals that travel in packs or swim together, these social insects will literally sacrifice their own survival in support of their hives, nests, and colonies.