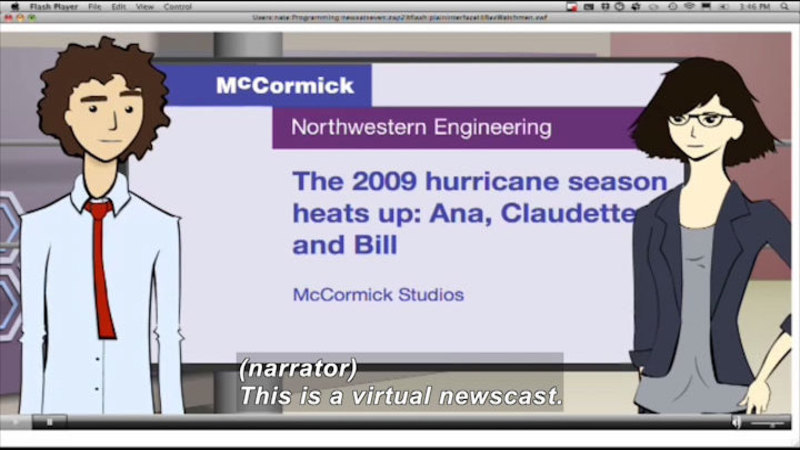 (Describer) Streams of light collide to create a globe filled with water. Title: Science Nation. A young man pushes buttons on a control board.

(male narrator) The TV news business is the same as it's always been...

(Describer) On a headset...

Fade up music and camera two.

(narrator) high pressure, brutal competition. These undergrads at Ithaca College are learning the ropes the way I did a generation ago. Then you're going to read it on camera one.

(narrator) The times, they are a'changing. So is the news biz. These reporters- and anchors-to-be may find their competition isn't even human. Welcome to McCormick Studios.

(Describer) An animated man and woman are on screen.

In today's science news, the 2009 hurricane season heats up.

(narrator) This is a virtual newscast.

It's part of a project called News at Seven, developed at the McCormick School of Engineering at Northwestern University in Evanston, Illinois. The story selection, the words, the graphic background, even the expressions of the animated newscasters, or avatars, are all determined by computer. With help from the National Science Foundation, Kristian Hammond is developing artificial intelligence that, in some ways, can think like a journalist. We can do it for everyone and for organizations. So, some organization that can't afford a studio and performers and writers, can actually build a News at Seven piece in a matter of moments, and do it cheaply and, quite truthfully, do it easily.

(narrator) Hammond's work is looking beyond virtual newscasts. He's also created a program that generates opinion. The movie review dynamic. That dynamic comes from us watching shows like Siskel and Roper, where we saw two people interacting.

(narrator) Computer science grad student Nathan Nichols generates the review by having the computer scan the Net for images, clips, and information about the movie "Watchmen." Seconds later, two virtual reviewers are going at it. The music is perfect, especially the opening montage set to Bob Dylan's "The Times They Are A-Changin'." No, they've made the most reverent adaptation of a graphic novel ever.

(male) We might get a sentence from a blog, a review, or Twitter. The system knows how to combine them.

(narrator) The movie reviews generated here are online at zap2it.com.

(Describer) Hammond walks down a hallway.

(narrator) Where Hammond goes next, no sports writer would go. He's having the system write up a Wildcat's ballgame recap. Starting with the game's numerical data--

(Describer) He sits at a laptop.

the box score, the play-by-play, we just push one button and the system generates

(Describer) He reads it.

"Northwestern held off a late comeback bid by Georgetown to defeat the Hoyas 5-3 Friday."

(Describer) The article's byline says, “by The Machine.”

People who write sports stories are made anxious by it.

(narrator) But Hammond believes the more computers understand human behavior, the easier it will be for us to interact with them.

(male) The very nature of our work is to understand people and to map that understanding on the machine.

(Describer) Beside a laptop with the cartoon anchors...

But wait a minute! Surely there'll always be a role for real-life, flesh-and-blood TV new guys like me. These sons and daughters of Max Headroom won't be tomorrow's news stars, right? Don't be so sure, my carbon-based, air-sucking friend. We silicon stars work cheap, get up earlier, stay later, don't demand a fat, clothing allowance, and never, ever have a bad hair day. Uh-oh, maybe it's time for me to circulate my résumé in Second Life. For Science Nation, I'm Miles O'Brien.

Tired of the same old evening news? Researchers at Northwestern University are inventing ways to make the news a lot more interesting. With funding from the National Science Foundation, Scientists at Northwestern's Intelligent Information Laboratory are working on a project that creates customized newscasts, read by online avatars based on individual preferences. The program called News at Seven is a system that automatically generates a virtual news show.