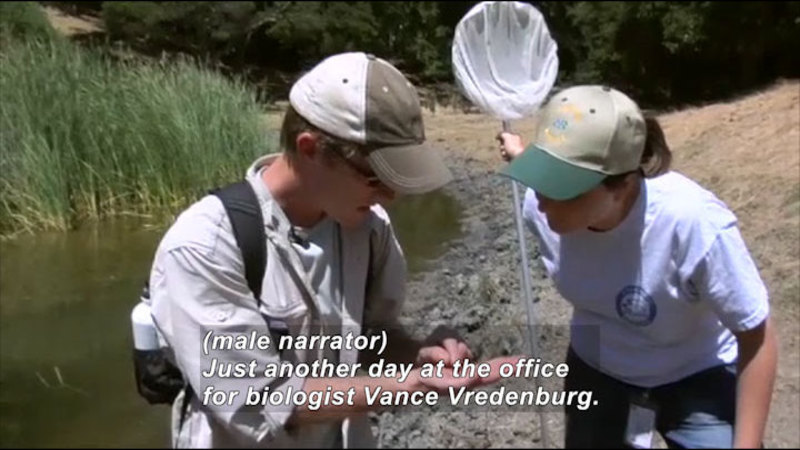 (male) This is just wonderful. There's lots of newts here. This is great.

(male narrator) Just another day at the office for biologist Vance Vredenburg. On this day, the office is a pond in a protected watershed east of San Francisco, where he and Jessica Purificato catch and examine frogs and salamanders.

(Describer) He holds a salamander in a gloved hand.

(narrator) While the animals in this pond appear healthy and plentiful, biologists are shocked by what they're seeing around the world: disease, pollution, and loss of habitat are killing off these historically tough, resilient creatures.

(male) More than 30% of the world's amphibians are in trouble. For example, amphibians have been on earth for over 300 million years. Long before the dinosaurs ever conquered the earth and died off, amphibians were already on land. They were the first vertebrates to be crawling and hopping around on land.

(Describer) He rubs the salamander with a cotton swab.

(narrator) A swab of this guy's feet will reveal whether it's infected with a deadly widespread disease called chytrid. Vredenburg has been investigating chytrid with help from a grant from the National Science Foundation.

(male) It's a disease caused by fungus. The pathogen is an aquatic fungus that infects the skin of amphibians. We're talking somewhere between 200 and 400 species of amphibians being driven to extinction by this disease. That's never happened before in recorded history. This is what we've been finding lately.

The size of the frogs are about the size of a small bullfrog. Here we've got some bones of frogs that have been eaten by aquatic insects.

(narrator) Another complication-- climate change could be making the fungus worse. There are some people that think it's climate change itself that's triggering this release of this pathogen from being potentially something that doesn't cause a problem to something that's suddenly really deadly.

(Describer) A woman works in a lab.

(female) These samples are from Little Indian Valley near the Sierra Nevadas, north of Yosemite National Park.

(narrator) Graduate student Natalie Reeder is screening those samples to see if chytrid DNA is present on the frog's skin. The numbers of frogs are dwindling so much that on this last trip, I was out for about four days, and I only came back with forty samples. Vredenburg is trying to determine why some populations can recover from the chytrid fungus, while others are wiped out.

Or is it possibly a different strain that's less deadly of the fungus?

(narrator) While searching for those answers, scientists are doing whatever they can to save these animals.

(male) When these animals are dying left and right, you can only, as a person who cares about these amphibians, I can only document that for so long. I thought, "What can we do about it?"

(narrator) One thing he did at the Sierra Nevada Aquatic Research Lab, he set up a sort of amphibian spa. Instead of a milk bath, these critters spent several days in a medicinal brew.

I got permission from the National Park Service to treat some of these animals with antifungals.

(narrator) Many of those amphibians, microchipped after their treatment in 2006, have been caught again and are disease free. But with the crisis so widespread, scientists are trying other strategies as well. At the San Diego Zoo, there's a captive breeding program underway, with the goal of returning healthy frogs to the wild.

(male) It's a Noah's Ark perspective of race in front of the wave of death to save them from extinction. You got one. Cool!

(narrator) Back in the field, an adult salamander gets a once over.

(male) He no longer has external gills. His skin is rougher now.

(narrator) Vredenburg works with conservation groups and scientists around the world, who are seeing the same catastrophic scenario.

(male) We share many traits with amphibians. I think it's really important that we understand, as best we can, why these outbreaks of disease are occurring.

(narrator) Because creatures as spectacular as these deserve another 300 million years. For Science Nation, I'm Miles O'Brien.

Disease, pollution, and loss of habitat are killing off hundreds of species of amphibians. One of the biggest threats right now is an aquatic fungus called chytrid that infects the skin of these historically tough, resilient creatures. With funding from the National Science Foundation, Biologist Vance Vredenburg studies the disease and shares his research with scientists who are dealing with this crisis on every continent where amphibians live.