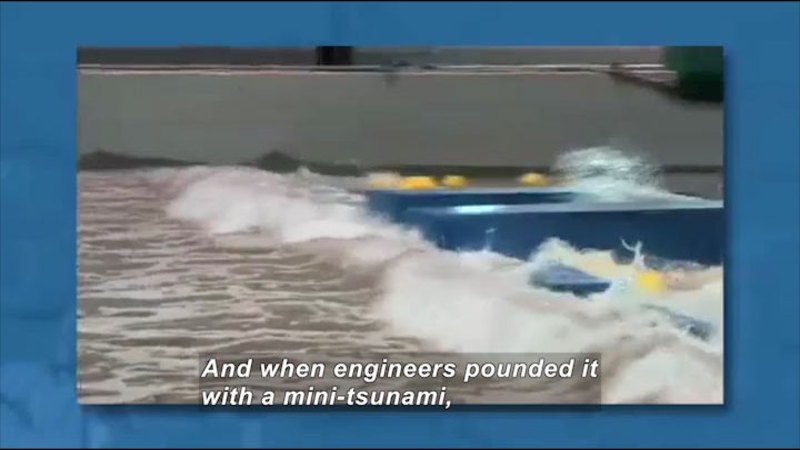 (male narrator) If you want to learn about giant tsunamis, it's best to bring down their size. That's what these waves and scale version of the town of Seaside, Oregon are about. And when engineers pounded it with a mini-tsunami, they learned something really surprising. More on that in a moment. But first, you might be surprised to know tsunamis are a threat for the west coast of the U.S.

(male) In the field, they see the before and after. This allows us to see the during.

(Describer) A wave is sent through a channel.

The wave breaks off the coast. This was an aluminum wall.

(Describer) Another is sent through.

What would be the impact of that pole if it hit a building?

(narrator) After Hurricane Katrina, and the Asian tsunami that killed more than 200,000 in 2004, Cox and his colleagues stepped up efforts to learn more about natural disasters. That's why they created physical and computer models of the town of Seaside. Which returns us to the surprise. When they pounded it with a tsunami, Cox found that if all the residents headed inland... The casualties were 1,700. Out of 5,000, we lost 1,700.

(narrator) That death rate got him thinking about a different path to safety.

(male) The role of vertical evacuation. This means going up into a building or onto a earthen mound. You're still in the flooded zone, but you're much safer by going up.

(narrator) When they added vertical evacuation to the test...

(narrator) And perhaps more importantly, it proves the model for good engineering is not simply defining problems, it's about solving them... and making some waves. For Science Nation, I'm Miles O'Brien.

It’s called a wavemaker, and its 300 feet long and 12 feet wide. With support from the National Science Foundation, this huge new tool, the largest of its type in the United States, is helping scientists perform large scale studies on the impact of both hurricane and tsunami waves.