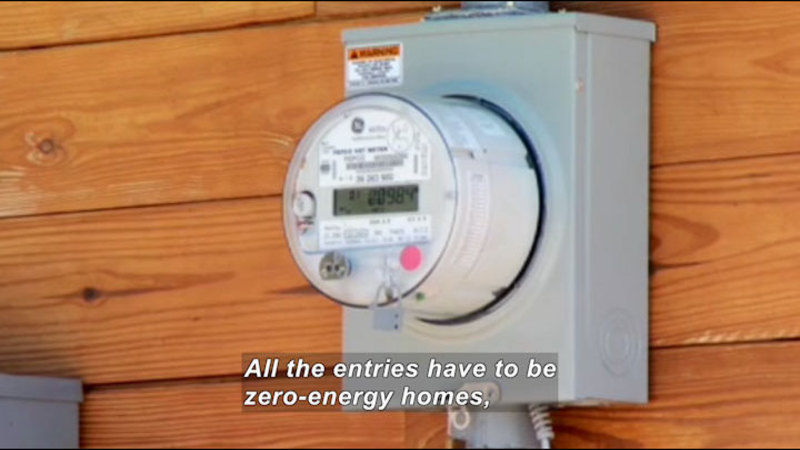 (male narrator) Looking for something new under the sun? Head to the mall. Not the giant parking lot, the greener one in Washington. Home, once again, to some homes that soak up the sun and leave a light footprint on the planet. It's the Energy Department's fourth Solar Decathlon.

The Solar Decathlon is a competition for universities' schools of engineering and architecture to design from the ground up a solar-powered, high-efficiency, self-sustaining house.

from around the world come here... [people cheer]

(Describer) A team breaks a huddle.

waging a battle of mind and muscle

to see who has the best solar home design. All the entries have to be zero-energy homes, meaning they generate as much solar power as they consume. Looks and livability count, as well. The judges consider architecture, engineering, lighting design, even home entertainment. Ten categories in all, hence the decathlon. They test the teams' ingenuity. Take the 2007 Decathlon champs from Germany. This year they have blown the roof off the conventional wisdom, building a house that is completely covered in solar tiles. The team believes the house will produce twice the energy it will consume. The team from Spain is convinced the secret is in and on the roof. It's a sun tracker.

It pivots along the day following the sun.

(narrator) But the hallmark of a truly smart solar house isn't simply photovoltaic panels generating electricity, it's more subtle things, like windows that act like furnaces.

(male) Sunlight gets absorbed by a gel layer in the middle of the system. During the night, that radiation slowly radiates into the house. It's 100% passive and can do 80% to 90% of your heating.

(narrator) All good ideas, but in the end, a repeat victory. First place, overall award goes to Team Germany.

(narrator) The Germans have their day in the sun again. Their novel ideas, and all the others, prove there is hope for a cleaner, greener future on the home front.

The Solar Decathlon is an annual event where collegiate teams design, build, and operate solar-powered homes. In 2011, it was held on the Mall in Washington D.C. Twenty solar-powered homes were sprawled across the mall’s west end, transforming it from a park into something that resembled a quirky housing development.