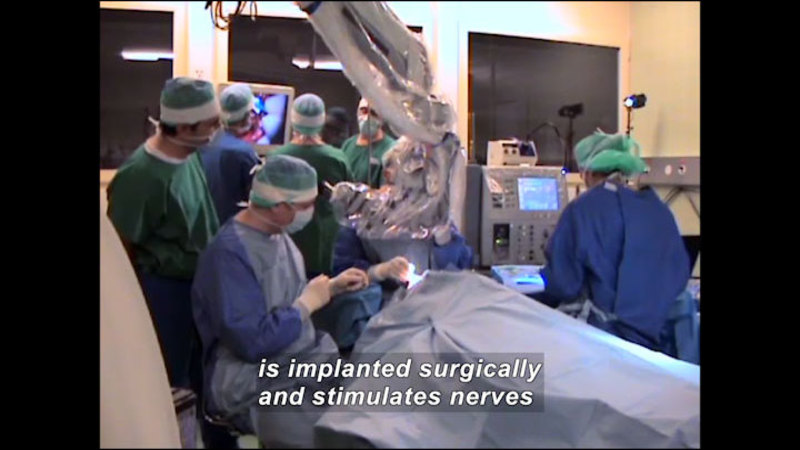 (male narrator) Kathy Blake is strolling in the park by herself. Kathy is completely blind and has been for over 30 years. Life was great the year right before I was diagnosed. I had just started a new job and bought my first new car.

I had just started dating my now husband. Life was good, and then...

(narrator) Then the diagnosis from her doctor-- retinitis pigmentosa, or RP. It's a genetic disease that leads to visual loss and is not curable. The retina's light-receiving cells slowly die, leaving the patient at least partially blind. The doctor had told me, in others, some good and bad news. The bad news is you'll lose your vision. The good news is you won't go totally blind. Unfortunately, I did lose all my vision within about 15 years. I'm one of the retinitis pigmentosa patients that actually it all went.

(narrator) Two years ago, Kathy got some hope. She heard about an artificial retina being developed, with help from the National Science Foundation, at the Doheny Eye Institute in Los Angeles.

A good candidate for the artificial retina device is a person who's blind because of retinal blindness. They've lost the rods and cones, the light-sensing cells of their eye, but the rest of the circuitry is relatively intact.

(narrator) Kathy was the perfect candidate.

(male) In the simplest rendition, this device basically takes a blind person and hooks them up to a camera.

(Describer) In computer animation, a man wears the glasses.

(narrator) It may sound like science fiction and a few years ago, it was. A camera is built into glasses similar to this image, sending radio signals to a chip in the retina. The chip, which fits on a fingertip, is implanted surgically and stimulates nerves that lead to the brain's vision center. Kathy is one of 20 patients who use this device.

(Describer) A woman meets Kathy getting out of the back of a car.

After two years since the surgery, Kathy comes for weekly testing at the University of Southern California's medical campus.

(Describer) She wears the glasses inside.

We're going to play with this.

(narrator) That hole in the center of the glasses is the camera. Kathy scans until she senses objects on the screen and then touches them. The low-resolution image from the camera is enough to make out the black stripes. These are impulses sent from the camera to 60 receptors on the chip. So, what is Kathy seeing?

(female) I see flashes of light that indicate a contrast from light to dark. The flashes are now starting to make a little more sense to me, where... if there is a line that I'm actually seeing, the flash in a line, instead of a flash on and off.

(male) If you've been blind for 30 years and then get this device, there's a learning period. Your brain needs to learn. It's literally like seeing a baby crawl, to a child walk, to an adult run.

(female) I'm always thinking, "Gee, what is that?"

(Describer) Outside, she bumps into a drinking fountain.

(female) Trying to figure out what things are.

(Describer) She runs her hands over it.

Usually, I have to be told what it is. But I know that something is there.

(Describer) She wears a box with the glasses.

(narrator) Kathy takes the device home. The device's software can be upgraded. As the software is upgraded, her vision improves. She was outside with her husband and saw something she hadn't seen in a long time.

(female) As I scanned the sky, I got a flash right where the moon was. I said, "There's a big flash there." My husband said, "That's it." That was pretty amazing to me 'cause I can't remember how many years it's been that I could do that.

(narrator) This technology has a bright future. The current chip's resolution is 60 pixels. Dr. Humayun says that could be increased to over 1,000 in the next version. I think it will be extremely exciting that they could recognize their loved ones' faces and be able to see what their wife, husband, or grandchildren look like, which they haven't seen. My eye disease is hereditary. My three daughters happen to be fine, but I want to know that if my grandchildren ever have a problem, that somewhere down the line they will have something to give them some vision.

(narrator) Kathy is taking the first small steps to make that vision a reality. For Science Nation, I'm Bruce Burkhardt.

Kathy Blake is blind but two years ago she got a glimmer of hope. She heard about an artificial retina being developed by a company called Second Sight and the Doheny Eye Institute in Los Angeles. It was experimental, but Kathy was the perfect candidate. With funding from the National Science Foundation, a camera is built into a pair of glasses, sending radio signals to a tiny chip in the back of the retina. The chip, small enough to fit on a fingertip, is implanted surgically and stimulates nerves that lead to the vision center of the brain.