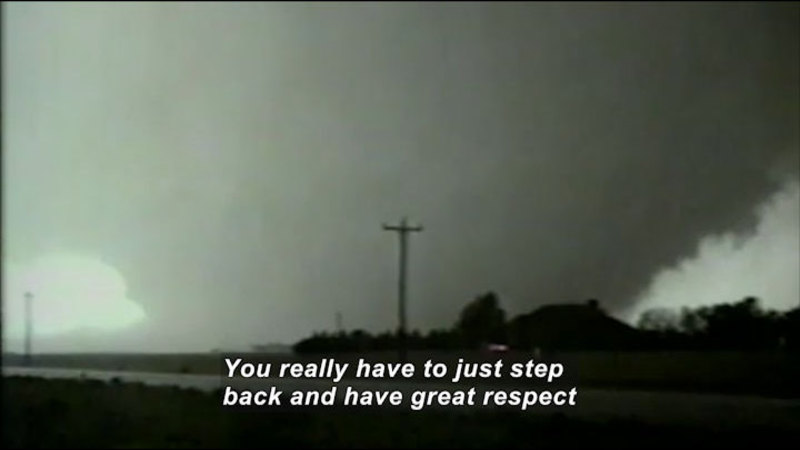 (male narrator) Oklahoma City has the distinction as the largest city for tornado activity. But still, mention May 3, 1999 to almost anyone here, and they'll tell you...

(male) It was a monster-- an incredible tornado.

(male #2) Very large tornado about six miles northeast of us.

(Describer) It's shown in video from a car.

(narrator) That day, an unforgettable tornado ripped through parts of Oklahoma City and its suburbs killing at least 36, injuring several hundred, and causing over a billion dollars in damage.

It's difficult for the atmosphere to create that, but when it does, it's striking. That's what sticks with me.

(male) The Center's mission is protection of life and property by notifying in advance of hazardous weather events, such as tornadoes and severe thunderstorms.

(Describer) A thin tornado cloud reaches down to land.

(narrator) Tornadoes occur in all 50 states, even in Alaska. Nationwide, they are reported year around. In springtime, the area known as "tornado alley" is ground zero.

(Describer) ...in the middle of the country.

Tornadoes often strike with little or no warning. In the U.S., they kill about 70 people yearly and injure close to 1,500.

(Describer) People work at desks and in front of computers.

I think this is good enough to consider a tornado...

(narrator) The ingredients that make tornadoes, like wind speed, temperature, and moisture content, all have to be just right for tornado formation. You remove just a small bit of ingredients and you end up with a rain shower as opposed to a violent storm.

We don't understand the mixing and matching of these ingredients for all these variety of recipes to produce tornadoes.

(narrator) To better understand tornadoes, scientists like Yvette Richardson, with the help of the National Science Foundation, are on a quest to unravel the mysteries of tornadoes.

(Describer) She climbs out of a truck.

This will, hopefully, give us the knowledge we need to improve warnings, improve forecasts. To improve our general understanding of how something works, always arms us better.

(narrator) The project is called Vortex 2, but it could also be called The Amazing Chase.

(Describer) Satellite dishes and anemometers like weather vanes are among the equipment set up in a parking lot.

For five weeks in 2009 and again in 2010, one hundred researchers and scientists from 16 universities will deploy about 40 vehicles armed with high-tech equipment. They'll crisscross the Midwest in search of tornadoes. All to better understand how, when, and why they form.

We'll measure size distributions of precipitation inside storms. We're trying to determine the role that that might play in aiding tornado genesis. Set these down and wait for the storm to pass then do it all again. For hail, we both brought helmets and rain gear. Probably be getting pelted in the head a little bit.

(narrator) Vortex 2 will also examine the winds inside a tornado near ground level.

Lower levels are important because that's where we live. Those winds impact us and we have little knowledge of them.

(narrator) Unmanned aircraft will venture into the storms to measure winds, temperature, and moisture. Safety is a concern. Researchers are required to have an escape route for each storm they encounter. Then there's being away from home.

I'm bringing my mother over for five weeks...

It is rough on the family.

They're also very supportive because they understand we're involved in something that will benefit them and our community. It's a lot of support and love they give us. It's needed in the field.

(narrator) Researchers will often work 14-hour days or longer fueled by a common passion. A tornado is just air, but it's air that is amazingly

organized into this vortex that has such power. You really have to just step back and have great respect for the ability of nature to do something like that.

The project is called VORTEX2. For five weeks in the spring of 2009, and again in spring 2010, 100 researchers and scientists from 16 universities deployed about 40 vehicles armed with high tech equipment to measure and probe tornadoes and tornado development.