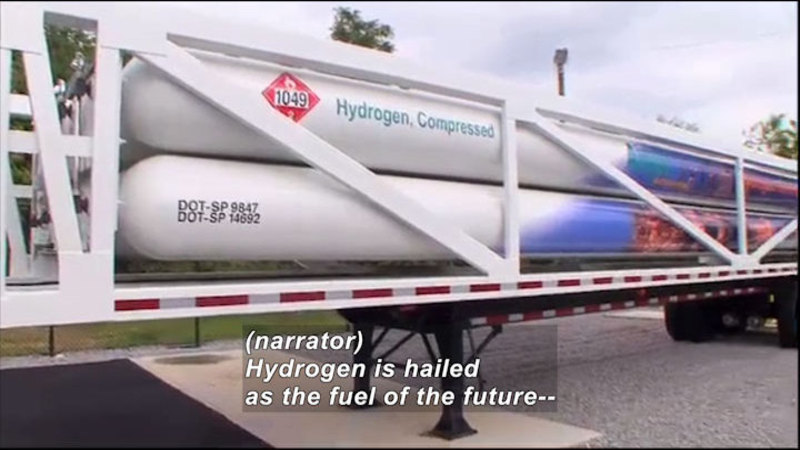 (Describer) Streams of light collide to create a globe filled with water. Title: Science Nation. A policeman drives a Segway, standing on a platform between two wheels.

(male narrator) Officer Tom McCloghry is a cop on the beat patrolling downtown Columbia, South Carolina, working to keep the streets safe. Though these days it's not unusual to see police on Segways, this one is different. It's a hydrogen hybrid.

(Describer) He takes out a cylinder.

(male) With the Segway and with the hydrogen cell, it keeps it nimble going around parking garages, down alleyways, and quietly...

with those that I have to interface with... and socially motivate them.

(Describer) The city skyline stands beyond a divided highway.

(narrator) In the last few years, Columbia has transformed itself into a hotbed of hydrogen research, thanks in large part to the Industry/University Cooperative Research Center for Fuel Cells at the University of South Carolina, funded by the National Science Foundation. What we're focused on specifically in this center

(narrator) Hydrogen is hailed as the fuel of the future-- plentiful and nonpolluting, discharging only water vapor into the environment. Perfecting the fuel cell, which converts hydrogen into a steady stream of electricity, will be one key to making prototype hydrogen vehicles like these commonplace.

(Describer) A car is driven.

(male) We're not tied to the barrel of petroleum. The long-term goal of the hydrogen economy and fuel cells in themselves, is to be completely renewable.

(narrator) That means developing ways to generate hydrogen using renewable sources, like wind and sunlight. Hydrogen in fuel cells allow us to store the energy when the sun's not shining and the wind's not blowing. It allows us to put that energy-- that renewable energy from sun and wind-- to work in our transportation sector.

(narrator) A cop on a hybrid Segway is one example of a city promoting the powerful potential of this technology.

(Describer) A man on a sidewalk waves.

Columbia's mayor, Bob Coble, sees hydrogen research at the university as a huge opportunity to create high-quality jobs in the community.

(Describer) He enters a building.

While we don't know exactly how it's gonna unfold and what technologies will be the primary technology in fifty years, we know there will be a green economy, a knowledge economy, and we better be part of it or we'll be left behind.

(narrator) To support the push to hydrogen, the City of Columbia, the university, and local business and industry, are coordinating to put these new hydrogen technologies to work around town.

(Describer) A baseball game is played.

Over at the Carolina Baseball Stadium, the scoreboard is partly run by a hydrogen fuel cell.

(Describer) By some trees...

The City Department of Homeland Security is testing this hydrogen generator that could be used during emergencies to power lights and computers for first responders.

(Describer) A bus is driven.

And this hydrogen bus will soon be zipping around town.

(male) It's part of getting it-- that there's a new and green economy out there. If you're not in the game, you're not going to be there in the fourth quarter to score the winning touchdown unless you've done the preparation on the front end.

(narrator) How far away are we from a hydrogen economy?

(male) There's more research to do on fuel cells. We have working fuel cell cars now. They're expensive, but the price will come down as we produce more of them.

(Describer) A car picks up speed.

(narrator) When that happens, he says, is up to us. It boils down to a few issues.

One, a real recognition that CO2 will be a problem for our children and that we want to do something about greenhouse gasses. Second, a recognition that sooner or later the price of gasoline's gonna be so expensive that we won't control it. We, as Americans, will now worry about filling up our gas tank.

Officer Tom McCloghry is a cop on the beat, patrolling downtown Columbia, South Carolina to keep the streets safe. And, though it's not so unusual these days to see police on Segways, this one is different. This is a hydrogen hybrid Segway, created with support from the National Science Foundation.