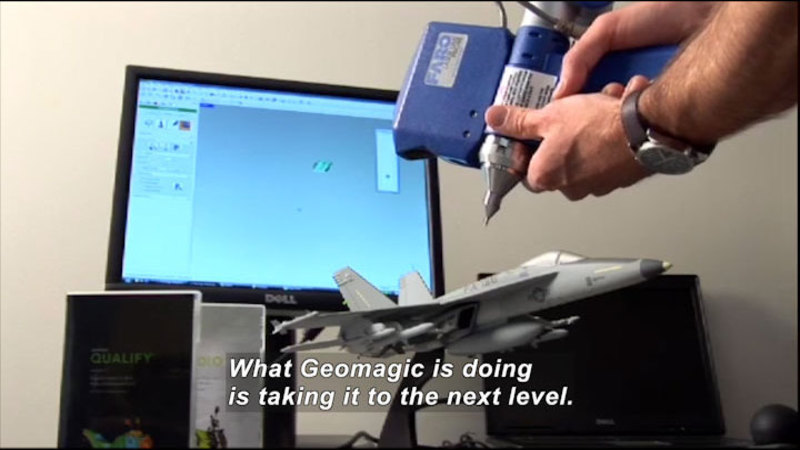 Once you digitize something, you can do a lot of manipulation, storing, editing, and sharing. What Geomagic is doing is taking it to the next level.

(male) As I move across the wing,

(Describer) As Kevin Scofield moves a scanning device over a model of a jet fighter, a 3D model appears on a monitor.

you see that the on-screen is actually following exactly what the camera inside the scanner sees.

(narrator) With a laptop and a laser scanner, engineer Kevin Scofield shows how the process begins. He's capturing the physical aspects of this F-18 fighter jet model.

(male) By touching a button--it's like spray-painting something-- the data comes in in real time. Once finished, you'll collect anywhere from a couple million to a billion points with some of the larger-scale objects that are scanned.

(narrator) Those points, like the one used on this motorcycle part, are converted to information that can be used in CAD/CAM, computer-aided design and manufacturing.

(male) Each of these regions was classified as a different type. Yellow means it's a cylinder. Green means it's a plane. The orange means it's an extrusion.

(narrator) If the physical object is properly mapped, a new part can be created, whether in a race car, the body, or a spacecraft. NASA uses the technology to identify Space Shuttle damage. Flying debris during liftoff can harm the orbiter's protective tiles. But since the Columbia accident, crews have used cameras to document any gouges or dents. On earth, a 3-D model of the damage is created so spacewalkers can use the proper tools to make potentially life-saving repairs. I wanted to grow up to be an astronaut.

The reason that NASA Space Shuttle application is so interesting to me, part of it is to fulfill my unrealized childhood dream.

She survived horrific ordeals growing up in China during Mao Zedong's cultural revolution. She and her sister could not go to school. Capitalism and intellectuals were condemned. She both witnessed and endured violence, brainwashing, and malnutrition.

(female) There were certain goodness, kindness, and caring things still in me. My uncle also, I think he anticipated things will come. So he taught me resilience.

(narrator) At age 23, she was thrown in prison. But instead of being executed, she was deported to the United States. I did not know I would become a businesswoman. Because when I was raised in China, I was brainwashed money was evil.

(narrator) She learned English, studied literature, and worked as a waitress before earning degrees in computer science. She created Geomagic in 1997 and navigated it through the dot.com bust.

In 2005, Inc. Magazine chose her Entrepeneur of the Year. She shared stages with former presidents. The National Science Foundation has awarded Geomagic several grants to improve technologies for product design and development. Geomagic software now is used widely to modernize manufacturing. Timberland uses it to design and make its shoes. The upgrade has reduced waste and gets new styles to market faster. After 9/11, Geomagic worked on a project to scan the Statue of Liberty. So if a terrorist attack destroyed the national treasure it could be rebuilt exactly.

(female) When the government called on us, we put our people on the project. Now they have all the engineering data and the wear and tear, the coloration.

(narrator) Software sometimes inspires unusual applications. Soccer is huge in Europe. For the Euro 2008 games, some of the best players had their head's scanned. A huddle of their 56-foot likenesses mesmerized visitors to Zurich's Central Train Station.

(female) I believe design and manufacturing is a country's economic backbone. Build more things we want and less of what we don't. People call me visionary. I don't think I'm a visionary. I think I'm good at linking real-world applications with invention and innovation.

Geomagic is an industry leader in the technology called digital shape sampling and processing, or DSSP, created with support from the National Science Foundation. It starts with scanning an object, from a race car to a human body, with optical beams. A camera inside the scanner transmits millions up to a billion points to a computer. Many business and government agencies use the technology in product design and safety measures.