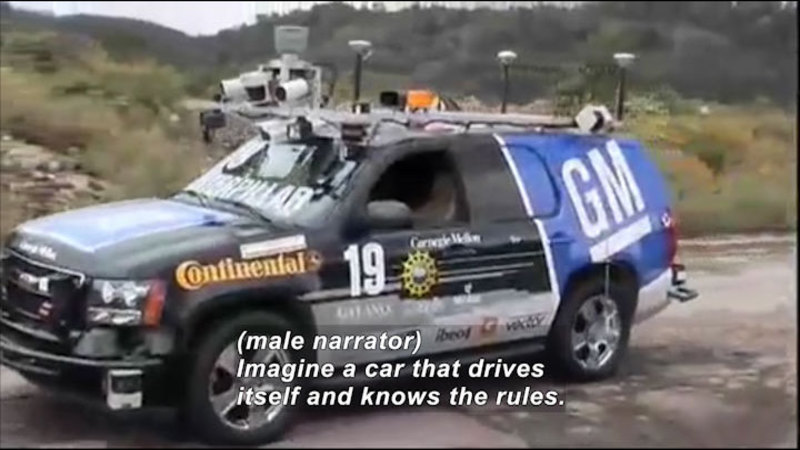 (Describer) Streams of light collide to create a globe filled with water. Title: Science Nation. A moving SUV has no one inside it.

(male narrator) Imagine a car that drives itself and knows the rules. Sound far-fetched? Not for the robot wizards at Carnegie Mellon University. They call this car with a brain, "Boss."

(Describer) On a sidewalk...

(narrator) The Boss is probably a better driver than us. Students built it for a Pentagon competition called the DARPA Urban Challenge. It plied its way through a simulated urban environment without so much as a dinged fender. It was the undisputed champion in 2007.

(Describer) A man opens the back hatch, revealing cables and equipment.

But the team didn't stop there. Their leader, electrical and computer engineer Raj Rajkumar, has led them down the road to a more precise, refined navigation system. They're supported by corporate sponsors and the National Science Foundation.

(male) It's constantly using its lasers, radars, and cameras to see what is going on. "It's my turn, but I see somebody else coming in." It says, "I'm stopping."

(narrator) The latest challenge is programming Boss to valet park. Rajkumar predicts that in as little as ten years this automotive marvel could replace human drivers on the road. The truth is, more and more Americans are paying less and less attention when they're driving. They're texting, talking, putting on makeup, shaving, reading a newspaper, or they're talking to a camera. It can be a killer. In 2008, 6,000 people died on U.S. highways because of distracted driving accidents. Another half million were injured. But will human drivers willingly take a back seat? For some, not so much.

(narrator) Others say, "Bring it on." Oh, that'd be wonderful. Sounds like a good idea. It'd cut down on drunk driving.

(male) You just sit back and relax, check news, email, or even take a nap.

(narrator) And leave the driving to Boss.

Meet Boss – the car that can drive itself. Boss is the invention of Carnegie Mellon researcher Raj Rajkumar and his team. It has 18 sensors, including a three dimensional laser and onboard computers that connect to GPS and mapping software. When it comes to knowing the rules of the road, Boss rarely makes a mistake. With support from the National Science Foundation, it was built for a Department of Defense competition called the DARPA Urban Challenge. Boss negotiated the roads, including traffic, and was the hands down winner in 2007.