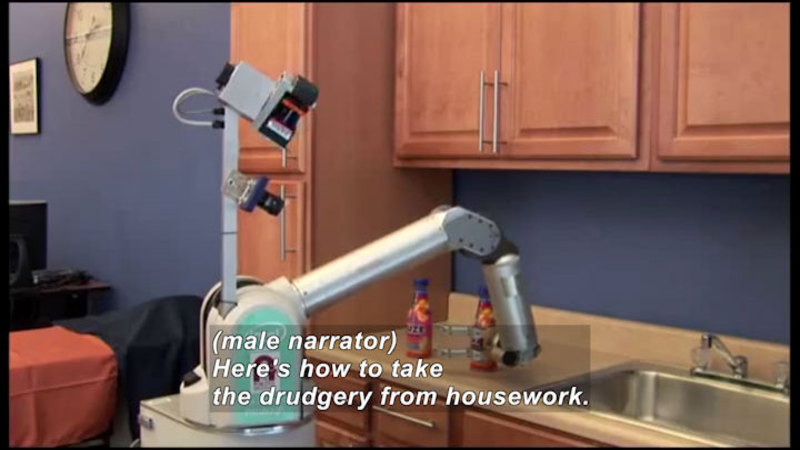 (Describer) Streams of light collide to create a globe filled with water. Title: Science Nation. A robot moves its three-fingered arm toward a bottle on a counter.

(male narrator) Here's how to take the drudgery from housework. Meet Herb, a robot butler who doesn't mind the mundane one bit.

(Describer) It drops the bottle in a bin.

We want Herb to perform useful tasks at home with minimum delays.

(narrator) That's Siddhartha Srinivasa of Intel Labs, Pittsburgh. That's where they cooked up Herb, which stands for Home Exploring Robotic Butler. What do you think, ladies?

There are many chores a robot might do. Particularly for older people. You get arthritis in your hands. It would be a helpful thing. I'd like him to do my laundry and get my mail. I use a cane. I could lean on the robot. The researchers believe senior citizens and the disabled will be the early adopters of these robot butlers. They most need the help with the housework. Let's face it-- don't we all want a robot? And we want one that is smart and resourceful. So with help from the National Science Foundation, the researchers are showing Herb the ropes, hoping he can operate on his own. He moves around on a Segway, those stand-and-ride scooters. He has an arm to pick up objects, a camera to see, and a spinning laser that maps a 3D model of his location.

(male) That screen is Herb's hallucination of the world. Herb thinks the world looks like that.

(narrator) Teaching a robot to pick up bottles is hard.

(male) Hey, it went upside down.

(Describer) It drops a bottle.

(narrator) Srinivasa is optimistic that in about ten years a robot butler will be able to serve coffee to these ladies. I'd like him to go shopping for me. He can carry all the packages. A robot could be a companion too. I want him to be good-looking, handsome.

(narrator) Okay, we hear you-- one silicon stud who's handy with a dust mop coming right up. But by all means, please don't tell Herb he's homely.

His name is HERB (Home Exploring Robot Butler) and he’s a robotic butler designed to open doors, clean tables, and even retrieve slippers. He doesn't look as human as his Japanese counterparts, but HERB has a bigger brain according to its developer Siddhartha Srinivasa at Intel Labs located on the campus of Carnegie Mellon University. With funding from the National Science Foundation, HERB is being programmed to think and function on its own and to navigate unknown environments.