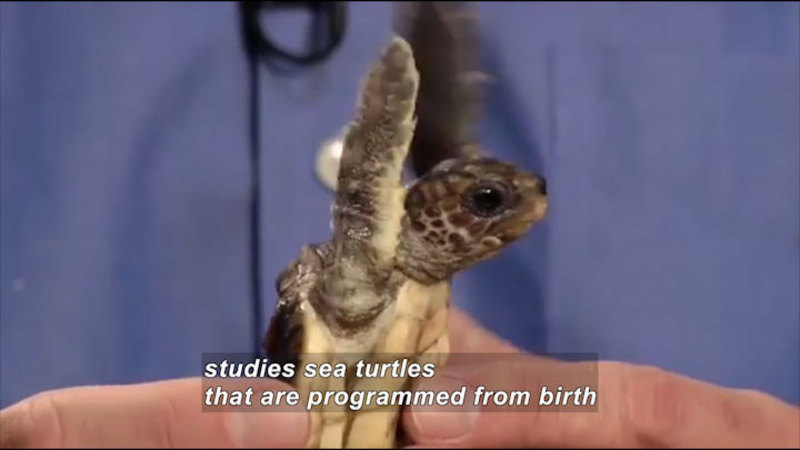 (Describer) Streams of light collide to create a globe filled with water. Title: Science Nation. A man takes a small turtle out of an enclosure.

(male narrator) It's time for this loggerhead turtle to go to work.

(male) We can tether turtles in these little cloth harnesses, put them into this tank, and they'll swim in place. University of North Carolina biologist Ken Lohmann studies sea turtles that are programmed from birth for an extraordinary journey.

(male) The mother turtles bury the eggs on the beach

and return to the sea. The eggs hatch about 50 to 60 days later. With support from the National Science Foundation, Lohmann is learning how these reptiles use the earth's magnetic field to navigate a five- to ten-year journey around the Atlantic Ocean.

(male) The turtles seem to inherit a set of responses that tell them what to do when they encounter specific magnetic fields at particular locations. This animal magnetism can be a life saver. One field off Portugal triggers the turtles to turn south. If they don't, they'll likely die, swept into frigid North Atlantic waters. In one lab test, turtles responded to magnetic fields similar to what they would encounter off the coast of Florida. The great majority of them turned southeast. This is an exciting finding because southeasterly orientation in this part of the world would presumably take turtles further into the Gulf Stream. So the turtles actually have what might be considered a crude global positioning system that is based on the earth's magnetic field.

(narrator) Check out this experiment.

(Describer) A turtle in a harness is moved like on a backwards ferris wheel.

These turtle moves may look odd.

(male) The turtles will act out their swimming behavior in air.

(male) Swimming into waves is a highly reliable trick that the turtles use to guide themselves offshore.

(narrator) I guess you could call it TPS-- the turtle positioning system. While humans spend hundreds of dollars for these devices that tell us where in the world we are, the turtles just know.

(Describer) ...on a smartphone.

Understanding how that works will help us protect the species. The question is how to help them get out of their shell. For Science Nation, I'm Miles O'Brien.

Sea turtles, salmon, and sharks sometimes travel the width of the ocean to return to their "breeding ground" to reproduce. With funding from the National Science Foundation, Biologist Ken Lohmann at the University of North Carolina -Chapel Hill studies the role magnetic fields play in these long distance migrations. In his lab he's done behavioral studies, manipulating environmental cues to see how young turtles respond to even small changes in magnetic fields.