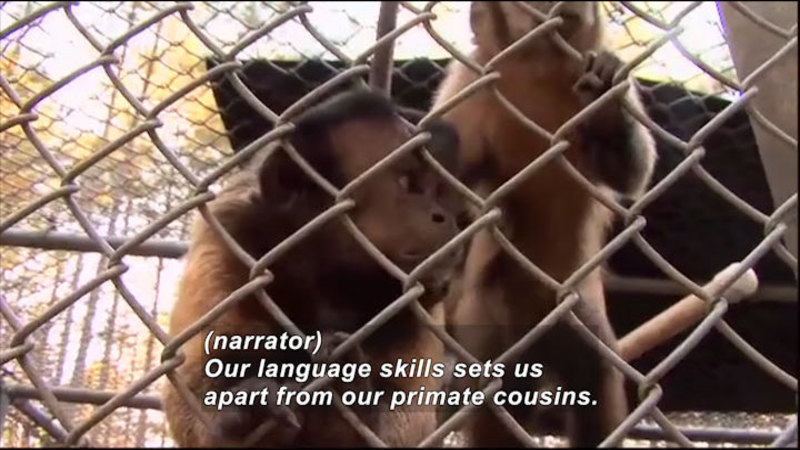 (Describer) Streams of light collide to create a globe filled with water. Title: Science Nation. A woman gives a cucumber slice to a monkey in a cage beside another monkey.

(male narrator) Logan knows when he's been handed a raw deal. He and Liam, the monkey next to him, just did the exact same trick, and Liam got a grape. Any monkey knows grapes are more prized than that boring, old cucumber slice he received.

(Describer) He throws it out.

They're happy with cucumbers until their partner gets grapes.

(narrator) We humans may not get uptight over cucumbers or grapes as our monkey cousins, but we do share an innate sense of fair play. With support from the National Science Foundation, psychologist Sarah Brosnan and her team at Georgia State University and Chapman University are trying to see if cooperation is baked into our DNA as well. We need everyone to click on the green start button. To test the notion, Brosnan has created games for humans and monkeys to play.

(Describer) The humans are in cubicles, the monkeys in cages.

(female) In this game, called The Assurance Game, individuals do best if they cooperate.

(narrator) No instructions are given on how to play the games. Players are paired with a team member. Sometimes they see them, sometimes not. If each team member chooses the red square, both win big. Monkeys win tasty treats. Students get cash. You get a dollar apiece for red and red. The more we worked together, the more money we got.

(narrator) If they can't get together, they get little or nothing. Monkeys and humans cooperated about 70% to 80% of the time. That suggests that cooperation behavior runs deep in the nature of primates. The only time humans outscored monkeys was when they employed our key advantage. Everyone who talked about the game figured out the cooperative interaction.

(narrator) Our language skills sets us apart from our primate cousins. Which is probably what's allowed humans to develop really complex cooperative enterprises like economies and nation states that other species haven't been able to do.

Sarah Brosnan, a psychologist and neuroscientist at Georgia State, has released a study helping to prove that primates share similar feelings of inequity as humans, and she will extend the research with a five year National Science Foundation grant. In the next round of research Brosnan will work with Bart Wilson at Chapman University to do similar hands-on and computer game-like experiments on both humans and primates. The idea is to better understand how economic decision making strategies evolved and which if any are uniquely human.