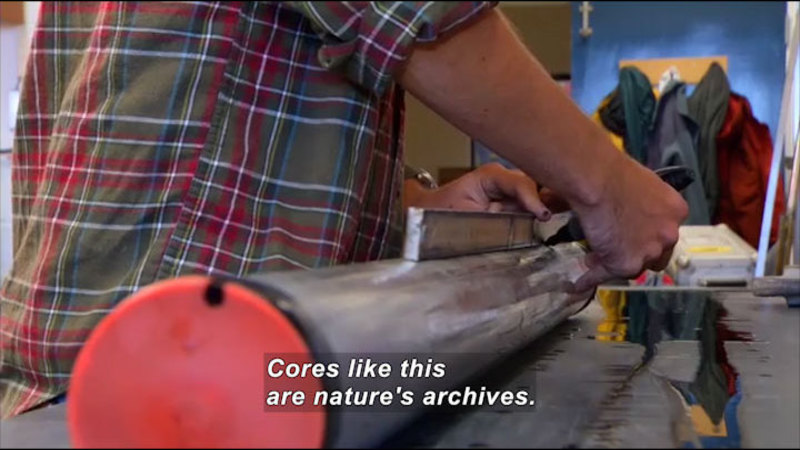 (Describer) Wind and rain batter trees in a storm.

(male narrator) We know a lot about hurricanes-- how they're born, how they grow, where they go, and who should flee, mostly thanks to technology that keeps our eyes on the sky. Jeff Donnelly is a hurricane hunter who happens to be a geologist, so he is looking the other way. We're able to determine hurricane activity by taking long core samples and looking at deposits that were washed in during hurricane events.

(Describer) He walks through a marsh with two other people.

(narrator) With help from the National Science Foundation, Donnelly is auguring into this Cape Cod marsh to see what happened here in the "B.M." era. That's "before meteorologists," way before. Cores like this are nature's archives. You just have to know how to read them,

(Describer) A long cylinder packed with soil is opened.

which Donnelly does in his lab at the Woods Hole Oceanographic Institute.

(Donnelly) We stood on this grass when we took the core.

(Describer) The core is sliced lengthwise.

Moving down, we're moving back through time. You get this light layer at 40 centimeters, and you can feel all the coarse grains of sand transported from the beach to the marsh during the storm. It probably dates to the early 1800s or late 1700s. Then as we go further back down the core, there's a light layer here-- it's about 800, 900 years ago. You can feel sand in it as well, providing evidence of a storm we knew nothing about before we started doing this work.

(Describer) Gulls take off from a beach.

Donnelly is also exploring the link between climate change and hurricanes. Does a warmer planet with warmer oceans mean the big storms will get more intense? The jury is still out. What's gonna happen in the next 100 years is a question, but it's clear that climate change can modulate hurricane activity. We're clearly influencing climate. How we're influence hurricane activity remains to be seen.

(narrator) That's getting to the issue's core. This well-grounded research way back in time may help tell us what trouble may be brewing for us in the future.

When Geologist Jeff Donnelly of the Woods Hole Oceanographic Institution (WHOI) hunts for hurricanes, he does it safely at ground level, or just slightly below. He is even able to do it without having to encounter so much as a drop of rain or a gust of wind. With funding from the National Science Foundation, Donnelly leads a team that studies long term global hurricane patterns. They’ve unearthed some interesting findings about past hurricane activity which might provide a hint about what to expect in the future.