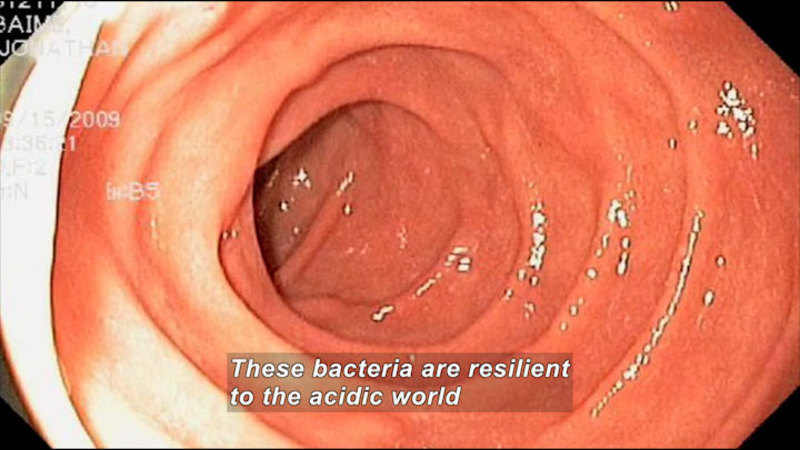 (Describer) In an old film, a man grimaces in pain and holds onto a coat.

(male narrator) It looks like grade-B science fiction, but this 50-year-old film was made to lay out the facts on ulcers. Those stomach pains that you talk about, the gnawing and the burning, those are obvious symptoms of gastric ulcer.

(narrator) Back then, contracting a stomach ulcer was thought to be as much an emotional ailment as physical. You've stewed yourself into a duodenal ulcer. Every little upset pumps more hydrochloric acid into the stomach to eat holes in the lining.

(narrator) But there are holes in this film's plot. Turns out the villain here wasn't stress, but something else discovered by scientists in the 1980s.

(male) The glaring thing missing from that was H. pylori, these small curved bacteria in ulcer patients' stomachs.

Although people didn't realize or believe it at the time, that turned out to be a huge breakthrough.

(narrator) With support from the National Science Foundation, Boston University biophysicists Jonathan Celli and Rama Bansil have been studying the real culprit of ulcers, H. pylori bacteria. These bacteria are resilient to the acidic world of the human stomach because they're able to neutralize the acid around them. The stomach is lined with a mucosal gel to protect it from the acid. Without that gel, your stomach would digest itself. H. pylori is faced with the challenge of moving through this gel so it can attach to the stomach lining.

(narrator) They found the same process that protects H. pylori from stomach acid also turns the gel lining into a liquid solution, and that bacteria can swim on through. If you know the exact physiological conditions under which H. pylori attacks the stomach,

then you can work to design drugs which counteract those conditions.

There's nothing too mysterious about it, really.

(narrator) Yes, there is. While H. pylori is found in over half the world's population, far fewer people ever develop ulcers like this. Sequel anyone? Finding a new doctor sounds like a better answer to me.

Stomach ulcers affect nearly four million American's every year. So, what causes them, and how are they treated? With funding from the National Science Foundation, researchers at Boston University are uncovering the mysteries of how H. pylori bacteria is able to survive and thrive in the acidic world of the human stomach.