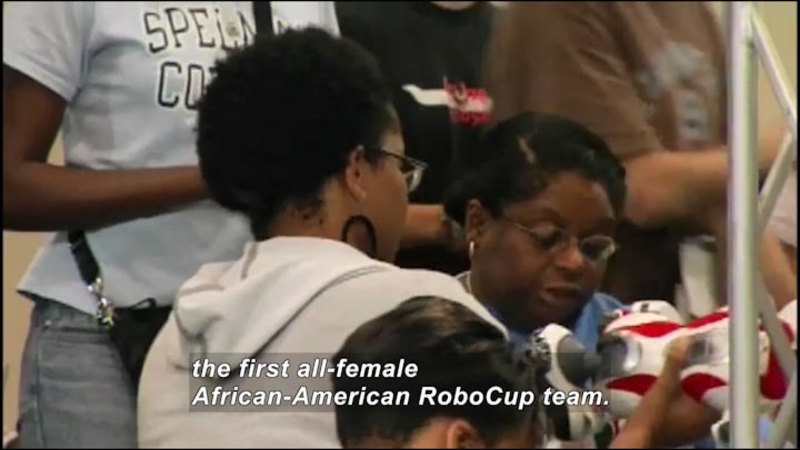 (Describer) Streams of light collide to create a globe filled with water. Title: Science Nation. A robot with arms and legs steps with its back to a ball.

(male narrator) When dealing with robots, sometimes you've got to be patient.

(Describer) The robot kicks it.

Thank for coming to our SpelBots Club meeting.

(narrator) Computer scientist Andrew Williams is founder of the SpelBots, the first all-female African-American RoboCup team. Their patience and hard work has paid off in international competitions.

(Describer) A four-legged robot kicks a ball into a goal.

(narrator) On the Spelman College campus, they're rock stars. They recognize our face.

They say, "Oh, you're the SpelBots captain," or "You're on SpelBots, doing the robotics thing."

(narrator) Jazmine Miller and Jonecia Keels are co-captains of the team at this historically black college in Atlanta. I find working at an all women's college,

there tends to be more of the social side of teamwork, basically. There's a big emphasis on collaboration, creativity, social aspects of engineering, computer science.

(Describer) The two-legged robot kicks a ball, which hits the post of a goal.

(narrator) With help from the National Science Foundation, Williams is bringing engineering and robotics challenges to young women in this still male-dominated field.

(Keels) A big reason why there's not many women in computer science is intimidation.

My first semester here, that really gave me encouragement, and empowered me so much, my confidence is out the roof.

(narrator) SpelBots have competed at contests in Europe and Asia, with teams from more than 30 countries.

(Jazmine Miller) I really love travelling with SpelBots because I feel I am literally tearing apart the stereotypes about computer scientists or roboticists.

(narrator) For them, technology has endless possibilities.

(Miller) I see robotics as a way to put everything I studied on computer science to practical terms. Instead of seeing something on my computer on code,

it's there, moving, and reacting.

(narrator) This bot named Charles really moves to the beat. The SpelBots programmed each motor, camera, and gyroscope.

Who knew such hard work could be so much fun?

RoboCup is the Olympics of college-level robotics and artificial intelligence contests. As teams gear up for the next round of competition, the “SpelBots” have positioned themselves as the team to beat. That’s the team from Spelman College, a historically black liberal arts college for women in Atlanta. They tied for first place globally in the humanoid soccer championship in Osaka, Japan in 2009, just four year after becoming the first all-women, African American team to enter the competition.