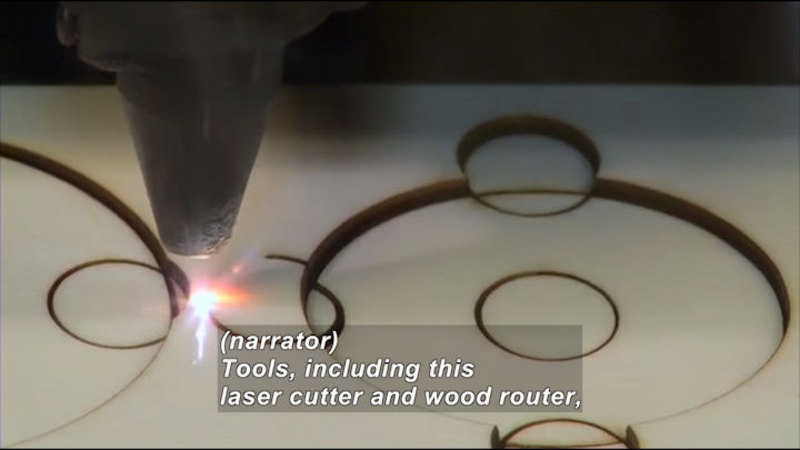 (male narrator) Explore the Center for Bits and Atoms at MIT, and you'll notice there's quite a bit of everything lying around.

It's a tight fit, but among the clutter, is a small workshop. The tools surrounding us let us make really anything

on any length scale.

(narrator) Tools, including this laser cutter and wood router, make up what center director Neil Gershenfeld calls a fabrication laboratory, or fab lab for short. Fab labs were designed to meet whatever challenge

you, as a local community or a person, needed to meet.

(narrator) In a Ghana village, circuit boards were in short supply, so kids there made some. In Norway, herders were tired of losing sheep, so they created these tracking devices.

(narrator) At MIT they are making parts for a wireless communication network in Afghanistan. To operate a fab lab, you create a design on computer software, then having the computer tell the lab's tools what to do with materials you provide. This is the experiment I described.

(Describer) A woman discusses something on paper with Gershenfeld.

(narrator) Gershenfeld studies taking things from the computer world and bringing them into the physical world. Fab labs are an offshoot of that.

(Lassiter) To take a slice of what we do and distribute it, and see if people had the ability and access to tools to make anything, what would they do?

(narrator) With help from the National Science Foundation, his team spearheaded an outreach program.

(Gershenfeld) We opened just one of them, but it unleashed a viral explosion that we've been chasing to keep up with ever since.

(narrator) The total cost of all equipment runs around fifty grand.

(Lassiter) It's unaffordable for an individual, but it's accessible for a school or community.

(narrator) The response from users?

(Lassiter) Leaving that laboratory having made something of your own design, you'll keep coming back, and that's what's so wonderful about it.

With help from the National Science Foundation, physicists at MIT have created 35 “Fab Labs.” They can bring relatively sophisticated design and manufacturing capability to people around the world with four simply tools. At last count, they were in use on three different continents, helping to create everything from critical infrastructure to simple art work.