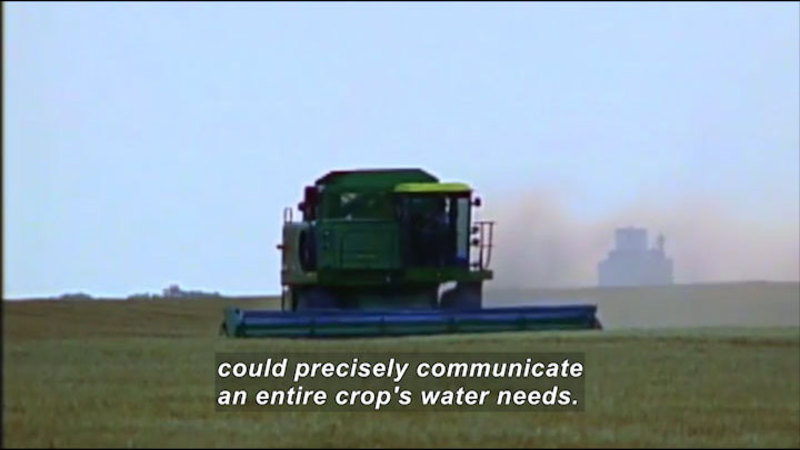 (Describer) Streams of light collide to create a globe filled with water. Title: Science Nation. A man clips something onto the leaf of a plant.

Here's a leaf sensor. You can put this on any leaf.

(male narrator) Okay, geranium, call if you need anything.

(narrator) How much water could be saved if plants let us know when they are thirsty? With this leaf sensor, it's possible to find out.

(male) You will get what we call the water-deficit stress reading.

(narrator) AgriHouse, a Colorado agriculture and biotech company, developed this sensor with help from the National Science Foundation. Here's how it works. When the plant starts drying out, the leaf contracts. That change can be measured in electrical voltage. One device every 20 or 30 acres could precisely communicate an entire crop's water needs.

You can use that information to turn on and off the irrigation equipment. And that's the ultimate goal.

(Stoner) They wanted a device for going to Mars, where the astronaut would have to spend over 70 to 80 percent of their waking hours farming. They need devices that would be in the greenhouses on Mars that would free up their time.

(narrator) But Stoner's team realized there may be immediate benefits on this planet. The leaf sensor could pay off for farmers and greenhouse owners. The Department of Agriculture tested the sensors on a Colorado research farm, irrigating only when plants called for it-- reduced water usage by 25 percent.

(Stoner) The plants said, "I don't need much water." In Colorado, it could be as much as $100 million in savings to farmers.

(narrator) Wired sensors work on any crop or houseplant. And Engineering students from the University of Colorado are now testing a wireless version. The end user can plug in, get a wireless signal sent to it,

and get instant feedback on what needs to be done.

(narrator) With almost 70 percent of earth's fresh water going to agriculture, we could help conserve an increasingly precious resource by irrigating only when crops really need it.

It started as a project for long term space survival, when NASA estimated that crews headed to or living on Mars would spend 80% of their waking hours farming. But, with support from the National Science Foundation, research into a leaf sensor that could “call in” with its vital statistics morphed into technology that can help farmers on this planet. The goal is to save water by directly measuring a plant’s moisture level.