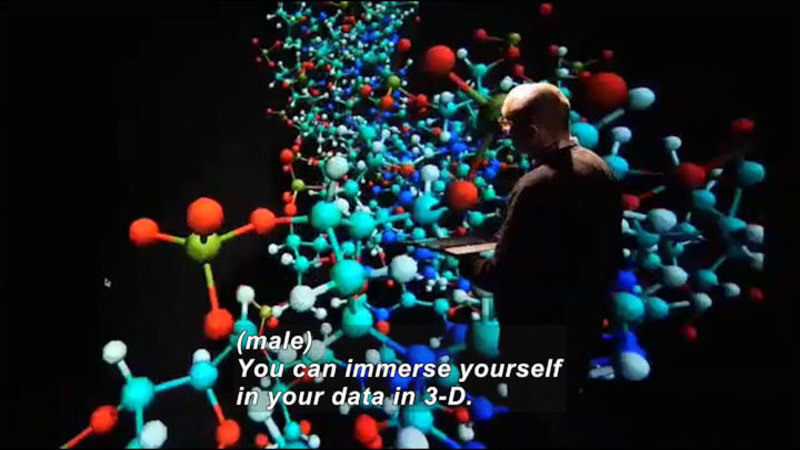 (male narrator) Some walls can be windows into a world we can hardly imagine-- the exquisite details of the stonemason's craft, the mind-bending world of fractals, where the shapes may shrink, but they're all the same. Or the blueprint of what we're made of, a strand of DNA.

(male) You can immerse yourself in your data in 3-D. This software and movies will have 3-D capabilities.

(Describer) 3D glasses are lowered over a view of strands threading between each other.

(narrator) in this case, a churning twister. Eat your heart out, Hollywood. You can attempt describing the birth of tornado in words, but having a very powerful 3-D animation,

I mean, the images speak for themselves.

(narrator) Measuring 14 by 8 feet, this video behemoth is known as the VisWall. You can't get it at Best Buy. You must visit to Tufts University at the Center for Scientific Visualization. With support from the National Science Foundation, Lionel Zupan helped bring the VisWall to life. The VisWall uses two rear-screen projectors to display a picture four times the resolution of the best HD TV-- four times! Faculty and students from many disciplines use it. For example, a surgeon developed software so her students can practice their technique without cutting any tissue.

(Describer) He moves a pen.

(Zupan) I can feel the texture, but I can't change instruments. Here, I can actually cut. I'm attempting to grab the tumor.

(narrator) Mathematician Boris Hasselblatt went to the wall to view a model that forecasts the population growth of certain animals. Although he has studied this for 20 years, when he bounced things off the wall, he saw something he had never seen before. What's apparent at this scale with this resolution and detail, and being at eye height as well, is that all the curves meet right here.

(narrator) Turns out those curves indicate chaotic conditions. That's one of the great things about this wall. It will get people to see things that are otherwise hard to see.

(narrator) These simulations and animations are just scratching the wall's surface. Imagine what it will be like when we can get one of these at home.

A giant video screen that takes up an entire wall, floor to ceiling, is allowing scientists to see details they've never seen before. Developed at Tufts University with help from the National Science Foundation, the Visualization Wall has a variety of applications. The "VisWall" offers a surgeon the opportunity to teach and practice surgical procedures on avatar renditions of the human body.