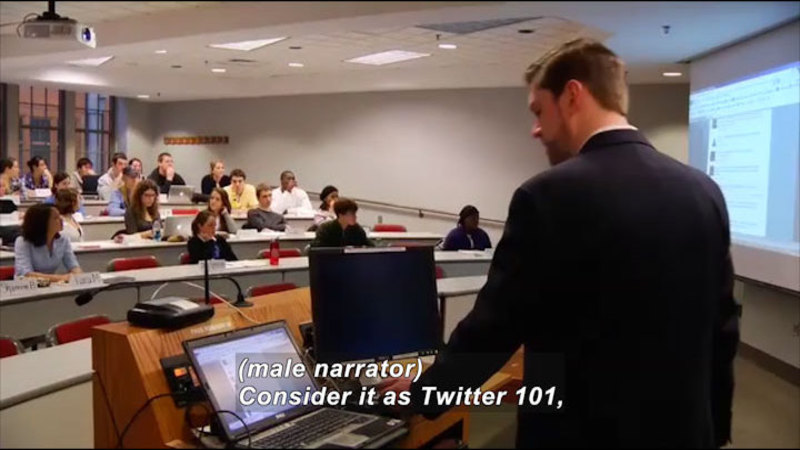 (Describer) A professor speaks in a lecture hall.

(male narrator) Consider it as Twitter 101, a class in all things social media--not just Tweeting, but Facebook, blogging, wikis, and the like. It's happening at Boston College, where they're trying to understand on this online explosion. I started using Twitter for this class. I started on Facebook, so I grew more familiar with it. But Twitter is definitely picking up. I didn't have Twitter until I enrolled. Twitter's grown on me.

(narrator) To parents, this is no surprise: three-quarters of teenagers who are online are plugged into social networks. And e-mail? Forget about it. It's not a student-to-student thing, unless you're contacting someone for organizational reasons. I prefer Facebook for communicating with friends.

(narrator) The class teaches when tweets are better than blogs and why wikis work.

(male) A wiki puts that document in one place and then everybody can edit it simultaneously. So rather than passing it around, here's a tool that cuts through that.

These tools can change people's interactions and collaborations with one another.

(Kane) These projects are a wiki page.

The extent you meet face-to-face is up to you.

(narrator) With support from the National Science Foundation, Gerald Kane is studying the impact and uses of social media in education and the workplace. One company he's focused on is Sermo, a social network for doctors.

(male) We're the largest online physician community. Daily, tens of thousands of physicians share information with each other.

(narrator) Kane says social networks undermine corporate hierarchies, giving employees and customers a soapbox, a virtual unfiltered megaphone to millions. These things are happening whether the organizations or managers like it or not.

(narrator) So, many companies have decided to join 'em, otherwise they're left out of the conversation. Kane hopes to devise computer simulations to help organizations take better advantage of social networking applications.

(Kane) It's inevitable. It will happen. It's up to corporations and government agencies to decide whether to be leaders or followers here.

What are the benefits of social networks? Boston College Professor Jerry Kane has received a National Science Foundation career award to study the use of social media technology in the classroom and in business.