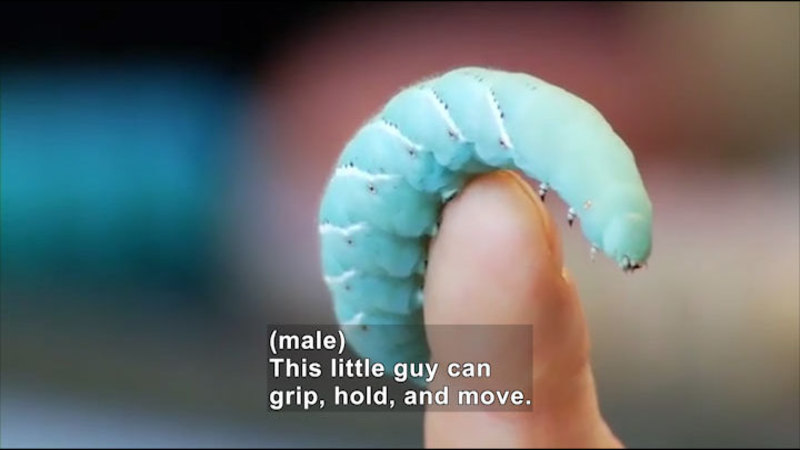 (Describer) Streams of light collide to create a globe filled with water. Title: Science Nation. A blue-green caterpillar curves over a fingertip.

(male narrator) Sometimes it pays to be spineless. Take the caterpillar-- it can squirm and crawl in ways that would make a contortionist green with envy.

(male) This little guy can grip, hold, and move. We try to make devices that can do this.

(narrator) He's talking about a robotic tobacco hornworm caterpillar. Already, Biologist Barry Trimmer and his team at Tufts University have molded plastic models to simulate the caterpillar's movements. With support from the National Science Foundation, these guys could be the nucleus of a new field of robotics.

(Trimmer) What we call soft material robotics. This doesn't really exist as a discipline currently, but we're rapidly moving towards that.

(narrator) Imagine small, squishy robots that could be dropped into tall trees to survey the forest canopy, or flown into space to monitor equipment onboard the space station.

(Trimmer) It can burrow, it can climb, it can navigate through complex terrain.

(Trimmer) Instead, you have a body that can perform most tasks itself. We're trying to understand how the nervous system and the body work together to create those complex movements. And that could be really interesting, because if you don't have a rigid skeleton or bones, you can move in ways that stiff animals can't.

(narrator) To make a robot patterned on a caterpillar, Trimmer's team studies every aspect, down to the DNA.

(Trimmer) This is a newly-hatched larva.

(Describer) ...much smaller than a thumbnail.

We've worked with them for 20 years, and I still find the transformation from a caterpillar to the moth to be incredible.

(Describer) The moth it becomes is larger and brown.

It's all in one genome. It's like reprogramming a battleship, taking its blueprint and building a 747 jet.

(narrator) Trimmer hopes that within a decade a small squishy robot will be safe enough to swallow, if you dare, to help diagnose diseases or deliver medications. Amazing how the worm might turn.

It's likely one day there will be robots crawling around that look a lot like caterpillars. With funding from the National Science Foundation, Tufts Biology Professor Barry Trimmer is researching the neuromechanics of caterpillars. The applications for this research include the development of soft-bodied robots for use in medicine, environmental safety, industry, and defense.