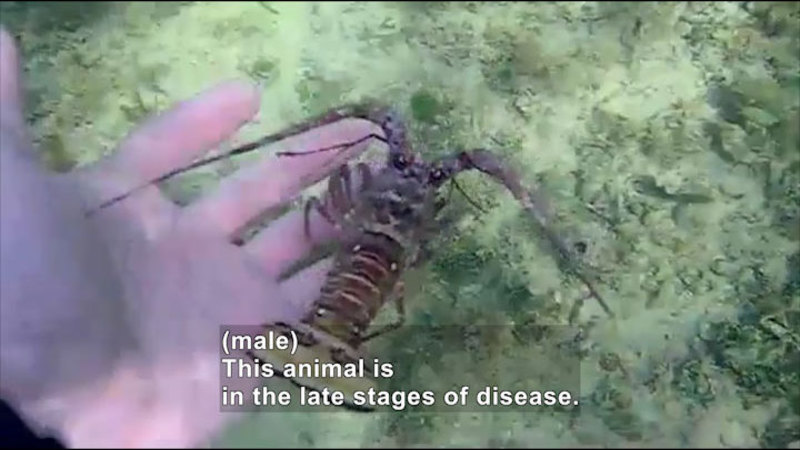 (Describer) Streams of light collide to create a globe filled with water. Title: Science Nation. A grey and brown lobster slowly crawls on an ocean floor.

(male narrator) If you know lobsters, you know this one isn't well.

(male) This animal is in the late stages of disease. It moves slowly, lethargically. A healthy lobster would never sit in your hand.

(Describer) One shakes in a net.

(Behringer) We ultimately discovered the first virus for any lobster in the world.

(Behringer) This an infected lobster-- the reddish one, and that's a non-infected. Oftentimes they'll take on this pinkish cooked color.

(narrator) Infected animals stop molting, stop eating, and die. The spiny lobster is a staple of the Caribbean seafood industry. With help from the National Science Foundation, Behringer is trying to determine how this lethal PaV1 virus spreads. It can spread via contact, and in the smallest juveniles it can be transmitted through the water column.

(narrator) The virus, harmless to humans, may spread another way. Lobsters spend six to eight months as larvae, often floating hundreds of miles in the open ocean.

(Behringer) It's that larval stage connecting all these Caribbean locations, literally taking it from the adults, and into the juveniles, which are the most susceptible population.

(Describer) To an assistant...

You set up the barrier, I'll get a lobster out.

(narrator) Lab tests reveal another curiosity. Lobsters may have disease detectors that keep some of them from getting sick. They can smell one another, food, and we think they can probably smell disease. They can do so before that diseased lobster can cause infection.

(narrator) In this University of Florida experiment, one path has water from a tank with a sick animal, the other a healthy one.

(Behringer) It appears that, as hypothesized, they are avoiding the scent of a diseased lobster.

(Behringer) Our motivation is to ensure their efforts are sustainable for them, for the creature, for the ecosystem.

(narrator) Behringer hopes by learning more about this disease it can be managed, and the population of these delicacies of the deep won't go into a tailspin.

The Caribbean Spiny Lobster has been a mainstay of Florida’s seafood industry for decades, but the harvest went off a cliff about a decade ago, declining about 30%, and has never rebounded. Biologists think the culprit is a virus called PaV1. University of Florida Ecologist Don Behringer wants to know how this pathogen has spread so far and so fast.