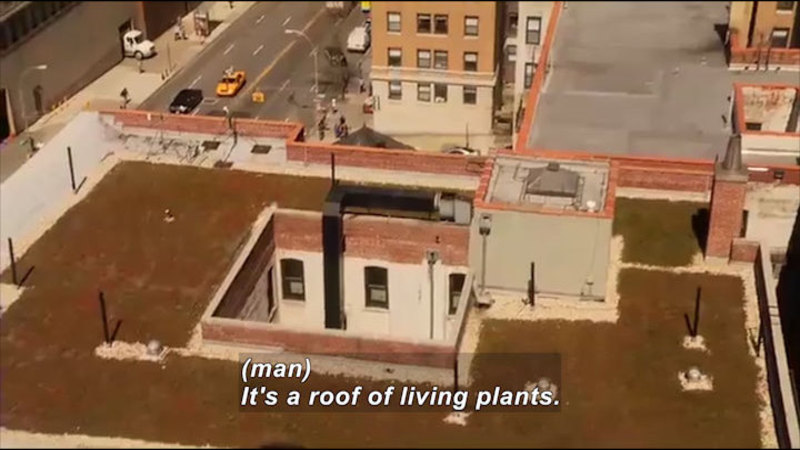 (male narrator) The rooftops of Manhattan are as varied as the city itself. Ventilation systems and water towers are pretty commonplace, but something else is taking root up here.

(man) It's a roof of living plants. And it's a new form of urban vegetation.

(Describer) A man walks on a green roof.

(narrator) Columbia University climate scientist Stuart Gaffin is a man of green gables. He's on a green roof topped off with layers of material for drainage and a chemical substrate, lighter than soil, that supports plant growth. We are just really discovering them in the United States and their versatility. I don't do any weeding.

(narrator) With help from the National Science Foundation, Gaffin and his team at Columbia are finding that green roofs have a beneficial effect on harsh urban environments.

(Gaffin) Starting with temperature, plants stay cool in sunlight effectively. The temperature differences between black and green roofs are astonishing. I've seen them reach 180 degrees. But on a green roof, the plants are similar temperature as the air.

(narrator) In summer, city concrete absorbs and stores heat. Gaffin believes enough green roof space could counteract that with a cooling effect. Then, he says, there are water benefits.

(Gaffin) With typical rainfall, a wave of water from all over hits our sewer system, which can't handle it, and actually triggers pollution events in rivers.

(narrator) After a rainfall, green roofs soak up all the water hitting them.

(narrator) In the lab at Columbia University, civil engineer and project lead Patricia Culligan is working to make green roofs greener by growing vegetation in waste materials, like this pulp from paper manufacturing. It's lightweight, so it offers a promising alternative to the current media that are used.

(narrator) If green roofs flourish, as these researchers hope, they may have planted the seeds of a revolution worth shouting about from the rooftops.

These days it seems everything is going green including roofs. With funding from the National Science Foundation, Patricia Culligan of Columbia University is studying green roofs, from their effects on storm water runoff and carbon dioxide absorption to claims they impact local climate and save energy.