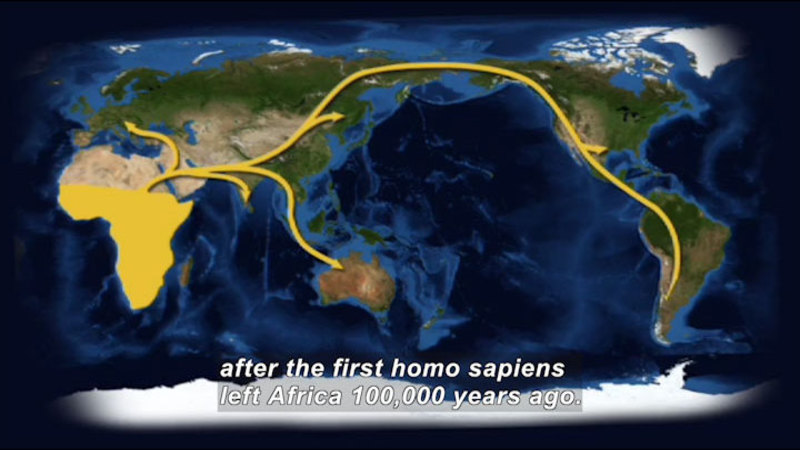 (Describer) Streams of light collide to create a globe filled with water. Title: Science Nation. An insect crawling from a thin sac is shown on a monitor.

(male narrator) You might think lice are not so nice. It's pretty cool. I love seeing these guys. They're amazing. They're so fast, it's hard keeping up with them.

(narrator) But they're now helping scientists scratch the surface of some big scientific mysteries.

People have been studying human migration patterns for many decades based on fossils and molecular data like DNA sequences. But recently, we're looking at parasites that live on humans. This is a louse that's emerging from an egg casing. It's remarkable.

(narrator) With help from the National Science Foundation, mammalogist David Reed studies human migration at the Florida Museum of Natural History. He collects lice DNA from around the world to trace the movement and development of human populations after the first homo sapiens left Africa 100,000 years ago.

(Reed) Two types of lice occur in the New World. Did one come with Europeans and one with the first peoples? If lice helps determine when people got to the New World, we can trace their routes.

(narrator) The lice could help determine what group of people migrated from Asia. Did the lice on North American humans now have DNA more similar to Mongolian lice, or Siberian lice?

(Reed) The parasites are telling us something different about their shared evolutionary history than what we've already learned from their hosts.

(narrator) Reed had an opportunity to go back in time and learn what lice can tell about humans in pre-Columbian South America.

(Reed) A colleague of ours had some Peruvian mummies that were rapidly mummified about a thousand years ago. And these mummy individuals still had head lice. We were able to sequence DNA from those ancient mummy lice.

(narrator) Their evolutionary strengths may be good for research, but can be frustrating for parents and school kids dealing with an infestation.

(Reed) It's such an epidemic because lice are resistant to shampoos.

(narrator) Who would think these tiny creatures could hold clues to the mystery of human migration? Reed is just itching to learn more.

Paleo-anthropologists believe Homo sapiens evolved in Africa 100-200 thousand years ago, and eventually moved out of Africa to populate the globe. But, how can researchers trace the specifics of that human migration? With support from the National Science Foundation, Florida Museum of Natural History Mammologist David Reed has undertaken a novel approach. He studies the genetic diversity and evolution of the human parasite that hitched a ride the whole way: lice.