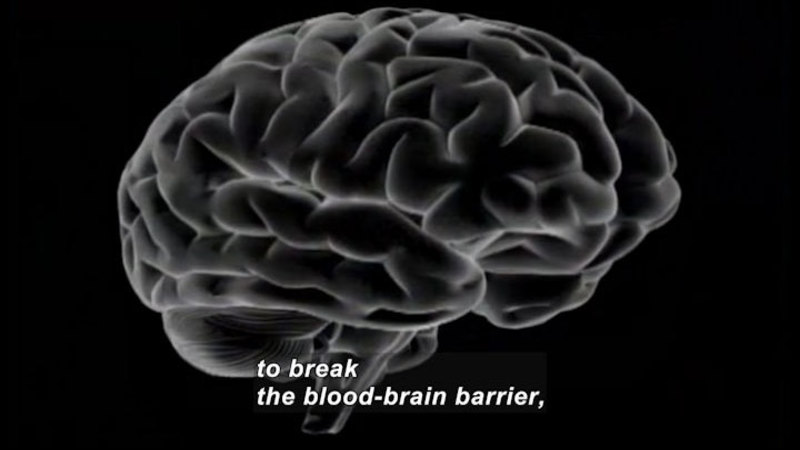 (male narrator) If you want to cure some tough diseases like Alzheimer's or Parkinson's, you better be ready to break some barriers by making some waves-- ultrasound waves. Ultrasound is acoustic wave propagation. If you increase the intensity and pressure of these waves, it can have biological effects on the tissues.

(narrator) With help from the National Science Foundation, Columbia University bioengineer Elisa Konofagou is trying to find a way to break the blood-brain barrier, a defense mechanism that protects the brain from poisons, but also blocks medicines getting through as well.

(Konofagou) The blood-brain barrier is a specialized structure that lines the capillaries of the brain, and it offers additional defense to the brain.

(narrator) But ultrasound may be the way to get through. To test the idea, Konofagou injects mice with some liquid filled with microscopic bubbles, then aims ultrasound waves at their brains.

(Konofagou) This is the ultrasound beam where the ultrasound waves are propagating, directionally hitting the center region of the brain in the order of less than a centimeter in diameter. We effect the specific localized region in the brain, because most diseases are very focalized.

(narrator) Once inside the bloodstream, the injected bubbles mix with the drug of choice, shown here as those purple dots.

(Konofagou) They reach the area of the ultrasound beam, the micro bubbles are set into vibration, and this translates to mechanical stresses.

(narrator) Those vibrating micro bubbles loosen up the tightly joined cells that make up the blood-brain barrier, allowing the drug to pass through. And the drug can now finally reach its target, which is basically the neuron, so that it can trigger neuron regeneration.

(narrator) Konofagou says the technique does not hurt the mouse. It may be years before this will help humans suffering from Parkinson's or Alzheimer's, but these early tests are making some good vibrations.

Elisa Konofagou, a bioengineer at Columbia University, believes ultra sound technology could become be a vital component in treating and perhaps curing degenerative brain diseases. One big problem associated with treating these diseases today is a chemical shield of sorts that protects the brain against chemicals in the blood. Unfortunately, it also keeps out many drug treatments. Konofagou believes ultrasound waves could be one key to turning the blood/brain barrier on and off.