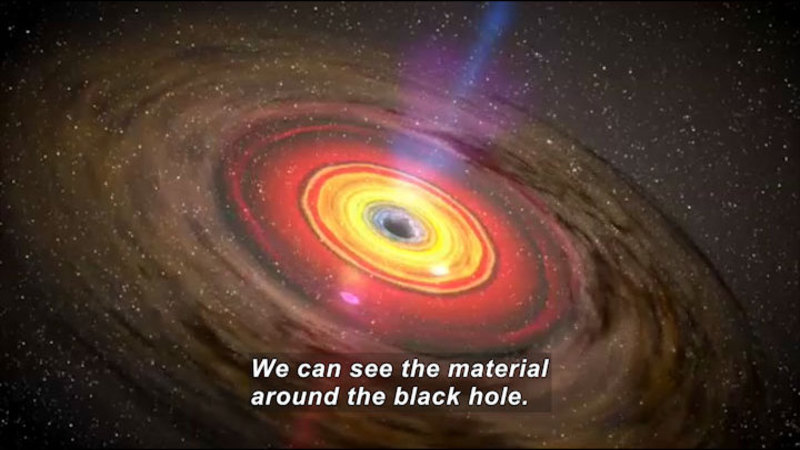 (Describer) Streams of light collide to create a globe filled with water. Title: Science Nation. A shapeless clump of material stretches across the center of a dark sphere.

(male narrator) This is the center of our galaxy, the Milky Way, captured in never-before-seen detail. And those stars? That dense bright clump? Most likely goners. They're breakfast, lunch, and dinner for the supermassive black hole that lurks at the heart of our Milky Way.

(male) We can't see a black hole because no light comes out from it. We can see the material around the black hole. The material spirals inward, like water going down a drain. We could have a very big rear bearing.

(narrator) With support from the National Science Foundation, University of Florida astronomer Steve Eikenberry and colleagues are building and operating a new class of infrared telescope instruments designed to peel back the mysterious layers shrouding black holes, like how they formed.

(Eikenberry) We are really stumped. It's a great mystery in astrophysics. How do you make such a supermassive black hole, and why does almost every major galaxy have one?

(narrator) He says their structure is not complicated.

(Eikenberry) A black hole is a pretty simple thing, when breaking it down. It's any object that has gravity so strong that not even light can escape from its pull.

(narrator) But the finer points, like interaction with their host galaxies, are anything but simple. These are questions Eikenberry is exploring using a new instrument built for the Gemini south telescope in Chile.

(Eikenberry) Is it born as a supermassive black hole? Or are they born small, through merger or accretion, basically consuming material around them, do they grow to become big later on?

(narrator) Eikenberry also studies smaller, so-called stellar-mass black holes. A typical galaxy is full of them. They're born when a big star, like these in the Tarantula Nebula, dies in a huge explosion called a supernova.

(Eikenberry) So we're not studying the black hole really, but the process that forms a black hole.

(narrator) Eikenberry says, big or small, black holes likely function much the same. He's hoping to shed some light on how they work. It would seem black holes have really sucked him in.

Astronomer Steve Eikenberry at the University of Florida is on the hunt for black holes. With support from the National Science Foundation, he hopes to learn more about how particular black holes evolve, why there seem to be supermassive black holes at the center of most if not all galaxies, and what powers them.