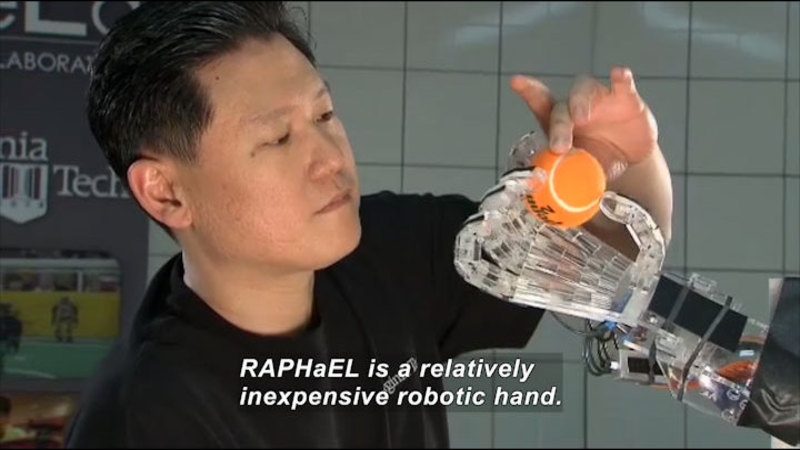 (Describer) Streams of light collide to create a globe filled with water. Title: Science Nation. A robot with arms and legs steps and sways.

(male narrator) You never know where you're gonna find inspiration. For mechanical engineer Dennis Hong, it was there on the silver screen.

(Hong) When I was seven, I saw Star Wars. It completely blew my mind-- all the robots and spaceships.

(narrator) The force has been with him since. Today his lab at Virginia Tech, where Hong applies his trade, is filled with robots

(narrator) With support from the National Science Foundation, Hong and his team are creating Star Wars inspired robots that are acrobats. RAPHaEL is a relatively inexpensive robotic hand.

(Describer) It holds a tennis ball.

It uses compressed air to move and could one day help improve prosthetics. This bot, nicknamed Climber, can scale steep cliffs and is rugged enough to handle the terrain on Mars. IMPASS has wheels and spokes that protrude so it can walk and roll.

(Hong) The application could be search and rescue missions or scientific exploration.

(narrator) HyDRAS snakes its way up dangerous scaffolding, so humans don't have to. Another upcoming project is a firefighting robot. So think of a fire hose that is a robot. It's a robot snake-- it slithers, pops up like a cobra, and can fight fires.

(narrator) Hong and his team are also building humanoid robots. Some are learning to play soccer.

(Describer) One kicks a ball and another falls across the goal to block it. Someone drives a buggy as another rides along.

(Hong) Another project is called the Blind Driver Challenge. We developed the first car that the blind can drive.

(narrator) Many award-winning designs come from Hong's dreams. He jots them down in the middle of the night.

(Hong) I see these weird, colorful shapes in my head, and somehow, these assemble and form these types of robotic mechanisms, I say, "Oh, cool!" and just wake up.

(narrator) Hong is making his dreams come true, not "long ago in a galaxy far, far away," but right here and now. Life imitating art. For Science Nation, I'm Miles O' Brien.

With support from the National Science Foundation, the RoMeLa Lab at Virginia Tech is developing robots to perform a wide variety of tasks and to eventually be able to move and think on their own. The robots in Dennis Hong’s lab climb walls, negotiate bumpy terrain, and type letters.