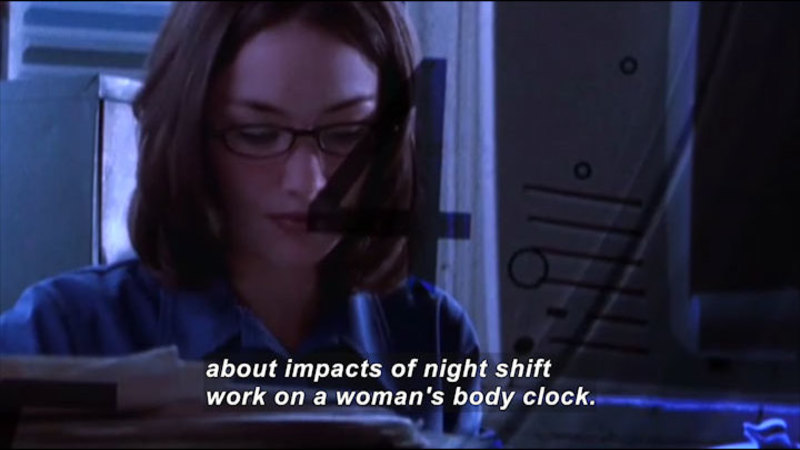 (Describer) Streams of light collide to create a globe filled with water. Title: Science Nation. A house stands in the dimness of morning.

(female) One minute you're healthy, the next minute you have breast cancer.

(Describer) In the kitchen...

(male narrator) Etta May is up early lately, much different than when she was a nurse working nights. I hear cooking.

(Describer) She holds a child.

(May) I was always exhausted. I don't know any nurses, especially night shift nurses, that weren't exhausted. Women working the night shift

have a higher incidence of breast cancer.

(narrator) Virginia Tech molecular biologist Carla Finkielstein wants to know more about impacts of night shift work on a woman's body clock. Can working odd hours alter her body chemistry, turning healthy cells into cancer cells? We are trying to understand how changes in that environment, or conditions, influence the gene expression.

(narrator) With support from the National Science Foundation, Finkielstein uses frog embryos to help figure out physiological changes in women who work the night shift. She says working night owls have abnormal levels of specific proteins in their cells which control the genes that regulate cell growth and division. Finkielstein injects those proteins into the frog cells to study their effects. That could end up in cancer and in many other diseases. But our studies show it results in abnormal proliferation of cancer cells.

(narrator) Finkielstein also studies the role a woman's body clock plays in treating the disease. Using human cancer cells, she tests whether radiation therapy is more effective during different times of the day.

(Finkielstein) People with the disease can receive treatments at a time of the day when the medicine is more effective.

(female) We are the face of breast cancer. I don't know if I could protect my grandchildren or my nieces from this disease. But that's what I would like to do.

(narrator) Survivors say they are up against another clock.

I have daughters and granddaughters. I don't want them to get it. No women should die from breast cancer. Hopefully, in 20 years, you won't interview me about breast cancer. We can talk about something else.

Virginia Tech Biologist Carla Finkielstein is using funding from the National Science Foundation to investigate a possible connection between body rhythms and breast cancer. Her lab is full of frogs because she uses their eggs to study whether circadian rhythms impact cell division, the overall health of a cell, and how a malignant tumor will grow and multiply.