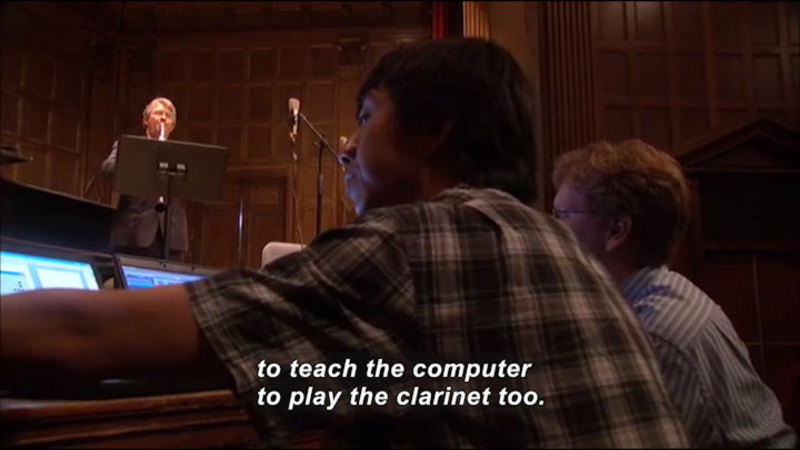 (Describer) Streams of light collide to create a globe filled with water. Title: Science Nation. A man plays clarinet on the stage of a concert hall with two young men with laptops in front.

(male narrator) This is clarinet professor Kenneth Grant at the Eastman School of Music. But who are these guys? Engineering students from across campus at the University of Rochester, using the other side of their brains to teach the computer to play the clarinet too. The computer learns what the musician did

to make the sound that the musician is making. The computer learns that they're blowing pressure at every instant in time, what their mouth-clamping force was on the reed.

(Describer) Bocko plays a bassoon as another man plays a piano keyboard.

(narrator) While you might think an electrical engineer and a music theorist would make a curious combo, Marc Bocko and Dave Headlam are pioneering a fusion of art and science that's music to the ears. The idea is to combine the precision of a computer

with the aesthetic values in music and combine those in a way that's educationally and musically sound.

(narrator) With help from the National Science Foundation, Bocko and his colleagues have also compressed audio files nearly 1,000 times smaller than an MP3 file. But their aim is not to build a better iPod. Bocko says this advancement could revolutionize video conferencing, and someday musicians in different cities could perform together without a noticeable time lag.

(Bocko) So this a small echo-free room where we can place our instruments and do the acoustic measurements that we then turn into a computer model.

(narrator) This is where Bocko does musical forensics, using the tools of his trade on musical instruments.

(Bocko) We're trying to capture the essential physics of how the instrument works.

(narrator) The computer can turn sound into a visual display, showing students the subtle details of their musical notes.

The practicing students can observe a display that helps them to train their ears.

(narrator) Of course computers will never replace the skill and emotion of musicians like oboist Richard Killmer. But as it turns out, music and electrical engineering make for a sweet, albeit unlikely, duet.

University of Rochester electrical engineer Mark Bocko has combined his passion for music with his passion for engineering, devising a way to digitally compress music files. Bocko’s team of engineers and musicians at Rochester’s Eastman School of Music are also helping uncover some extraordinarily precise details about just how music is made. With support from the National Science Foundation, they have built a computer model of the clarinet, entirely from real world acoustical measurements taken from human musicians. Measuring such things as how hard the musician is blowing into the instrument and the pressure the musician applies to the reed, they have modeled the way music is made.