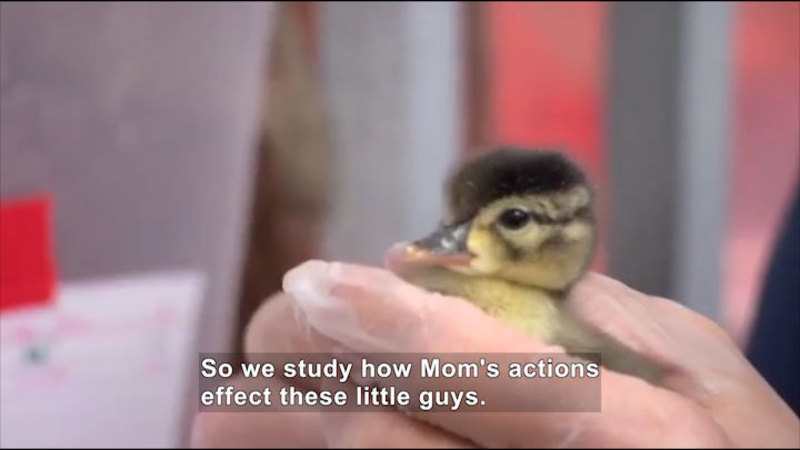 (Describer) Streams of light collide to create a globe filled with water. Title: Science Nation. An eagle stands on the edge of a nest which has a chick inside.

(male narrator) Mama bird knows best about taking care of her babies. But when food gets scarce and she must fly longer distances to find it, her egg-sitting time drops off. What impact does this have on her brood?

Everybody knows, from a human health perspective, that what a mother does during pregnancy can have many effects on her babies.

(Describer) He holds a duckling.

So we study how Mom's actions effect these little guys.

(female) Look closely and you can see the embryo moving right here.

(narrator) With support from the National Science Foundation, ecologists Bill Hopkins and Sarah DuRant are studying wood ducks to better understand the impact of Mom's nesting behavior on her ducklings and their ability to survive. How much time a female spends on her nest will influence the temperature of the nest.

(narrator) A slightly cooler nest can dramatically alter the health and vitality of a duckling. They incubate eggs at different temperatures to simulate warmer and cooler nesting conditions.

(DuRant) Our embryos in the lowest temperature will develop slower than ones in higher temperatures.

(narrator) And once hatched...

(Hopkins) They may look healthy, but if you dig a little deeper, they have many physiological deficits. Their immune systems aren't developing as rapidly, so they appear to be developmentally stunted. We see changes in endocrine function and stress hormones, and they swim slower than ducks from the same clutch. Swimming is a critical part of their early survival.

(Describer) He puts a duckling in a pool to swim.

They must avoid predators.

(narrator) This research is not just about wood ducks. It has implications for birds that have their nesting behaviors and habitats disrupted.

(DuRant) If their immune system isn't functioning well and disease comes along, they're not going to make it.

(Hopkins) If you have an area subjected to ecotourism,

where you may have disturbance around nesting areas, that may come at a cost.

(narrator) That could adversely effect health and vigor of future generations. Hopkins and his team want to learn about what it takes to keep these little guys thriving and following in Mom's footsteps.

What happens to the size and health of ducklings if their mothers have to leave the nests for long periods of time to get food? That’s what Bill Hopkins, a fisheries and wildlife professor, hopes to find out, with support from the National Science Foundation. Hopkins’ research team at Virginia Tech, including wildlife Ph.D. student Sarah DuRant, is studying how environmental factors influence hatchlings, incubation, and overall survival of wild ducks.