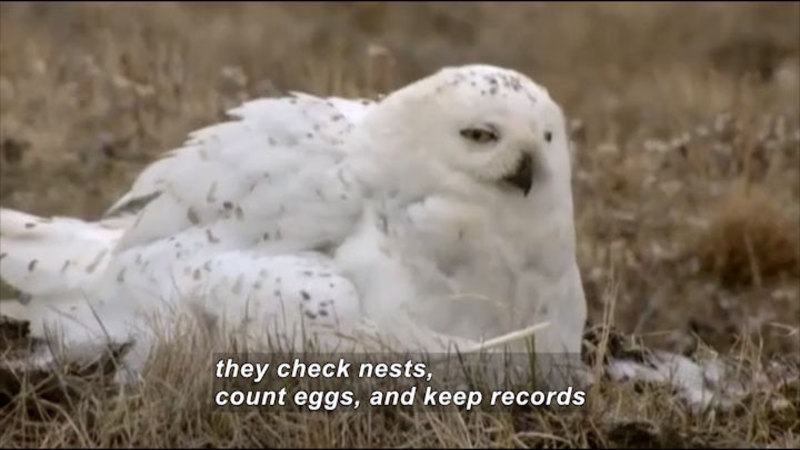 (Describer) Streams of light collide to create a globe filled with water. Title: Science Nation. A duck, with a grey and brown body and a green head, stands on a patch of grass.

(female) What's amazing to me is when I come here, I always see something interesting or new.

(Describer) A woman walks on a footbridge.

Laura Burkholder checks up on some of its fine feathered residents.

(Burkholder) Tree swallow nests are amazing. They will put feathers in the nests that helps keep the nestlings and eggs warm.

(Describer) A bird constructs a nest.

With help from the National Science Foundation, she coordinates the efforts of thousands of citizen scientists. Armed with notebooks and mirrors in cities and backyards, they check nests, count eggs, and keep records until the chicks take flight. They connect with these birds, and they have a sense of following them through their nesting cycle and share that information.

(narrator) Data from trained volunteers helps behavioral ecologist Janis Dickinson track bird diseases, behavior, and changing breeding habitat. We need to see these problems at large geographic scales, and we can only do that with citizen science if we want to predict climate change's effect on birds and look at the effects that climate change has had.

(narrator) They can view live nest cams from across the U.S. Even long before the Internet, bird lovers were lending Cornell scientists a hand. Caren Cooper uses the old and new in her research. The birds we see today, these are nesting records of their great, great, great, great grandmothers.

There are over 350,000 nest records on nearly every species of bird in North America.

What I find really fascinating about birds is their diversity.

With help from the National Science Foundation, Cornell University’s Ornithology Lab is tracking bird breeding biology and the impact of climate change on bird populations. Some of the best information they are getting is from dedicated “citizen scientists” who provide critical data on what kinds of birds are nesting where, the number of eggs laid, and the number of chicks hatched.