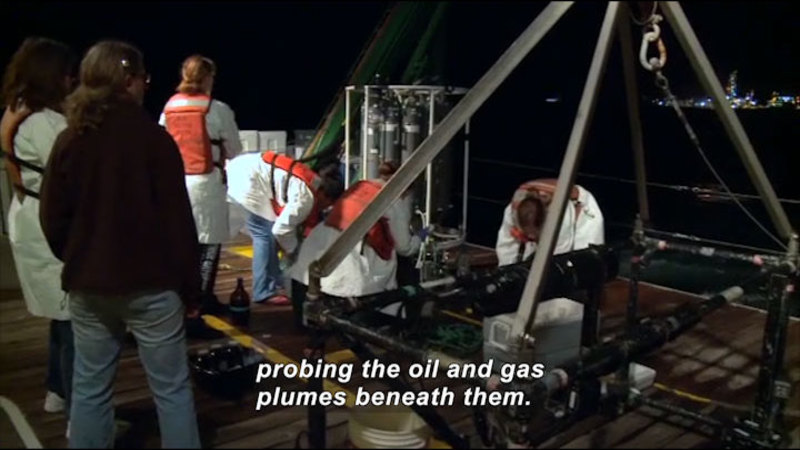 (Describer) Streams of light collide to create a globe filled with water. Title: Science Nation. Someone on a ship pulls up a bucket of sludge from the water.

(male narrator) The devastation on the water was easy to see.

(Describer) Flames rise from a complex.

Within weeks of the Deepwater Horizon oil spill, University of Georgia marine scientist Samantha Joye and her team were out on the water training their expert eyes under the surface of the Gulf of Mexico, probing the oil and gas plumes beneath them.

(female) There's going to be much impact in the deep water and sediments, and there may be gas in the water.

(narrator) With a Rapid Response Grant from the National Science Foundation, Joye embarked on a two-week research cruise. The work and the smells could be intense.

(Joye) It was nauseating.

(narrator) Her team tracked a plume 20 miles long, three miles wide, and hundreds of feet below the surface.

(narrator) Joye says methane could create more dead zones in the gulf by killing deep water ecosystems. Marine microbes feast on the oil, but in the process, they eliminate oxygen, killing plants and animals.

(Joye) These ecosystems need the one thing

that can be extracted by this oil spill, which is oxygen.

(narrator) Joy is troubled by the dispersants used to break up the oil.

(Joye) There's already problems with oil and gas. Why do you amplify that by adding this unknown?

(narrator) The researchers say they felt a sense of urgency when the sampling bottles reached the deck.

It was pretty much all units to stations. Let's get the water, start analyzing.

I can't believe this clear-looking water smells so much like gas.

(narrator) One night, one rescued bird put the devastation into perspective for the team.

(Joye) Animals like that bird-- whales, sea turtles, and fish

(Describer) They wash it.

and every organism inhabiting the Gulf of Mexico is being exposed to an atrocity.

(narrator) Joye says the oil and gas that cannot be seen is more difficult to track and understand. And diligent ongoing studies of these ecosystems will be crucial to the gulf's long-term recovery.

Will the oil spill in the Gulf of Mexico create dead zones? That’s the concern of University of Georgia marine scientist Samantha Joye. She’s headed to the gulf to investigate how the oil and methane gas discharged by the BP Deepwater Horizon spill is impacting the ocean microbes that live there. With funding from National Science Foundation, she is also looking at how the dispersants used to break up the oil are impacting marine life, including microbes, fish, and shellfish.