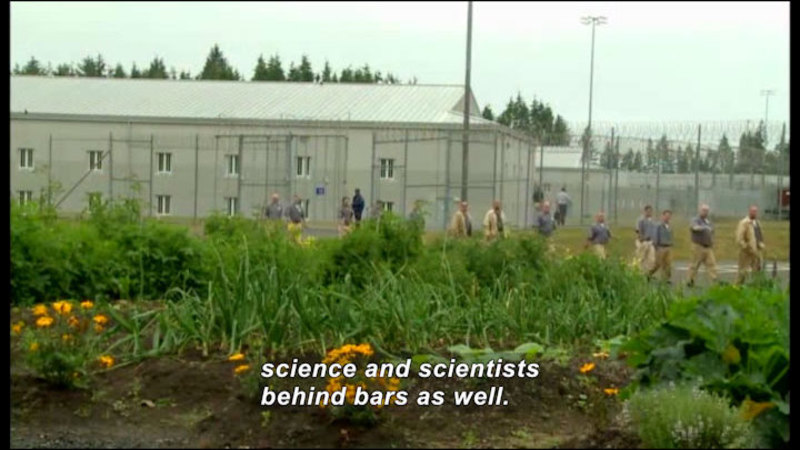 (Describer) A man looks down through a magnifying glass.

(female) By including prisoners in my science projects,

I get groups of people who have time and space, and have a deep interest in nature.

(narrator) You heard right. With help from the National Science Foundation, forest ecologist Nalini Nadkarni and her team study rare prairie plants nowhere near the prairie. They're behind the walls and razor ribbon at the Stafford Creek Corrections Center in Aberdeen, Washington. You're getting better at the amount of seed per cell.

(narrator) The inmates aid the researchers by planting seeds, observing plant growth, and then recording data. Most of us have taken, and now it's time to give back.

(narrator) Terry Essick is serving 20 years as an accomplice to murder.

(narrator) Nadkarni studies the dwindling prairie plants, trying to learn how to cultivate them in their natural environments. You are fast, man.

(narrator) The effort is appreciated here in the narrow confines of incarceration. For anybody to actually make the effort to see this through... is great.

(narrator) It's a win-win proposition-- a science redemption, if you will. Scientists get a reliable staff of long-term research assistants. Inmates get a job that beats stamping out license plates. It teaches me something, makes me work with people, and it's a new skill that I've learned.

(narrator) Resultantly, the learning goes in both directions, which leads Nadkarni to an ironic hypothesis about human nature.

(narrator) Her journey inside prison has led to even more irony. It's terribly depressing to walk into a prison, to know that some men will be there for the rest of their lives-- I walk away enlightened.

(narrator) Other prisons are now interested in bringing science and scientists behind bars as well.

(Describer) A garden grows on the grounds.

In the Pacific Northwest, people are stripping moss for the horticultural trade at such an alarming rate that it's now illegal to harvest it. Ecologist Nalini Nadkarni knows that moss is a key component to the eco-system of the region, which makes it important to study. But this globe-trotting scientist at The Evergreen State College needed a lot of help recording research data from some folks who have much more time than she does. Where better to find potential research assistants with lots of time on their hands than the nearby medium security Cedar Creek Corrections Center? With support from the National Science Foundation, Nadkarni’s idea has been so successful that now the prisoners are starting bee keeping and composting programs, in addition to growing and recording data about moss.