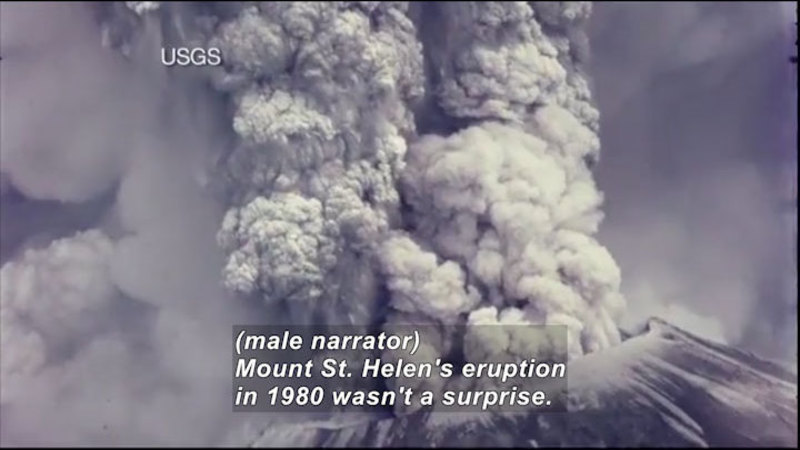 (Describer) Streams of light collide to create a globe filled with water. Title: Science Nation. Clouds of ash rise from the slanted top of a volcano.

(male narrator) Mount St. Helen's eruption in 1980 wasn't a surprise. But even today, the extent of the damage is hard to fathom.

(male) It began with the largest landslide in recorded history that uncorked a horizontal explosion, leveling the forest 13 miles out from the volcano.

(narrator) It knocked down 100-foot trees like matchsticks and killed just about everything in its path.

It was just a barren landscape, gray and pumice colored, covered with rocks.

(narrator) Ever since, the mountain has hardly been quiet, with several smaller eruptions. But nothing like what happened here in 1980. Dead tree trunks still litter the landscape. But look closely: something else is erupting here--life.

(Bishop) It's a rare opportunity for scientists to get to study a devastated area, and how it recovers, in such detail.

(narrator) With help from the National Science Foundation, evolutionary biologist John Bishop is documenting the return of living things to the once lifeless mountain.

(Bishop) Until ten years ago, the landscape has been completely dominated by lupine.

(narrator) Bishop says these flowering lupine plants are able to create new soil from volcanic ash. That soil created a habitat for the Sitka willow. But there's a problem.

(Bishop) We've realized these willows are not getting big. That's important because they create habitat for birds and mammals.

(Describer) Tiny fat worms are inside.

You get a bunch inside and they'll kill the stem.

(narrator) Weevils, an invasive species, are on the attack, taking up residence inside the willow's stems, stunting their growth or killing them.

(Bishop) Seemingly insignificant organisms, like insects that consume plants, play an extraordinarily important role in the sorting out process of deciding, essentially, which plants will stay here and which ones will disappear.

(narrator) Bishop says plants and insects will battle back and forth here for centuries. It's how nature balances out the ecosystem until the day Mount St. Helens changes the equation once again.

The area of Southern Washington State around the Mount St. Helens Volcano has been nearly devoid of life since the 1980 eruption – making it a biology lab like no other as scientists observe it springing back to life. The regenerating ecosystem offers biologist John Bishop of Washington State University in Vancouver a chance to study what happens as the mountain springs back to life. Bishop and his team are learning that recovery of an ecosystem is unpredictable and fragile, particularly by observing the impact of a small invader species insect from the weevil family.